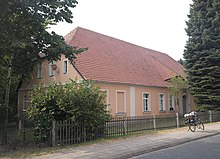 After attending the city school in Anklam and the (old and new language) grammar school in Klosterbergen , he studied Protestant theology at the University of Halle from 1752 , a. a. as a pupil of Siegmund Jakob Baumgarten . Adelung was a co-founder of the local Masonic Lodge Philadelphia to the three golden arms in 1756 , of which he became first secretary; consequently, he must have been accepted into Freemasonry earlier .

In 1758 Adelung became professor (teacher) at the Evangelical Ratsgymnasium in Erfurt . In 1762 he was appointed to the Saxe-Gotha Council, but did not take up a position in Gotha. From 1765 he lived in Leipzig , where he worked as a translator, proofreader and editor. From 1769 he edited the Leipzig newspapers here, and also worked on the Jenaer Allgemeine Literatur-Zeitung and the General German Library .

In his history of human folly , published in seven volumes from 1785–1789 , he made fun of superstition and obscurantism in an enlightening way . He presented astrology, for example, using the example of the Renaissance scholar Lucas Gauricus : some of his prognoses had come about “by accident”, which “after the event was magnified by dear simplicity” and contributed to his fame.

In 1787 Adelung was appointed senior librarian of the Electoral Library in Dresden, but often left the representation to the second librarian Karl Wilhelm Daßdorf . The daily opening of the library and the successful continuation of the work of Johann Michael Francke (1717–1775) in the new domicile, the Japanese Palace , are attributed to nobility.

In 1793, Adelung also took over the duties of a librarian in the private library of Elector Friedrich August III.

Adelung died on September 10, 1806 in Dresden and was buried in the Inner Neustädter Friedhof . His handwritten estate came to the Dresden public library in 1828, and his map collection followed later.

Adelung is best known for his German dictionary, but has also worked in numerous other areas and published translations, his own literary texts, historical, scientific, educational and journalistic works.

Adelung's most important work is his grammatical-critical dictionary of the High German dialect (1774–1786, 2nd edition 1793–1801), which for him is the Meißner chancellery language in the narrower sense , which is preferred. The subtitle is also essential: with a constant comparison of the other dialects, especially the Upper German , whereby his work offers the most extensive synchronous inventory of the German language to date . The comparative synonyms added to the lemmas are often commented on in a relatively detailed manner, and he also goes into the different meanings in the language areas. There are quite a lot of orthography-related reference articles and many technical or special language lemmas (20–30% in the first edition). He often shares his views on orthography, some lemmas on groups of letters seem to have been included primarily for this reason. Over time, Adelung became more skeptical of the spelling reforms, and finally, in the preface to the second edition, he fought his own earlier attitude and sometimes wrote words differently (for example, -iren instead of -ieren in verbs). There are pronunciation marks , even more in the second edition for foreign words that have not yet been naturalized ( engineer 'Inschenör'). Scattered throughout the work is a highly streamlined vocabulary on 18th-century German. He goes into this in more detail, especially with the lemmas on particles and prefixes. With regard to etymology, today's principles are alien to him; he knew nothing of the Germanic and High German phonetic shifts , knew no New High German diphthonging and no monophthonging ; Regular sound changes, ablaut and the now reconstructed Indo-European word formation suffixes are also unknown to him. However, correct etymologies can sometimes be found. A complete etymological commentary - if available - consists of three parts: First, there are information about "similar" word forms from other language stages, then an overview of the etymology of his predecessors, which he knows well, and finally his own etymology. They seem to document Herder's treatise on the origin of language (1772) in single words.

Adelung's dictionary had a major influence on German lexicography, but the exact extent is relatively little known. With regard to the exact subject of the dictionary (What is Standard German? What did Adelung actually work on lexicographically?), There is a “pluralistic lack of orientation” in research. At least the Upper German can be added to the dictionary subject despite negative comments. The same applies to the question of whether his work was normative or descriptive (or both). Especially because of the extensive comparisons, the dictionary had a normative influence on the development of the German language. According to Kühn and Püschel, “it can still be doubted that he sets the language standard, because in the 50s of the 18th century. there was already a much-read, poetic national literature that largely followed a uniform language standard ”.

In addition, the adelung s spelling goes back to the author , which was used in parts of the German-speaking world from the middle of the 19th century, and from the Second Orthographic Conference in 1901 to the spelling reform of 1996 in the entire German-speaking area with the exception of Switzerland for the » ß « was binding, but has since been replaced by the Heysean s spelling .

A detailed bibliography of Adelung's writings is given by Strohbach, 1984, pp. 8–35.