Inner Neustädter Friedhof with a view of the oldest 1st country

The Inner Neustädter Friedhof is one of the oldest cemeteries in Dresden and is located south of Bischofsplatz in the Leipzig suburb . The name refers to the original location of the cemetery within the Dresden fortifications . Numerous preserved baroque graves make the Inner Neustädter Friedhof one of Dresden's cemeteries of particular cultural and historical interest .

The Inner Neustädter Friedhof was originally located on the site of today's Dreikönigskirche and served as a cemetery for the residents of Altendresden . As early as the 16th century, due to lack of space, moving the cemetery to the Scheunenhof district was considered, but this was not realized until 1731 when the Dreikönigskirche was rebuilt. The Inner Neustädter Friedhof was laid out on today's Friedensstrasse, at that time outside the city walls, whereby a few important graves of the "Dreikönigsfriedhof" were relocated to the Inner Neustädter Friedhof. The basic plan of the new cemetery was designed by the architect Johann Georg Maximilian von Fürstenhoff ; the first burial took place in 1732 in what is now the 1st Land area, which can be entered directly from the main entrance on Friedensstrasse.

Wall grave of Johann von Armstrong before the restoration

In the 1st country there are a large number of baroque tombstones. In addition, 17 baroque crypt houses were built on the western cemetery wall, such as the family crypt of the sculptor Johann Gottfried Knöffler . The grave of the Imperial Russian Real Councilor Johann (Iwan) von Armstrong , who died in 1869 and shows an elaborately designed ship, is one of the artistically most important wall graves in the cemetery.

A first expansion of the cemetery was made during the Seven Years' War in 1759, going east, and today forms the so-called 2nd land, on which mainly graves from the 19th century are located. It is separated from the first land by a broken wall.

In the course of industrialization and the associated population growth in the cities, a second expansion took place in 1846, which is now referred to as the 3rd country and can be entered directly via the entrance on Bischofsplatz . The 3rd land with graves from the 20th century is also separated from the 2nd land by a perforated wall. Today the Inner Neustädter Friedhof has reached three times its original size with an area of ​​around 3.5 hectares.

Armstrong epitaph, condition since restoration in 2009

The Inner Neustädter Friedhof is still used for burials today. Due to the age of numerous tombs, some of which are of monumental character, the preservation of important tombs is increasingly important. Many of the old grave sites are threatened with decay or are already badly damaged. The massive old trees, which presumably developed from the grave plantings themselves, also lead to damage to old graves through strong roots. The "Innerer Neustädter Friedhof Initiative" has been committed to gradually securing and restoring important graves since 2008. 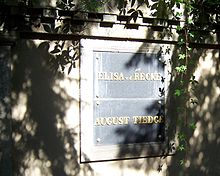 Grave of the sculptor Robert Diez

The grave of Julie Vogel, wife of the painter Carl Christian Vogel von Vogelstein , is interesting in terms of design . Your grave sculpture was created by Franz Pettrich . The “Saxon Heritage Protection Memorial” commemorates the founder of the Saxon Heritage Protection Association, Karl Schmidt, and his employees, Oswald Hempel and Werner Schmidt (1868–1952).

On the 3rd land there is also the grave of Bertha and Johann von Vieth, the parents of the writer Ludwig Renn .

The "Dresden Dance of Death"

The "Dresden Dance of Death"

The Dresden Dance of Death was located on the north wall of the Inner Neustädter Friedhof from 1731 to 1975. The relief was created by Christoph Walther I around 1535 and shows 27 figures, including three depictions of death. It has a length of 12 meters and a height of 1.20 meters.

From its original place at the old Georgentor , the frieze came into the possession of the Dreikönigsgemeinde as a gift from Augustus the Strong , who first attached it to the “Dreikönigsfriedhof” and from 1731 to the inner city cemetery on the north wall. Due to severe weather damage, the “Dresden Dance of Death” was removed in 1975 and found its final place in 1991 under the organ loft of the Dreikönigskirche.