Memorial plaque on the house at Brüderstraße 13, in Berlin-Mitte 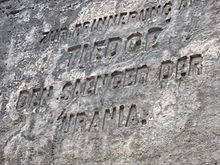 Tiedge was the eldest son of the principal of the scholarly city school in Gardelegen and his wife. He studied law in Halle and in 1781 accepted a position as private tutor.

In 1788 Tiedge moved to Halberstadt , where he became secretary to Canon von Steder four years later. After Steders' death, Tiedge and his family moved to the vicinity of Quedlinburg . After the death of Frau von Steder in 1797, he lived alternately on trips in Halle and Berlin. From 1805 to 1808 he accompanied the writer Elisa von der Recke through Germany, Switzerland and Italy. From 1819 Tiedge stayed in Dresden as its partner.

A great love and friendship bound the two companions even after death. After Elisa von der Recke died on April 13, 1833, Tiedge was able to continue to live in the shared apartment, where nothing could be changed, thanks to her precautionary instigation. He received a not inconsiderable pension and was looked after by the Pappermann family, who were devoted to his benefactor.

A circle of friends who came together every evening provided the poet with diversion and helped him to get over the death of his long-time friend.

Due to an accident in the summer of 1838, the 85-year-old poet's physical and mental condition deteriorated considerably. After taking another bathing trip to Karlsbad in 1840 , he spent the following winter in good shape. Tiedge died on the night of March 8, 1841 after a few evenings before having felt a little unwell.

Tiedge's fame did not last. He never made it out of the shadow of his role models like Johann Wilhelm Ludwig Gleim and others. a. to kick, and his smaller poetic works were known only to a few. Only his main work Urania (Halle, 1801), "a poetic treatment of the Kantian philosophy based on a rationalistic view," made Tiedge's name stay in the memory of many people, but his elegies and mixed poems (Halle, 1803) also celebrated his Time success.

“Was there a god? Will he one day fulfill
what the longing promises to cry? Will this enigmatic being reveal itself
before some world judgment
?
Man should hope! He doesn't ask! "

In addition, Beethoven's songs The Luck of Friendship (op. 88, 1803) and Air cosaque (WoO 158a No. 16, 1816) are based on texts by Tiedge. Beethoven and Tiedge met in Teplitz in the summer of 1811 and since then have had a correspondence from which some letters of friendship from Beethoven have been preserved.