The title of this article is ambiguous. For the provost of Stendal and protonotary of the Mark Brandenburg see Seger von Gardelegen .

The Hanseatic city of Gardelegen is a medium- sized town in the Altmark district of Salzwedel in Saxony-Anhalt . After Berlin and Hamburg, it is the third largest city in Germany in terms of area . Only the core town of Gardelegen has urban structures, the other 48 districts and the numerous residential areas are scattered in rural areas.

Gardelegen is located in the southwest Altmark between Berlin and Hanover , north of Magdeburg . Neighboring communities are Klötze and Kalbe (Milde) in Altmarkkreis Salzwedel, Bismark (Altmark) , Stendal and Tangerhütte in the district of Stendal and Burgstall , Westheide , Calvörde and Oebisfelde-Weferlingen in the district of Börde. Since the incorporation of 18 formerly independent municipalities on January 1, 2011, Gardelegen has been the third largest city in Germany after Berlin and Hamburg with an area of ​​over 630 km² . Striking and widely visible landmarks of the city are the three towers of the Nikolaikirche , the town hall and the Marienkirche . In addition, the nearby Altmark military training area in the Letzlingen district is a location for the Bundeswehr in the Hanseatic city of Gardelegen.

The city is divided into 26 localities (former municipalities). They include the same name and other districts with living spaces.

Districts (former municipalities) that did not form a village: 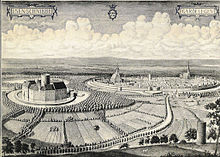 Aerial view of the city center from the northwest

Inner city of Gardelegen, aerial view from the northeast (2014)

The first written mention comes from the year 1121 as Gardeleve , when the Halberstadt bishop Reinhard confirmed the statutes and property of the Schöningen monastery .

A mention of Gardelege as the seat of the Heinricus comes de Gardelege is dated to the year 1186. Count Heinrich von Gardelegen , a brother of Margrave Otto II of Brandenburg, appears this year as a witness to a document from the Bishop of Brandenburg, which is in the Brandenburg Cathedral monastery archive. In the fiefdom of Brandenburg goods to the Archdiocese of Magdeburg, Gardelegen is also mentioned in 1196 as a castle (castrum) and Flecken (oppidum) (see also Gardelegen Castle ). The award of the brewing rights took place 1314. Since then has been in Gardelegen Garleybier brewed. In 1316 the city acquired the Schulzenamt and with it the "High Jurisdiction". Gardelegen joined the Altmark League of Towns in 1353 and the Hanseatic League in 1358 . In 1488 there was a beer squire dispute with the elector. In 1553 the construction of the city fortifications with Magdeburg, Stendaler and Salzwedeler Tor was completed.

In the years 1658, 1667 and 1685 city fires destroyed large parts of Gardelegen. In 1715 Gardelegen received a Brandenburg-Prussian garrison. After the formation of the district of Gardelegen with 144 villages, Gardelegen became a district town in 1816.

In 1937 Gardelegen became a garrison town again, and the riding and driving school of the province of Saxony on Bismarker Landstrasse became the remonteschool for cavalry training .

In the final phase of the Second World War, 52 people died on March 15, 1945 in an attack by the 8th Air Force on the railway facilities at Gardelegen. The Nikolaikirche and other buildings were destroyed. On April 13, 1945, a mass murder took place near Gardelegen: in the Isenschnibber field barn , the SS murdered 1,016 concentration camp prisoners on the instructions of the NSDAP district leader Gerhard Thiele and with the support of the townspeople. A day later, the city was handed over to the US Army without a fight . In the summer of 1945, as agreed, the Americans withdrew from the part of the Soviet occupation zone they had occupied . Red Army troops moved into Gardelegen.

In 1952 Gardelegen became a district town in the Magdeburg district . On March 10, 1964, the Soviet anti-aircraft defense shot down a US RB-66 reconnaissance aircraft near the city . The occupation was accused of espionage. Gardelegen lost its district town status on July 1, 1994 and has been a district town of the Altmarkkreis Salzwedel ever since. Since May 28, 2008, the city has had the addition of the Hanseatic City to its name . From June 24th to 26th, 2011, the city hosted the 15th Saxony-Anhalt Day , which took place under the motto “On all roads - off to Gardelegen” and was attended by around 150,000 guests.

→ Main article : List of incorporations in the town of Gardelegen

The local elections on May 26, 2019 resulted in the following composition of the Gardelegen City Council:

The coat of arms was approved on July 5, 2004 by the Ministry of the Interior.

Blazon : “Split in silver; at the front of the gap a red eagle with golden armor, at the back three green hop plants with umbels and leaves growing on green stalks.

The colors of the city are red-white-green.

The oldest known seals date from the years 1309 and 1327 and already show five whips next to the half Brandenburg eagle , which apparently were supposed to represent hop stalks , as the brewing trade was already widespread in Gardelegen at the beginning of the 14th century. All later seals and coats of arms clearly show hop poles with leaves and flowers, with four and three poles. Today there are three, which also corresponds to the representation of the coat of arms carved in stone from 1553 on the Stendaler Tor.

Gardelegen has partnerships with the following cities:

On April 13, 1945, 1,016 concentration camp prisoners were murdered in a barn on the Isenschnibbe estate on the northeastern outskirts of the city . Concentration camp guards, air force soldiers, members of the Reich Labor Service , the Volkssturm and other local actors were involved in the surveillance and murder . The order for mass murder was given by the NSDAP district leader Gerhard Thiele , who was convicted in absentia in the Soviet occupation zone in 1946 , but was able to go into hiding in what would later become the Federal Republic and died in 1994 as an "innocent citizen" under the name of "Gerhard Lindemann" near Bochum .

There are the following schools in the Hanseatic city:

The largest companies in Gardelegen include Eldisy GmbH, Wipag Nord GmbH & Co. KG, AKT Altmärker Kunststofftechnik GmbH and NTN Antriebstechnik GmbH. Ikea had Billy shelves produced by their daughter Swedwood in Gardelegen during the GDR era. In September 2009 it was announced that production with 250 employees will be stopped due to sales problems and will be relocated to another location.

The Garley brewery existed from 1314 to 2013. In the 19th century, Gardelegen and the Altmark were among the most important hop-growing areas in Germany.

The B 71 Magdeburg - Salzwedel - Uelzen and the B 188 Wolfsburg - Stendal - Rathenow cross in Gardelegen .

In addition, the Hanover – Berlin high-speed line and the parallel Berlin – Lehrte railway run through the town. The city's five train stations are located at the latter ; In addition to a train station in the core town of Gardelegen, there are train stations in the districts of Miesterhorst, Mieste, Solpke and Jävenitz. The railway line to Haldensleben branched off from Gardelegen station until 1951 . Today only one Bundeswehr barracks in Letzlingen is served over this route . Gardelegen is usually every hour of regional trains of Abellio Rail Central Germany towards Stendal and Wolfsburg with Alstom Coradia LINT trains on serve.

Local public transport is provided, among other things, by the PlusBus of the Saxony-Anhalt state network . The following connection leads through Gardelegen:

The Gardelegen airfield with the status of a special landing site is located west of the city and is operated by the Gardelegen Aviation Club.

Cities and municipalities in the Altmarkkreis Salzwedel