Decree of the Führer on the formation of the German Volkssturm of September 25, 1944 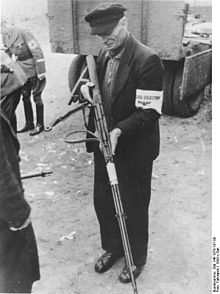 The German Volkssturm was a German military formation in the final phase of the Second World War . It was after one of the NSDAP outgoing propagandistic call for all able-bodied men aged 16 to 60 years beyond the previous military service formed to defend the "homeland" of the German Reich, "to see the future of Germany and its allies and Europe securing peace guaranteed ". The aim of the appeal was to strengthen the armed forces .

The formation of the German Volkssturm was made public on October 18, 1944, the 131st anniversary of the Battle of Leipzig , and officially announced two days later. As a result, the first Volkssturm associations that had been set up on a Führer decree of September 25, 1944 could be demonstrated effective propaganda . 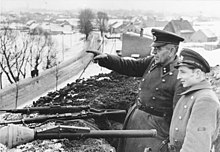 Call for the Volkssturm in a reporting office, October 1944

Swearing in of Volkssturm men

The area of ​​responsibility of the Volkssturm comprised primarily construction and excavation work, security tasks and the defense of localities, mostly in the immediate home region.

The military organization, training, armament and equipment were to be provided by the replacement army , which was subordinate to the Reichsführer SS and chief of army armaments Heinrich Himmler . The formation and management of the Volkssturm battalions were placed in the hands of the Gauleiter , who were supposed to use the management staff of the local organizations of the NSDAP, the SA , the SS , the NSKK and the HJ . Martin Bormann was given the authority to issue the “political and organizational” implementing provisions. He ordered that the Volkssturm be set up according to local NSDAP groups and district groups in companies and battalions, and issued provisions on the equipment and identification of the Volkssturm men.

The establishment of the Volkssturm was accompanied by extensive propaganda activities. The Volkssturm was not part of the Wehrmacht. The men were without uniform and apart from an infected armband without identification as combatants under the Hague Land Warfare Regulations , which they did not enjoy protection.

Oberfeldwebel of the Panzer Grenadier Division "Greater Germany" during the training of Volkssturm men on the machine gun 42 in East Prussia, October 1944

“Decree on the formation of the German Volkssturm” on the Berlin advertising column, 1944 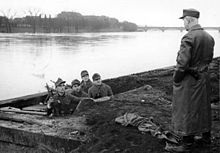 Volkssturm men on the Oder , the soldier on the far left carries a Volkssturm rifle VG 1-5.

According to the German population statistics, around six million men would have been obliged to take part in a national storm. However, this was opposed to the requirements of the war economy . Declines in production should be avoided as far as possible. According to age and fitness, the people liable to the Volkssturm were classified:

As a rule, initially only the first two contingents were formed and drawn up. Young people born in 1928 were drafted who had been fully socialized during the Nazi regime. Seventy percent of the age group volunteered for arms service . An ordinance issued by Wilhelm Keitel on March 5, 1945 extended compulsory military service to all male relatives born in 1929.

It is not known how many men served in the Volkssturm. Major General Hans Kissel , head of the "German Volkssturm Command Staff at the Reichsführer SS", estimated that over 700 Volkssturm battalions were deployed in contact with the enemy .

Volkssturm men with bazookas in Königsberg in January 1945

The Volkssturm was only poorly equipped and trained, which is why the military effect was rather limited. In some places Czech, Italian, Norwegian or French booty rifles were available, often without sufficient ammunition. According to Kissel's list of weapons requirements from November 1944, contingents I and II required 1.3 million handguns in the enemy-threatened districts alone; only 18,575 were available. Instead of a nominal strength of 75,000 machine guns, only 181 were available. Gun training and shooting training were pointless due to the lack of weapons and ammunition. Many stayed away from training, although an absence could be sentenced under the Military Criminal Code.

The Volkssturm was deployed in the east between mid-January and mid-April 1945 in the cities of the Reich that had been declared “ fixed places ” such as Breslau and Posen , to defend the Oder line, in Pomerania and during the battle for Berlin . The fear of revenge and atrocities by the Red Army strengthened the will to fight. 15,000 members of the Volkssturm, together with soldiers of the Wehrmacht, repeatedly driven by Gauleiter Karl Hanke , defended the besieged Breslau for months until May 1945. Although the Nazi propaganda tried to pass the Anglo-American occupation as horrific as the Soviet, the Volkssturm battalions on the Western Front quickly gave up the fight. The American intelligence service summarized an experience lasting several months as follows:

"Nowhere on the Western Front was the Volkssturm capable of even holding out skirmishes or putting up door-to-door resistance, which is what it was set up for."

Overall, the Volkssturm suffered high losses with little military impact. The exact number of victims is unknown; It is believed that most of the 175,000 members of the Volkssturm reported missing have died.

The strategy of Bormann and Joseph Goebbels , through fanatical resistance and thus also for the Allies increasing numbers of war casualties, to wrest a slack peace after all, did not work. Corresponding hopes were based on the German assessment that public opinion, especially in the countries of the Western Allies, would turn against the strategy of the Western governments to continue the war without restrictions until the German armed forces surrendered unconditionally if the number of victims remained high .

Prisoners of war men from the Volkssturm were interrogated - like other German soldiers - by the American "Military Intelligence", that is, by units whose task it was to provide military intelligence. In the reports of the CPM / MID (Captured Material and Branch Personel / Military Intelligence Division), the Volkssturm appeared either as a militarily worthless compulsory union of old men or as an NSDAP-controlled instrument with the task of arresting deserted Wehrmacht soldiers.

From a legal point of view, the members of the Volkssturm were soldiers during their missions within the meaning of the German Defense Act of 1935. This law made it possible to expand the number of conscripts beyond the age of 45 in order to raise additional reserves for the defense of the Reich.

Since the Wehrmacht could not provide sufficient uniforms, numerous members of the Volkssturm wore “fantasy uniforms”, such as those of the Reichsbahn , recolored party or Hitler Youth uniforms, old uniforms of the imperial army or common civilian suits. An armband with the inscription " Deutscher Volkssturm - Wehrmacht " marked his relatives as combatants , even if they fought in the uniform of the Hitler Youth or in civilian clothes.

The name Volkssturm should be binding for all units, but the Gauleiter of the Reichsgaus Tirol-Vorarlberg Franz Hofer arranged that the Volkssturm battalions of the Gau were internally named Standschützenbataillone , and even gave them their own diamond- shaped sleeve emblem with a Tyrolean eagle on the swastika and the inscription "Standschützen Bataillon (place)". Furthermore, the Sauerland Freikorps of the Gau Westfalen-Süd was integrated into the Volkssturm in October 1944 and retained its name and badge there.

The Adolf Hitler Freikorps was a combat unit of the Volkssturm set up in Germany towards the end of the Second World War .

On March 28, 1945, Adolf Hitler ordered the association named after him to be set up (see BA-ZNS / WA 11g). As Reich Propaganda Minister Joseph Goebbels informed the Gauleiters of the NSDAP in a letter on March 30th, this should consist of " activists of the movement, volunteers of the Volkssturm and volunteers of the Werkschar" and of Robert Ley , the head of the Reich organization of the NSDAP and leader of the German Labor Front , to be commanded; each Gau should set up a "Gauschwarm" of 1000 men. The candidates for the Freikorps should be politically trained in the sense of the NSDAP and have basic military training. The rejection of a volunteer registration on the grounds that the volunteer is indispensable in the administration is not permitted due to the urgent war situation. Each volunteer should be provided with a food ration for three days.

The "Gauschwärme", which were subdivided into "Kreisschwärme" and "Einzelschwärme", should be set up on the military training areas of the Wehrmacht, which were located in the Gau. The uniform should consist of training pants, uniform jacket, hat, camouflage suit and armband with the inscription "Freikorps Adolf Hitler", the armament of assault rifles, bazookas and hand grenades. Bicycles should give them some mobility.

The units were subordinated to the army for use and also supplied by it. The Wehrmacht referred to the units as Panzerjagdkommandos or Panzerjagdverbände.

The Volkssturm is documented in detail in the Vienna Army History Museum . Uniforms and armaments of the Volkssturm are exhibited in the republic and dictatorship area .