The title of this article is ambiguous. Further meanings are listed under Panzerfaust (disambiguation) . 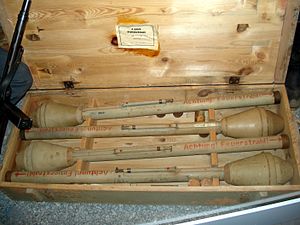 The Panzerfaust (also anti-tank tube ) is a German reactive anti-tank rifle from the Second World War . The weapon, which was produced in large numbers, was designed for anti-tank defense. Due to its great popularity and the striking effect of the name, the bazooka became a synonym for the entire type of weapon.

Cutaway models of the grenades of a fist cartridge and Panzerfaust 60, the conical shaped charge is clearly visible

The Panzerfaust fires shaped charge projectiles according to the recoilless gun principle . The recoil energy of the projectile is compensated for by the energy of a mass or amount of gas moving backwards in the opposite direction. The rearward beam can be fatal at close range.

The launching device (tube) was actually designed as a disposable weapon. However, the pipes were often collected at company, battalion or regimental level and reloaded in the armory.

On the launch tube is a hinged metal rail that serves as a simple, open sight . There are holes in the metal rail (perforated rear sight) with meter specifications (30, 60, 80 for bazooka 60). The top of the grenade serves as the grain.

The bazooka was shot either from the shoulder or under the shoulder, wedged between the upper arm and the torso.

Volkssturm men with bazooka in Königsberg in January 1945 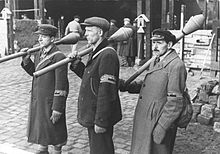 In 1942, the Panzerfaust was developed on the basis of the fist cartridge , which was manufactured by Hugo Schneider AG and produced in the Schlieben subcamp . It was a simple launch tube with a total weight of less than 10 kg. On the top of the tube was a simple hinged aiming device with a trigger. At the front was a 3.3 kg projectile containing approximately 1.6 kg of explosives.

The new weapon was first reported in the press in mid-1944 at the same time as the Panzerschreck . Before, "Panzerfaust" was only used in the sense of "fighting power of tanks" or "Panzerschreck" synonymously for "fear of tanks".

Another model, the Panzerfaust 150, with a range of 150 meters, was produced from February 1945 until the end of the war in a comparatively small number of around 100,000. Characteristic was the grenade, which was longer and narrower, which made it more streamlined . An optionally mountable splinter ring (so-called "splinter fist") improved the possibility of use as an anti-personnel weapon. The Panzerfaust 150 was, like its predecessor, a non-reloadable disposable weapon.

A reloadable variant was planned, but its development was not yet completed before the end of the war. This reloadable Panzerfaust 250 never got beyond the planning phase. The launching device was also completely changed, because it now resembled a pistol grip with an ordinary trigger . The range and the grenade have also been improved. Both the US and the Soviet Union captured plans for the weapon. The Panzerfaust 250 therefore significantly influenced the development of the Soviet RPG-2 .

According to Eike Middeldorf , the effective use was limited to less than 80 meters. When the Red Army surrounded its tanks with a protective belt of infantry in a radius of 100 to 200 m in January 1945, the shooting successes collapsed drastically, and close tank combat was only possible when there were particularly favorable hiding places.

As an ally of Germany (until September 1944) Finland was also supplied with bazookas. The Red Army captured large quantities of the bazooka and also used them, since they had no comparable weapon of their own.

Nowadays, after replacing the long-used light Panzerfaust 44 mm and the heavy Panzerfaust 84 mm " Carl Gustaf " for anti-tank defense, the Bundeswehr uses the Panzerfaust 3 .