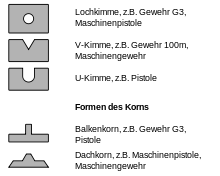 Slide latch of an air rifle

As open sights aiming devices are referred to firearms that do not contain optical elements such as lenses. Aiming aids in general are used to “target” a target in such a way that a shot hits the target at a defined distance.

Among the open sights include front and rear sights , rear sight and folding visors.

To avoid annoying light reflections, the surfaces of open sights are often made of particularly dark and light-absorbing materials. Sports shooters often provide these with a deep black, extremely thin layer of soot from a small flame in addition or to be on the safe side. Especially with often used or older weapons, so-called blackening or sooting of the sights is the only way to eliminate light reflections.

The rear sight can be adjusted in height in order to be able to hit targets at different distances. The projectile of a weapon describes a ballistic curve and decreases with increasing distance from the muzzle. Therefore, the shooter must aim at a point above the target in order to hit. Since this is seldom possible, the rear sight is adjusted in height, whereby the target and barrel axes intersect. There are distance markings on the rear sight that mark the intersection of the axes for the specified distance. As a rule, the rear sight consists of the base plate, which describes a curve corresponding to the respective weapon, and the upper part with the actual rear sight and the locking slide. For military weapons with a rear sight and front sight, the curve is usually milled and the slide engages in side notches in the upper part; for simple recreational weapons, the lower part is punched and provided with notches.

The front sight is the part of the sighting device located near the muzzle. There are different designs, a basic distinction is made between bar grain and ring grain , whereby the beam grain is further subdivided into roof, pearl and classic beam grain .

The folding sight (also standing, ladder or frame sight) is a metal frame that is attached upright on the weapon. Usually it can be folded up to protect it from damage when not in use, hence the name. The shooting distance is adjusted by moving a slide that has a rear sight up and down.

Instead of the rear sight, a rear sight can also be used on the folding visor. This was common, for example, with long-range firearms from the late 19th century, possibly in addition to the sliding chimney. 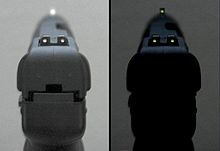 Special visors are used to fire a targeted shot even in low light or even in the dark. The shooter should recognize the rear sight and the front sight. A distinction is made between night visors for darkness and visors for low light conditions.

Visors were painted with paints containing radium early on, but they were abandoned because of the damaging effects of ionizing radiation . Later attempts were made to use afterglow phosphorescent colors . This did not catch on because these colors had to be charged with a light source (e.g. flashlight) in the dark before they could be used. There were also experiments with small light sources ( incandescent lamps , later light-emitting diodes ), which were fed by a battery and activated by a switch . These visors with bulbs were impractical, partly because they needed a battery. Tritium gas light sources , which are incorporated into the rear sight and front sight, have prevailed . Since tritium gas light sources emit little, but nevertheless ionizing radiation, they are not without problems. They also darken over time.

Visors for low light conditions are made with glass fibers . The glass fibers collect the light along their length and emit it at the opening. The advantages of the fiber optic sights are that they don't give off ionizing radiation, don't darken over time, and are quite robust. The downside is that they won't work in complete darkness.