The title of this article is ambiguous. For the Swiss Ordonnanzwaffe see Parabellumpistole (Switzerland) . 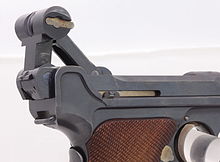 Artillery 08 with drum magazine and bulletin board 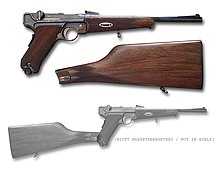 The Parabellum pistol , also known as the Luger , is a self-loading pistol . The orderly weapon , introduced in the German Reich in 1908 as the pistol 08 , was designed by the Austrian Georg Luger .

The name “Parabellum” comes from the Latin saying si vis pacem para bellum (“If you want peace, prepare for war”) and was the trademark and connotation of the Deutsche Waffen- und Munitionsfabriken AG (DWM).

Georg Luger worked for the arms manufacturer Ludwig Loewe & Co. (later DWM). On the basis of the Borchardt self-loading pistol C93 , he developed a pistol in the caliber 7.65 mm Parabellum , which retained the buckled knee joint , but was much smaller, more manageable, more reliable and generally more practical. This first serial parabolic pistol appeared in 1900 and is now also referred to as the "old model". It had a flat locking head without a charge indicator, the closing spring was a leaf spring , and the joint heads were milled asymmetrically and had a hook that was supposed to prevent the knee joint from buckling.

As early as 1900, the Swiss Army introduced this parabolic pistol as the Mod. 1900 pistol . All Swiss Parabellum orderly pistols had a palm safety device and 120 mm barrels. The models 1900 (up to weapon number 5100) and 1900/06 (up to weapon number 15215) were manufactured by DWM Berlin. Between 1918 and 1933 the weapons factory in Bern produced a series of these pistols ( weapon number 15216–33089); these weapons largely corresponded to the mod. 1900/06 and were labeled "Waffenfabrik Bern". A further simplified variant, the model 1906/29, was produced between 1933 and 1946 at the same location in Bern (weapon number 50001-77941). It can be recognized by the handle, which is no longer curved at the front, as well as the longer palm safety device and the non-corrugated joint heads. All models were also made for the civilian market.

Shortly after its appearance, Luger began to further improve and simplify the design of his pistol (use of a coil spring as a recoil spring, elimination of the knee joint lock, grip safety device, bolt catch, redesign of the extractor to become a charge level indicator, introduction of a model in caliber 9 mm Parabellum , alternative barrel lengths 100 and 150 mm, optional: a groove for stop shaft). The "new model", which was successful on the civil market, was born. The 9 mm Parabellum caliber specially developed for the Parabellum pistol is one of the most common calibers for pistols and submachine guns today.

Having become aware of the design, the procurement offices of various countries began testing the parabolic pistol.

In 1904 the Imperial Navy introduced a Parabellum pistol in caliber 9 mm Parabellum (with bulletin board and 150 mm barrel), known as Pistole 04 (the often used designation Marine-08 , however, is incorrect).

In 1908, the Emperor's Highest Cabinet Order (AKO) introduced the pistol 08 as an orderly weapon in the German Reich (100 mm barrel, 9 mm Parabellum). It became world famous as a service pistol and is still popular today. During the First World War , the so-called Lange Pistole 08 (200 mm barrel, sliding visor, bulletin board, 32-round drum magazine), popularly known for short as Ari-08 ("Ari"), also appeared as a light carbine replacement for artillery troops. is the abbreviation for "artillery" in military jargon). The artillerymen behind the front did not need rifles and were given pistols that were easier to carry.

The main characteristic of the weapons is the kinked knee joint lock, which bends upwards when firing instead of running back in a straight line, as is usually the case. The Parabellum pistol is therefore very safe to shoot, because even with a massive malfunction, no parts can fly into the shooter's face. The long return of the fork piece and bolt , which is guided with the tightest tolerances, as well as the front sight attached directly to the barrel ensure - measured for example on the Browning bolt - an extraordinarily high level of intrinsic precision of the weapon. However, the closure is sensitive to dirt and requires high manufacturing precision. The ammunition must also be matched to the weapon. An unsuitable or incomplete type of cartridge (depending on the manufacturer) sometimes means that the case is not ejected after the shot, or causes the slide to slide back incompletely into its starting position ("ammunition sensitivity").

Is problematic for the security that even the disassembled weapon is not ready for shooting when a cartridge in the firing chamber infected. This led to several accidents, so that the P 08 got a charge level indicator. Models that were procured by the police also received a Schiwy safety device that blocks the trigger mechanism as soon as the cover plate is removed.

The pistol 08 is one of the most popular handguns . It was initially manufactured by the German Arms and Munitions Factory (DWM) in Berlin, and later by numerous other manufacturers (e.g. Krieghoff with around 13,850 model 08 pistols ) and state arms factories. A license production in Great Britain at Vickers is also documented. From 1934 to 1942, the production of the pistol 08 was set up at the Mauser works in Oberndorf am Neckar. Various versions of the 08 pistol were also manufactured there from 1971 onwards, including a sports weapon with a micrometer sight and a heavy match barrel. Until well into the 1980s, Mauser regularly released special models, including the 75 Years Pistole 08 model and a new edition of the "Long Pistole 08".

Parabellum pistols - especially the P 08 version - are highly sought after as collectors' weapons today. The P 08 is also used for sport shooting. However, the weapon, the magazine and the ammunition must be coordinated so that the P 08 can be used as a reliable sporting weapon. The pistol was developed purely as a weapon of war for close combat by troops. A high accuracy of the pistol was never intended. The notoriously creeping trigger and the fact that military parabolic pistols are zeroed in at 50 m require some experience and patience from the shooter.

A special variant is the 08 “Astra” pistol, of which around 400 were produced for the South American market. It corresponded to the Artillery-08, but had a wooden fore-end and could give continuous fire. The German sports, Schreckschuss- and signal weapons manufacturer Umarex GmbH & Co. KG produces the P08 as alarm gun and in three variants as CO 2 -Sport and leisure weapon. 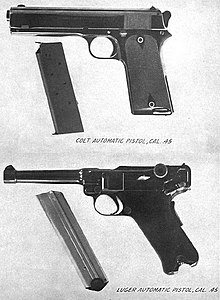 Test weapons: Colt Model 1905 (above) and Parabellum (below)

When the United States made attempts to introduce a service pistol in the early 20th century, parabellum pistols were also examined. A parabellum pistol in caliber .45 automatic was only barely defeated by the Colt M1911 that was finally introduced .

The P 08 was the standard pistol of the German army in the First and Second World War , but was gradually replaced by the Walther P38 from 1938 .