Ludwig Loewe & Co. was a German company in mechanical engineering , in the armaments industry and in the electrical industry with its headquarters in Berlin , which existed in various legal forms and under varying companies from 1861 to 1942/1943. The original purpose of the company was trading in machines, later the production of sewing machines , machine tools , firearms and ammunition was added. As early as the 1890s, arms production and the recently developed interests in the electrical industry were outsourced, after which the company focused on mechanical engineering for over three decades.

Around 1861, Ludwig Loewe founded Ludwig Loewe & Co. as a general agency for machines. In 1869 the conversion was carried out in a partnership limited by shares under the company Ludwig Loewe & Co. KGaA , initially with the addition of production of sewing machines . From the 1870s, the company received orders from the Prussian army to produce rifles and ammunition. In addition, it manufactured machine tools , steam engines and tubular boilers according to the "Belleville system". In the 1880s, the production of sewing machines was gradually discontinued.

The company had a controlling stake in the Mauser brothers' arms factory . Hugo Borchardt had developed the Borchardt C93 , which was manufactured in series at Ludwig Loewe & Co. A Loewe employee was Georg Luger , who developed the Parabellum pistol from the C93, including the magazine and the associated ammunition.

After Ludwig Loewe's death in 1886, his younger brother Isidor Loewe (1848–1910) took over the management of the company, in which he had joined in 1875 as an authorized signatory and from 1878 onwards he had been junior boss.

In 1892, Ludwig Loewe & Co. AG and the machine works Thyssen & Co. participated in the establishment of the Union-Elektricitäts-Gesellschaft (UEG) operated by the US company Thomson-Houston International Electric Company , which in 1903 formed an interest group with AEG entered and the following year with her completely merged was.

In 1893 it was converted into a stock corporation . In 1894 Loewe received a license from Hiram Maxim to manufacture the Maxim machine gun . In the same year, the company for electrical companies (Gesfürel) was established as a financing and investment company , in which, in addition to Loewe, AEG and various banks were involved.

In 1896, Ludwig Loewe & Co. founded the Deutsche Waffen- und Munitionsfabriken AG (DWM) together with Mauserwerke and Metallpatronen AG . Because of this outsourcing, the company's own production of weapons and ammunition was largely discontinued around 1898, and the company concentrated on machine and tool construction “according to the American system” and the manufacture of standard parts . From the early 20th century, she also ran an iron, metal and injection molding shop as well as her own laboratory.

In 1897 license production of the typesetting and line casting machine Typograph was started, which was spun off to Typograph GmbH before 1925 . 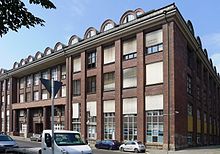 A new building for the company's headquarters with exhibition rooms was built in 1908–1910 based on a design by the Berlin architect Alfred Grenander in Berlin-Moabit , Huttenstrasse 17–19. Grenander also designed the 1914–1916 new building for the milling and drilling machine factory, Wiebestrasse 42–45 / Huttenstrasse 45–48, which is now known as “Ludwig-Loewe-Höfe”. Both buildings are under monument protection .

For the sale of machine tools in the Rheinisch-Westphalian industrial area , the company had a sales office in Düsseldorf , which had been housed in its own, newly built office building at Wilhelmplatz 3/8 (today Konrad-Adenauer-Platz) opposite Düsseldorf Central Station since 1911. The representative building, known as the "Ludwig-Loewe-Haus", one of the first reinforced concrete structures in Düsseldorf, was taken over by the Rheinbahn in 1939 , heavily modified through renovations and demolished after 1945.

The company's share capital was converted to 15 million Reichsmarks in November 1924 after inflation and currency reform . In the mid-1920s, Erich Loewe , Ernst Huhn and Oskar Oliven formed the board, supported by Heinrich Moring as deputy board member. At the same time, several major German banks and some of the companies closely associated with holdings were represented on the Supervisory Board.

In 1936, to support AEG , which had got into financial difficulties, it was agreed that Gesfürel would buy new AEG shares issued as part of a capital increase for a total of 25 million Reichsmarks and that both companies would send representatives to the supervisory board .

By the spring of 1937, in the course of the “ Aryanization ”, all “Jewish” board and supervisory board members had to leave their offices under pressure from the National Socialists. The descendants or heirs of Ludwig and Isidor Loewe were forced out of the company and left Germany; the annex Ludwig Loewe & Co. was deleted from the company's name. Finally, Gesfürel was merged with AEG in 1942/1943.

In 1892 Hermann Ahlwardt accused the Ludwig Loewe & Co. company of delivering faulty rifles 88 to the army in order to weaken Germany militarily in the sense of a Jewish-French conspiracy. The anti-Semitic abuse word “Jewish rifles” made the rounds. When his accusations proved untenable, Ahlwardt was sentenced to five months ' imprisonment for defamation , which he did not initially have to serve due to parliamentary immunity .