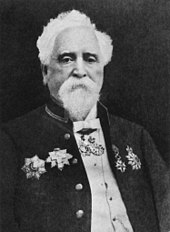 His most important invention, the Maxim machine gun

He designed the first machine gun , which was successfully tested at Hatton Garden in 1884 and unveiled in 1885. This Maxim machine gun used the recoil of a shot to load the next cartridge or to fire continuously . In order to prevent the weapon from being blocked by soiling from powder residue, he developed Maximite , a smokeless gunpowder made from trinitrocellulose and nitroglycerin , for which he received a patent in 1889.

Over the next two decades, the armed forces of more than 20 nations were equipped with his machine guns, although the generals often underestimated the true military value of the machine gun. The weapon could fire around 500 rounds per minute, which meant the firepower of 100 repeater rifles . It was used for the first time in 1893 by British troops when they conquered Matabeleland in Rhodesia (now Zimbabwe ). For the production of the Maxim machine gun, Maxim founded the Maxim Gun Company, which merged with the Swedish competitor Nordenfelt in 1888 .

Hiram Maxim began as a coach builder and instrument maker in the US state of Maine and moved to the workshop of his uncle Levi Stevens in Fitchburg (Massachusetts) in 1864 . He had invented a gas lamp. In 1868 Maxim moved to the Novelty Iron Works and Shipbuilding Company in New York City as a draftsman . During this time worked on improving gas lighting.

He later became chief engineer for the First Electric Lighting Company . Since 1877 he has been working, among other things, on improving the electric light bulb invented by Thomas Alva Edison , which he wanted to make more efficient and durable. During this time he received several patents .

In 1880 he traveled to Europe and in 1881 visited an exhibition on electricity in Paris . Apparently someone there told him that if you want to make real money, you have to invent something that Europeans can use to kill each other more easily. Maxim moved to London shortly afterwards and set up a workshop in Hatton Garden, a street in the Holborn district of the London Borough of Camden .

In 1894 Maxim constructed an aircraft powered by two steam engines , which was even able to rise briefly into the air during a test in Bexley Heath ( Kent ), but was held by guide rails for safety due to a lack of practicable control. With a weight of 3.6 tons, a wingspan of 31.5 meters and a length of 21 meters, it was the largest aircraft for a long time.

In 1901 Maxim was raised to a Knight Bachelor degree by Queen Victoria . Maxim received 271 patents on his inventions. Among other things, he invented a mousetrap , a hair wave iron and smoke-free gunpowder . His son Hiram Percy Maxim invented the silencer , initially for weapons, later it was also adapted for cars.