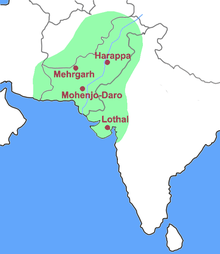 Harappa: worktops of the "industrial area"

Model of a charioteer with a team of oxen. Cast bronze , around 2000 BC Chr., New Delhi National Museum .

Harappa is a village in Pakistan . A historic town on the upper reaches of the Indus , located next to the village, is named after this place . Along with Mohenjo-Daro , this was the dominant center of the Bronze Age Harappa or Indus culture . The cities had around 2500 BC. Around 40,000 inhabitants each.

After 1800 BC The town fell into oblivion until Sir Alexander Cunningham carried out the first excavations in 1872/1873 . But only after further work after 1920 have the age and importance of Harappa been recognized. Further excavations took place from 1995 to 2001. However, in the mid-19th century, the city's bricks were used as material for building a railway line. This completely destroyed a large part of this ancient city.

From the surviving remains it can be seen that the city consisted of two parts. In the east was the actual residential town and in the west the so-called citadel , which was surrounded by a strongly fortified wall. Storage facilities and workers' quarters could still be examined to the north of this . The few remaining remains of the actual urban development point to a chessboard-like city ​​map. Air-dried and baked clay bricks were used as building material. The streets had masonry, plastered sewers. A cemetery was excavated south of the city . It is one of the few known cemeteries of the Indus culture.

In Sumer found harappische workpieces and from remote areas originating materials suggest that Harappa was a trading center. The production of copper , bronze , precious metals and their processing with techniques such as casting , driving , forging and chasing was known. The quality of the jewelry found indicates a highly developed craftsmanship.