The title of this article is ambiguous. Further meanings are listed under Heino (disambiguation) .

Heino (born December 13, 1938 in Düsseldorf ; actually Heinz Georg Kramm ; also active under various pseudonyms such as Gio Bilk , Bilk Gio, G. Bilk, H. Bilk and others) is a German musician . Known as a pop singer and interpreter of German folk songs , he turned to other genres in the course of his career . His striking appearance with blond hair and black sunglasses as well as his characteristic baritone made Heino a folk music icon. As of 2013, Heino said it had sold over 50 million records.

Heino was born as the son of the dentist Heinrich Kramm and his wife Franziska in the Düsseldorf district of Oberbilk . His father was Catholic, his mother Protestant. His grandfather, Bartholomäus Kramm, was a cantor in Cologne-Dellbrück. His two cousins ​​were pastors. Heino's father, who had a dental practice in Cologne-Kalk , died on August 2, 1941 during World War II . Heino started school in 1944 in Großenhain, Saxony . As a half-orphan , he lived with his mother and sister Hannelore, who was five years older than him, in Pomerania until 1945 , where they were evacuated . After the war ended, the family returned to Düsseldorf.

From August 1952 he completed an apprenticeship as a baker and confectioner in Düsseldorf . He finished his vocational training with the journeyman's examination at the Düsseldorf Chamber of Crafts in June 1955. As a young man he also played football at SC Schwarz-Weiß 06 in Düsseldorf-Oberbilk. He is still in contact with the club today. His first marriage was in June 1959 with Henriette Heppner, then 18 years old. From this marriage the son Uwe was born in 1960, and the divorce took place in 1962. In 1968 he became the father of an illegitimate daughter who committed suicide at the end of November 2003 - just like her mother in 1988, Heino's childhood sweetheart. In 1965 he married his second wife Lilo, from whom he divorced in 1978. Lilo Kramm died on January 28, 2010 of pancreatic cancer.

Because of his protruding eyes , caused by an illness from Graves' disease , Heino has always been wearing very dark sunglasses in public since the 1970s, which, as a kind of trademark, make his appearance unmistakable. On earlier record sleeves, Heino is shown without glasses with blue eyes. The city of Bad Münstereifel issued an identity card with sunglasses on the passport photo , the Federal Ministry of the Interior made it clear after a press report that this was not allowed, but the identity card is still in use and no new one has been issued.

In April 1979 he married his third wife, Hannelore Auersperg , whom he met in 1972 during the Miss Austria election in Kitzbühel . The couple has lived in the historic Kurhaus in Bad Münstereifel since 2009 and ran Heino's Rathaus-Café on the market square from 1996 to 2012 . An externally operated café called HEINOS Café has existed in the historic Kurhaus since 2012 . 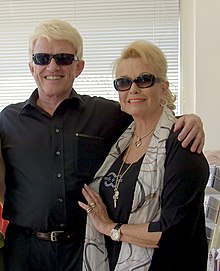 Heino with his third wife Hannelore Kramm (May 2008)

In 1961 Heino appeared for the first time with the OK Singers Trio (Dino Engelhardt, Heino, Dieter Wolf), with moderate success. Even so, the OK Singers recorded a record in the 1960s .

Heino's big breakthrough came after he was discovered by pop star Ralf Bendix during a performance with his group “Comedien Terzett” in Quakenbrück in 1965 , who then produced it for 20 years. His first record, Jenseits des Tales (actually the B-side of the single; the A-side was called 13 Mann und ein Kapitän - the cover version of a Freddy Quinn song ), sold more than 100,000 times. His first long-playing record was released in 1967. Numerous other hits followed - with the participation of the songwriter Erich Becht and the lyricist Wolfgang Neukirchner ("Adolf von Kleebsattel") - and many television appearances, including in the ZDF hit parade and in the Star Parade . He reached the peak of his career in the mid-1970s with the hits Blau blooms der Enzian , with which he was also seen and heard in the film Blau blooms der Enzian , and Die Schwarze Barbara . From 1977 to 1979 he was also seen in the 14-part series Sing mit Heino on ZDF .

His songs are mostly folk songs that are interpreted in the style of pop music, for example Blau blooms der Gentian is an adaptation of the folk song When the sun rises at four on Sunday morning (Das Schweizermadel) . He has also recorded classical melodies such as the Ave Maria by Bach / Gounod or Ave verum by Wolfgang Amadeus Mozart .

In the 1980s things became a little quieter for Heino artistically. In 1983 he sang the song of the ARD television lottery Sunshine - happiness .

In the early 1990s he achieved success again with his own television series on the private broadcaster Sat.1 ( Hallo Heino und Heino - the show ). The rap versions of his hits Enzian and Schwarzbraun ist die Hazelnut in 1989, with which he also wanted to appeal to young people, also brought him a successful return .

Heino has toured all over the world, but especially in Germany. For his 50th stage anniversary and his 40th anniversary of the record in 2005, Heino hosted the music show Heino - the show on ARD with the two co-presenters Stefan Mross and Maxi Arland . 5.8 million viewers saw the anniversary show, for which a live album and a DVD were also released. In August 2006 he played for the first time at the Chinese Wetten dass ..? (Xiang tiaozhan ma?) At the CCTV-3 transmitter .

On October 22, 2005, Heino began his farewell tour through twenty-five cities in Germany in Trier . In 2009 he started his two-part album project “Die Himmel Rühmen” - Festliche Lieder with Heino, on a classical music tour through classical buildings, including churches. In 2011 a DVD was released with live recordings of this tour. 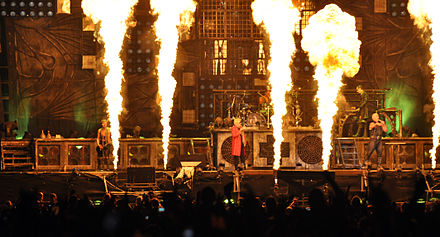 Heino together with Rammstein at Wacken Open Air 2013

On February 1, 2013, he released the studio album With Kind Regards . The album contains twelve cover versions of well-known German-speaking pop , hip-hop and rock songs . Accompanied by extensive advertising measures, the album caused controversy even before the release date. In the first few days after its release, the album was downloaded from the Internet more often than any other work by a German artist and entered the German album charts at number 1. On August 1st, Heino appeared as a surprise guest at the metal festival Wacken Open Air and played together with Rammstein the song Sonne , which he had covered on the album Mit freundlichen Grüßen .

On December 12th, 2014 Heino released the album Schwarz blooms der Enzian , on which he reinterpreted his hits in metal style. The music and staging deliberately borrowed from Rammstein .

Heino was appointed as a juror for the twelfth season of Deutschland sucht den Superstar , which was broadcast on RTL from January to May 2015 .

In spring 2019 the now 80-year-old Heino completed a farewell tour for his album "und Tschüss" . After he had initially announced that he would not give any more concerts after this tour, he then refrained from these plans due to the positive response. For 2020 he announced a classical tour with an orchestra, during which he would like to interpret classical works by Franz Schubert , Wolfgang Amadeus Mozart and Johannes Brahms , for example .

Heino was criticized when he in 1983 and 1986, a tour of the time because of its apartheid system internationally outlawed South Africa undertook - in spite of the UN - embargo and despite a cultural boycott of many international artists. The fact that Heino sang all three stanzas of the Deutschlandlied on a record produced for teaching purposes at a request of the then Prime Minister of Baden-Württemberg Hans Filbinger in 1977 brought him back then and still brings him criticism. He sees himself innocent and describes a television program about the handover of the records as the cause of the “disgusting scandal”. He had previously secured himself with lawyers and politics, so he was aware of the explosiveness of the subject.

In an interview with the Austrian newspaper Die Presse in April 2014 , Jan Delay described Heino, who covered a song by his band Beginner among other things , as " Nazi " on Mit freundlichen Grüßen 2013 . Heino then filed a complaint against Delay through his lawyer . The legal dispute was settled out of court, with Delay undertaking to pay damages in the amount of 20,000 euros.

In March 2018, Heino gave the North Rhine-Westphalian Home and Local Authority Minister Ina Scharrenbach (CDU) the music album he had sung, The Most Beautiful German Home and Fatherland Songs, for the first NRW Home Congress . Although none of these songs had its origin in the Nazi era , there were several pieces that were also in the SS songbook , such as The God Who Made Iron Grow or When Everyone Is Unfaithful . This fact was criticized in media reports. Heino replied: "The songs can't help it if they have been instrumentalized". Scharrenbach also expressed her lack of understanding of the criticism: "Here an artist has brought a present from a minister, and that is it". In Stern has commented on the criticism of Heino go misses the point: "criticism of it could have been but should express in 1981, appeared as the plate. That this music causes a stir decades later probably has other reasons that have little to do with Heino. "

Due to his striking appearance, Heino is the object of many parodies , including Otto Waalkes in Otto - The Film , where he parodied both him and Michael Jackson's thriller with an idiosyncratic version of Black Brown Is The Hazelnut to the beat of Thriller .

An injunction in 1985 against Norbert Hähnel (guest singer of the group Die Toten Hosen ), who appeared as his doppelganger and “The true Heino”, was successful in court.

Heino is the godfather of a café in the Phantasialand amusement park , which bears the name “Heinos Kaffeehaus”, and has been the official godfather of the Bethel children's hospice for dying children since January 2010 .

In 2010 Heino lost a lawsuit against an insurance company for an amount of three and a half million euros. Heino and the organizer then had to bear the costs for a canceled concert tour.

In 2015, Heino supported the SPD candidate Werner Esser in the election of the mayor of Bad Münstereifel .

Heino made a cameo in the ARD production Willkommen bei den Honeckers , which first aired on October 3, 2017 .

After Mildred Scheel founded the German Cancer Aid in 1974, Heino declared his solidarity with her in the fight against cancer. Like Peter Alexander , Marika Rökk and other stars, he supported the aid organization at events. Most recently, at the age of almost 80, Heino appeared in the 2018 ZDF Gala Welcome to Carmen Nebel for the tenth anniversary, which made a donation of 3.2 million euros for the German Cancer Aid Foundation .

Heino received numerous gold and platinum records for his music. In addition, the following honors:

NoteHeino returned the "Bambi" in protest against the controversial award of the rapper Bushido with the Bambi for "Integration" in November 2011.