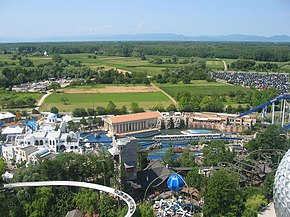 View of the Europa-Park Rust

An amusement park is either a permanent amusement park that combines several attractions on a larger area - rides (carousels, bumper cars, roller coasters, etc.), show booths , shows , exhibitions , museums - or a park with extended options, such as various leisure facilities (e.g. B. playgrounds, mini golf or climbing walls), for leisure activities and relaxation .

There are various approaches and suggestions for the definition of amusement parks in the specialist literature. A modern, concise approach defines, classifies and typologizes theme parks as follows:

"An amusement park is understood to mean all offers created for the general public, consisting of several artificial or natural leisure elements, which are grouped together in delimited areas or rooms to form an organizational unit under administrative and marketing law and enable people to be active in the design and spending of their individual leisure time Demand feelings. "

According to this definition Parks are again divided into three types, the theme parks , the theme parks and the sports park . This division results from five typical, constitutive features that allow each amusement park to be assigned to one of the three types

The five constitutive elements that classify and typify an amusement park are:

Amusement parks are legally defined as playgrounds that are also aimed at adults, whose visitors therefore have the virtues of prudence and moderation that are regularly assumed.

An amusement park is usually designed in such a way that it offers a destination for a day trip . Larger parks are increasingly offering overnight accommodation for stays of several days (e.g. Europa-Park ) or offer additional offers such as an attached water park ( e.g. Duinrell ), cinemas or rooms for conferences.

In most parks an entrance fee is charged for entering the site , after which most attractions can usually be used without additional payment. It works differently with the so-called Tivoli principle (named after one of the oldest amusement parks in the world, Tivoli Copenhagen ). Here, like a folk festival, admission is free or quite cheap, but you have to pay separately for the use of the attractions. However, some of these parks also offer tickets that cover the use of the attractions at a flat rate.

If a park is consistently designed in a particular style, it is called a theme park . These theme parks are either divided into several different thematic areas (such as Phantasialand , Europa-Park , Movie Park Germany or Disneyland ) or concentrate on a specific theme area (e.g. marine theme parks such as Sea World or the Tripsdrill adventure park).

Various computer games also deal with the construction and management of an amusement park. The first was Theme Park (1994), the RollerCoaster Tycoon series is also known. In addition to the economic simulation part, you can often design your own roller coasters , but there are usually fewer options than with pure roller coaster construction games such as NoLimits .

Park as a leisure park