In March 1892 a first bill for railways of the lowest order was presented. Since an unification of the federal states in the then German Reich did not come about, Prussia enacted the law on small railways and private connecting railways on July 28, 1892, and the associated implementing provisions followed on August 22, 1892, November 1892 and April 1893. That was true Model for all other German states, but it made every conceivable technical implementation possible, as the law was deliberately not precisely executed.

In close coordination with the Association of German Tram and Small Railroad Administrations, which was founded in 1895 , an attempt was made to categorize it, which came into force in August 1898 and included the small railways

divided. This made numerous sub and mixed variants possible, in which the operators only had to decide whether they were to be regarded as a tram or a railway .

Further implementation regulations, such as the construction and operating regulations for trams with machine operation of September 26, 1906 (with the unrestricted right of way of rail vehicles, which was abolished again in 1938 and then only existed in the GDR from 1977 to 1990) as well as implementation regulations from January 1914 for secondary line-like Based on the Kleinbahngesetz of 1892, small railways were Prussian regulations that were later adopted by other German states, but not everywhere.

A uniform imperial licensing office was only set up after the First World War , but this did not always see itself as a licensing or concession authority: For example, in the case of the Esslingen – Nellingen – Denkendorf tram, the imperial license was denied in 1925. The tram, which went into operation in 1926, was then licensed as a railway of local importance under Article 6 of the Württemberg Railway Act of 1843 . 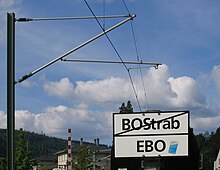 Transition between tram and railway operations in Bad Wildbad

Regardless of ideological influence, the need for standardization had become excessive at the beginning of the 1930s, which was the first step, now under the National Socialist power structure, through the law on the transport of people by land (PBefG) passed on December 4, 1934 , which also happened for trams took the place of state law Reich law. However, according to Section 39 of this, the building and operating regulations to be issued showed the way to summarize these many individual provisions. In the same year a working group began and, after several months of discussion, decided in favor of the first ordinance on the construction and operation of trams (BOStrab). It was published on November 13, 1937 in the RGBl. I p. 1247 and came into force on April 1, 1938. The particular difficulty in creating this set of regulations was to unite the very different tram and tram-like operations. The problems were partly overcome by the fact that the BOStrab was given the character of a framework ordinance in the 1938 edition and was supplemented by implementing provisions.

Until the entry into force, companies were given a short deadline whether they wanted to run their business according to EBO or BOStrab, which then became binding from April 1938. Some companies also solved this question by declaring parts of their operations as operations according to EBO and others according to BOStrab, which explains the system change between the two regulations, which is still permitted and is still in practice today. At the same time, the existing regulations for small railways were replaced; the regulations that had previously existed for them were replaced by the regulation on the construction and operation of small railways and the railways that are regarded as equivalent to them of July 7, 1942 (Reichsgesetzblatt II, No. 24 of July 24, 1942, P. 289) finally canceled: At the latest on this basis, the decision had to be made whether a company ran its business on the basis of BOStrab. The last reassignments took place until 1943.

After the Second World War, an amendment to the BOStrab of August 14, 1953 (Federal Law Gazette S 974) was created as an interim solution in the Federal Republic of Germany. On March 29, 1956, an ordinance for the implementation of the BOStrab was finally published. Finally, on October 16, 1965, a revised BOStrab adapted to the new technical conditions was published. It replaced all previously applicable regulations. This was preceded by an amendment to the PBefG on August 24, 1965, which formed the legal basis for the enactment of the new BOStrab. It was not until 1987 that this set of rules was replaced by the BOStrab, which is still valid today.

In 1959, a new BOStrab came into force in the GDR and completely replaced the 1938 edition. Ten years later there was a new edition of the BOStrab, the next BOStrab appeared in 1976 and had a very extensive system of systems in which almost everything was laid down in detail. Another revision of the BOStrab in the GDR was planned for 1990. In October 1989, the second draft was already available, but it was no longer issued as an ordinance: With the political changes in Germany and reunification, the 1987 edition of the Federal Republic applied to all German tram operators from October 3, 1990.

Road-dependent railways
use the traffic space on public roads and adapt to the nature of road traffic with their structural and operational facilities as well as their mode of operation. This also applies to trains that have a special track body and are similar in operation to the first-mentioned tracks.
Independent railways
are elevated and underground railways , suspension railways or similar railways of a special design that are used exclusively or predominantly to transport people in the local area or neighborhood and are not mountain railways or cable cars . Only independent railways may be operated automatically.

The regulations of the BOStrab apply not only to trams and elevated and underground railways , but also to monorails such as the Wuppertal suspension railway , automatic people movers such as the Dortmund H-Bahn or the SkyLine at Frankfurt Airport.

The BOStrab describes basic planning requirements and regulates everything relating to management, operating staff, operating systems, vehicles and operations. These requirements are fulfilled according to § 2 BOStrab if they meet the regulations of BOStrab and the generally recognized rules of technology. These requirements are specified in the BOStrab guidelines. The main guidelines are the brake, tunnel construction , alignment, clearance, vehicle and lane guidance guidelines . The technical approval and supervisory authority is determined by the respective federal state.

The BOStrab was enacted as Reich law for the first time on November 13, 1937 (Reichsgesetzblatt I, p. 1247–1253) - on the basis of Section 39 of the Law on the Transportation of Persons by Land of December 4, 1934 (Reichsgesetzblatt I, p. 1217) (see also the Passenger Transport Act under Historical Development ) and came into force on April 1, 1938. Up until then there was no nationwide regulation, but different regulations applied in the individual countries. The Reich law regulation has been converted into federal law. The current version came into force on January 1, 1988.

Image 3 of the currently valid BOStrab: light signals with half barrier. The half-barrier may also be striped vertically.

Railroad tracks that are flush with the street are a typical feature of trams. Light rail vehicles usually have special tracks on their above-ground sections. Underground trains are consistently equipped with independent train bodies.

According to the Municipal Transport Financing Act, new lines can only be funded if they contain at least special railway bodies.

There are special signals for driving in accordance with BOStrab, which are described in particular in Section 51 and in Appendix 4. For more information, see main article Tram signals in Germany . 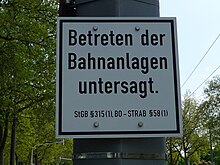 In accordance with Section 58, special and independent tracks may not be entered, except by operating personnel, and may only be crossed at level crossings.

According to § 63 BOStrab, it constitutes an administrative offense for passengers if they improperly operate external doors or emergency brakes or if they enter operating facilities or vehicles without authorization.

Corresponding regulations of other countries

After the " Anschluss " in March 1938 to the German Reich was in the " Country Austria " by the regulation imposing extensive legal provisions on trams in the land of Austria, in connection with the above announcement of the Reich Governor in Austria, which Regulation rich legal to introduce rules Trams in Austria from June 29, 1938 was announced, including the German BOStrab with effect from July 1, 1938 and at the same time replaced the small railway regulations existing in Austria until then with the same wording as in the Altreich. With the ordinance on the construction and operation of small railways and the same railways of July 7, 1942, the rail transport companies in Ostmark had to finally decide on this basis whether they would operate in accordance with the Railway Construction and Operating Regulations (EBO) or wanted to continue after BOStrab.

After the re-establishment of the Republic of Austria , the (German) BOStrab continued to apply until it was still in force with all others from the Nazi era through Section 58, line 32 of the 1957 Railway Act (EisbG; entered into force on March 8, 1957) standing railway laws and ordinances, has been repealed. On the basis of Section 19 (4) as well as Sections 21 and 28 EisbG, the Tram Ordinance 1957, which came into force on November 1, 1957, was passed, which was largely based on deBOStrab. A regulatory loophole between March 8 and November 1, 1957 did not arise because, in accordance with the transitional provisions of Section 59 EisbG according to Paragraph 1, existing railways were protected from the existing ones.

Section 59 (2) of the Eisbg stipulated that it “should only apply to existing railroads under the condition that the safety and order of rail operations and rail traffic is maintained” “as the resulting changes are not disproportionate cause high costs. "However, this was indirectly leveraged by Section 10, Paragraph 1 of the 1957 Tram Ordinance, in that the braking equipment for tram cars, which are approved for speeds of more than 25 km / h, consists of two independent service brakes and a handbrake have to exist. Even old vehicles had to comply with this regulation by January 1st, 1961. That meant z. E.g. for Vienna, that the vast majority of the railcars used in daily operation at that time - a new purchase to the required extent, as well as a retrofitting of the old wagons was neither possible nor technically feasible to a large extent within the period of only three years -, meant that from January 1, 1961, they were only allowed to run at a maximum speed of 25 km / h in the line network: In 1961 this affected around 75% of all Viennese tram lines, whose timetables were stretched to twice the travel times usual until 1960 and also Expanded routes or routes on their own track body were only allowed to be traveled by them at this low speed.

In 2005, the Israeli standard SI 5350 was derived from the English translation of the German BOStrab for the Jerusalem light rail system .