Level crossing with four-way mechanical full barrier to completely block off a two-lane road, here in Pullach in the Isar valley

A regional train passes through the Hamburg-Wandsbek level crossing

Level crossing with half barriers

Chimes at the Fridingen level crossing on the Danube . Behind the bell the mechanical exit signal and the station building
Fridingen bell strike

Level crossings are marked with boards, St. Andrew's crosses and light signals and some are secured with level barriers. Railway barriers are usually lowered and raised by an electric motor. This electric motor is usually located about one meter above the ground directly at the pivot point of the barrier. In the past, and in some places until today (2020), railway barriers are closed and opened by hand with a crank using wire pulls. An example of a barrier that is still operated by wire pulls today is the level crossing at Fridingen station . To ensure that the barrier is closed when a train passes through, the railway employee must use a key from the barrier winch, which can only be removed when the barrier is closed, at the mechanical signal box. This is the only way to set the signal to "drive". The key cannot be removed when a signal is on "drive". The railway barrier can only be opened when the key is in the barrier winch, thus ensuring that all signals are set to "Stop". Passers-by are made aware of the lowering of the railway barrier with a bell.

Railway barriers on the open route used to be operated by a gatekeeper . The gatekeeper often lived right next to the level crossing in a gatekeeper house . 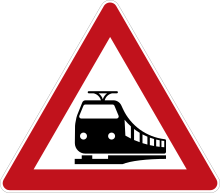 Since 1992 this symbol has replaced the old version in Germany, which depicts a steam locomotive

Level crossings are not permitted in Germany on railway lines with a maximum permitted speed of more than 160 km / h. When building new railway lines, so-called new lines , as well as new roads over an existing railway line, the construction of level crossings is generally no longer approved, even if the maximum permitted speed is only up to 160 km / h. Section 2 of the Railway Crossing Act (EBKrG) regulates more precisely . On the main routes in the Deutsche Bahn network, efforts are being made to keep reducing the number of level crossings. They are canceled without replacement or replaced by overpasses or underpasses . Unlike in many other countries, any warning signs do not pictographically represent a steam locomotive , but a modern electric multiple unit .

In Austria, the crossing of the road with the track is officially called the railway crossing  (EK) . In the road traffic regulations , however, the terms railroad crossing and level crossing are also used when describing the corresponding traffic signs. In contrast, the abbreviation BÜ is not used anywhere.

Signaling at level crossings in Switzerland. 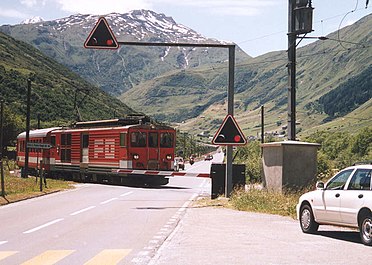 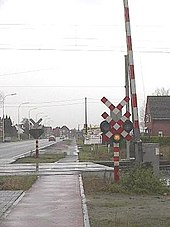 In Belgium , all secured level crossings indicate that they are operational by a constantly flashing white lamp. When a train approaches, it switches off and the red flashing lights flash alternately. If the white lamp does not flash, the level crossing is likely to be defective and must be crossed with the same care as when crossing a level crossing that is not technically secure. The simple St. Andrew's crosses indicate one track, the double St. Andrew's crosses two or more tracks (see picture). The sign “Ban on vehicles of all kinds” (sign 250) is often attached to the barriers.

Danish level crossing with half barrier

In Denmark there are St. Andrew's crosses at the level crossings, which are red and white. Under the St. Andrew's crosses there is a downward-pointing blue triangle with a red and white border (with automatically secured level crossings). In this triangle is the red flashing light system, which starts to flash when a train approaches. At the same time, a doorbell sounds. The bell only rings until the half or full barrier has closed (with 2 parts of the barrier: if 1 part of the barrier has closed), but the flashing light continues to flash even when the barriers are closed. In the case of level crossings with no barrier, the bell continues to ring until the red flashing light goes out.

In France , level crossings that are not technically secured are secured with a St. Andrew's cross and also with a stop sign hanging on the same mast. Multi-track routes are indicated by an extended St. Andrew's cross. The barrier level crossings with flashing lights do not have a St. Andrew's cross. In France, an automatic system always says Signal Automatique under the traffic sign for a restricted level crossing , otherwise it is a crossing operated by a guard . There are still some guard-operated systems in France. The sign “UN TRAIN PEUT EN CACHER UN AUTRE” hangs on multi-track level crossings, which indicates the risk of another train coming on the rear track that was covered by the train on the front track. Whistle boards with the letter S are set up at non-technically secured crossings so that the driver whistles and warns the traffic.

In Finland the warning crosses and barriers are red and yellow. Warning lights are integrated in the barriers of the automatic level crossings.

The technically secured crossings have warning bells over the St. Andrew's cross. If an overhead line runs over the crossing, this is indicated by a yellow additional sign with a lightning symbol. In the unsecured state, a white lamp flashes under the warning cross. When a train approaches, the white lamp and the red flashing lights go out, now mostly alternating flashing lights, flash and the warning bells ring. Sometimes the warning bell stops ringing when the train has reached the level crossing. Level crossings that are not technically secured have at least one warning cross per direction of travel. As in other countries, simple St. Andrew's crosses indicate that the railway line is single-track and double St. Andrew's crosses indicate that it is double-tracked.

In Luxembourg , most level crossings are secured with a flashing light system, which is very similar to the German one. Unlike in Germany, there are no St. Andrew's crosses at railroad crossings with gates. Only half barriers are used. At least one white and red striped mast stands in each direction of travel at barrier level crossings. A black signal screen with a white / red border is attached to it, on which two red flashing lights are installed. These flash alternately if there is a switch-on or a fault. The flashing lights only go out when the barriers are in the upper end position again after the rail vehicle has passed through. There is a special feature at train crossings. If the barriers are switched on again while the half-barriers are opening, the barriers remain in their current position. After a pre-warning time of 7 seconds, the half-barriers then close again without fully opening beforehand. The red flashing lights remain on continuously. Most of the systems are switched on automatically by the rail vehicles using vehicle sensors on the track. They are signal-controlled where there is not a sufficient switch-on distance. Level crossings that are not technically secured as well as technically secured, unrestricted level crossings have a horizontal St. Andrew's cross.

In the Netherlands , the look of the barrier level crossings is similar to that of the USA with alternating flashing lights. In front of each level crossing there is at least one St. Andrew's cross for each direction of travel. As in other countries, simple St. Andrew's crosses indicate that the line is single-track or double, if it has multiple tracks. Half barriers ( automatic halve overwegbomen , or AHOB for short) are common. All types of level crossings usually have red and white hatched warning beacons on both sides, to which a blue warning sign is often attached. On multi-track routes, this sign indicates that you have to wait until the warning light goes out, as a train (from the other direction) can still come.

Unrestricted level crossings with a traffic light system ( automatic knipperlichtinstallatie , AKI for short) have been upgraded to barrier crossings or shut down since 2007. The last of its kind in the area of ​​the largest network operator ProRail was located on Bavinkelsweg in Almelo and was shut down on July 3, 2015.

By the end of 2015, the number of level crossings on routes traveled had decreased to 7,146, and a further 1,110 were on non-traveled routes that have not been closed. Of these, 2,787 are secured on routes that are used and 179 of those that are not used.

In the Czech Republic and Slovakia , the road signals of the technically secured level crossings indicate their operational readiness and basic position by a white flashing lamp. In this case, road users are allowed to drive over the crossing at 50 km / h. When a train approaches, the two upper red lamps flash alternately. As long as the train is in the approaching route in the opposite direction after being switched off, the road signals are dark. Road users may pass the crossing at 30 km / h. The road signals are available as stop light systems or in combination with half or full barriers. In any case, crossed St. Andrew's crosses are attached to level crossings that are not barred. Signs with the red inscription Pozor Vlak ("Achtung Zug") also call for special caution, especially at level crossings without gates, which are still very common in the Czech Republic.

Regarding the signage, the regulation in Israel largely corresponds to the German one as it existed before 1992.

In the USA , every level crossing is secured with at least one “Railroad Crossing” sign per direction of travel. If more than one track has to be crossed at the level crossing, the number of tracks is indicated on an additional sign below the St. Andrew's cross. If a larger street crosses a railway line, half barriers and alternating flashing lights secure the level crossing. Most of these barrier systems have a mechanical or electronic warning bell.

In the United States there used to be so-called “wig wags” instead of today's flashing light systems: on one or both sides of the level crossing there were masts with a warning cross, over which a movable disc with a red lantern hung. When a train approached, the disk with its permanent red light moved back and forth in a rocking motion and a warning bell sounded. Recently there have been warning systems that play the whistle of a locomotive (in the USA usually with polyphonic fanfare) over loudspeakers at the level crossing to inform road users that a train is approaching. This is intended to reduce the noise pollution for those living on the railway line.

The most famous crossing of a railway line with a runway is in Madagascar , with the Manakara – Fianarantsoa railway line crossing the runway of Manakara Airport at the same level. Similar crossings are or were also in Gisborne in New Zealand, Kaunas in Lithuania, Peshawar in Pakistan, Dsyomgi ( Komsomolsk am Amur ) in Russia and Wynyard in Tasmania.

The rotary barrier is a special form, here around 1910 in Timișoara, Romania