Height-free crossing of a road with a railway line

The crossing rights when several traffic routes come together are regulated in individual specialist laws ( FStrG , WaStrG and EKrG ). 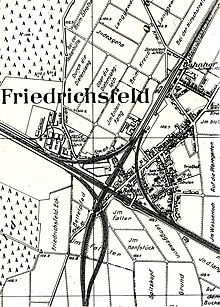 A distinction must be made between level and free crossings, where both traffic routes are led under or on top of each other by an intersection structure and no mutual hindrance can occur. Furthermore, traffic routes of the same type can cross at the same level ( crossroads ) or at no height with a connection ( motorway junction ), which leads to a junction . If different modes of transport intersect , there is usually no transition.

Need for regulation at level crossings

In the case of intersections at the same level, the center of the intersection belongs to all intersecting traffic routes. If several vehicles want to drive through the intersection at the same time, especially with motorized traffic, this can lead to conflicts of interest. For this reason, level crossings are protected by general traffic rules , traffic signs ( pedestrian crossings ) or more complex safety systems ( level crossings ) , if required by the volume of traffic, speed or the type of traffic carrier crossing .

In the case of high-level crossings, the traffic routes are guided by underpasses or overpasses on different levels, without any part of the crossing being used jointly. If two similar modes of transport cross, however, both routes can be connected with each other in order to enable the transition from one to the other ( junction , connecting curve ).

The advantage of the height-free crossing with the help of an intersection structure is that the road users on both routes cannot hinder or endanger each other.

In popular belief, a crossroad is a place where the devil can be found in different manifestations . Devil's pacts concluded at crossroads found their way into popular culture, above all the alleged agreement of blues guitarist Robert Johnson , who is said to have paid for his devil-bought talent with an early death.