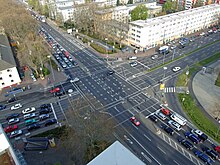 An intersection is a point where two or more streets intersect. Usually it is an even node where the streets are on the same level. In road construction, an intersection is defined as a junction that has at least three junction arms and is formed by two continuously passable roads. In rural areas and less frequented streets, your own direction of lane and the opposite direction are predominantly run next to each other; in urban areas there is often a line of trams in between , which is also used by regular bus services in rush hour traffic and can be equipped with local public transport priority .

Roads with a high volume of traffic have - if structurally possible - one or more turning lanes so that the traffic flows better. Some road crossings are only regulated by traffic signs . Roundabouts replace intersections and generally do not require any traffic lights.

Leveling up of road crossings

The retrofitting of an intersection consists in letting more vehicles pass through in less time without accidents.

With the change of traffic lights (traffic lights), the signal sequence is adapted to the needs or set to inclusion of human intelligence as green arrow for turning right or allowing the left turn at priority oncoming traffic with trailing spaces by Green Arrow . By a storage and supplies detection via sensors or push button for pedestrians ( request traffic light ), the phases of the traffic signal may be changed depending on the traffic situation.

The performance can also be increased through modifications, for example by shortening and dividing pedestrian crossings, which are created by traffic islands such as an exit wedge , or by setting up separate turning lanes . An extension wedge is called a jughandle (teapot handle) in the USA and stands for the shape of the roadway. Indirect juggling is occasionally used for left-turners in the USA . It corresponds to a loop ramp and describes a 270 ° curve. Four Jughandles all Linksabbieger omitted and a height equal cloverleaf created in Toms River, New Jersey at the intersection of Bay Avenue and Hooper Avenue at 39 ° 58 '44 "  N , 74 ° 10' 58"  W . This intersection only switches two directions at the traffic lights. 39.978943 -74.182783

Junctions that are not at the same level are designed in such a way that the traffic - depending on the perspective and needs - is passed over or under ; they therefore do not represent real crossings.

In intersections "may, despite the right of way or green illuminated sign is not [...] be retracted when would. Wait for their" § 11 para. 1 StVO (backwater) or when an emergency vehicle with activated flashing lights and sirens approaching. If the traffic lights fail, rail traffic may have priority over other traffic. Otherwise, the traffic signs apply unless traffic assistants or traffic policemen regulate the traffic.