A traffic junction of the Seagull type , the English word for "seagull", is a three-armed, T-shaped, level traffic junction that connects the traffic direction opposite the junction with a left connection without conflict. It has different names around the world: in Australia and New Zealand Seagull Intersection , generally in the USA Continuous Green T-Intersection (CGT) , in the US states Utah and Nevada High-T Intersection , in Florida Turbo-T . The construction is particularly suitable for motorway-like roads that run in separate directional lanes and are not free of heights. In urban areas, non-motorized traffic is the only exception to conflict-free traffic management on the continuously green driving lane. This is therefore called Continuous Green Through Lane (CGTL) .

Depending on the volume of traffic, the permitted speeds and the clarity of the traffic, the Seagull Intersection does not necessarily require a traffic light. Jammed at locations of traffic lights and on the directions alternately occurring vehicle groups a seagull intersection resolves the conflict that the left-bending in both directions must be free and provides a longer window for tailgating.

In the case of alternating three-armed traffic nodes, so-called offset T intersections , which make a green wave difficult due to the unfavorable distance, the property of the free flowing main direction compared to the lateral direction can be helpful. This saves fuel and emissions.

The connection on the left requires a limited speed in order to enable the approaching vehicles to be threaded. Since the right driving to stop to use the right lane and the main direction not from traffic signal is controlled and is a priority, it requires at least one road marking , which keeps through traffic from the acceleration lane and prohibits the colliding traffic premature lane change. Unfamiliar markings can be overlooked on snowy roads or when visibility is poor. There are some traffic hubs of this type that safely separate the lanes with traffic islands. 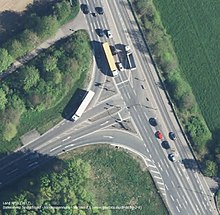 T-shaped traffic junction in Germany with restricted area
(no seagull)

In Austria and Hungary, since the 1980s, restricted areas or similar have increasingly been dispensed with. The area behind the left- turning lane has only been provided with arrows, prompting you to merge to the right in order to announce the following narrowing of the lane to the usual profile. There is often no protective road marking. Some more heavily used traffic hubs are provided with a longer and separating marked lane. The § 7 para. 4 of the Austrian Highway Code (StVO) from 1 October 1994 refers spongy to comparable situations.

Completed in Saskatoon in 2011: 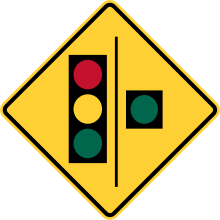