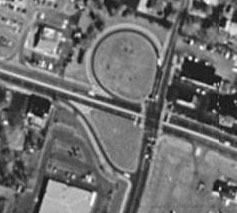 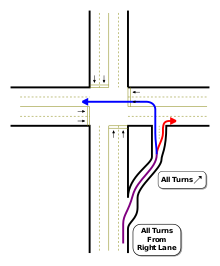 Jughandle of "Type A"

A jughandle (German teapot handle) is a piece of road similar to a connecting ramp , which guides left - turners at traffic junctions at the same level to the right and enables them to indirectly turn left. This can be done in front of or behind the intersection , depending on the type of juggling . Jughandles are one of the unconventional transport hubs and are also known as Jersey left because they were used extensively in the US state of New Jersey .

US states that have few jughandles

In Frankfurt am Main

The main street continues on Franz-Rücker-Allee towards the south. Turning right onto Ginnheimer Landstraße and turning left onto Frauenlobstraße use the Jughandle, which also leads to the entrance to the university sports facilities.

Jughandles were first mentioned in the New York Times on June 14, 1959, when reports were made of jughandles being built on US 46 in Montville, US 22 between North Plainfield and Bound Brook, and on Route 35 at Monmouth Park Racetrack.

At the beginning of 1960, New Jersey had 160 jughandles, most of whom diverted the turning traffic in front of the respective intersection. The 160th was on US Route 1 between New Brunswick and Trenton .

On locally administered streets and in other states, jughandles can be labeled arbitrarily and confusingly for road users who are unfamiliar with the location.

On Pennsylvania State Route 61 , jughandles are generally labeled All Turns ↑ → ( all turns - followed by an up and right arrow).