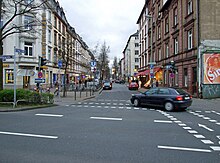 A car is turning

In road traffic, turning is the change in direction to the left or right at intersections and junctions (so-called junctions ). Appropriate right of way and turning regulations must be observed, which are defined in more detail in the road traffic regulations of a country.

Incorrect or careless behavior during or shortly before the turning or turning process often results in serious accidents . In this context, weaker road users such as pedestrians and cyclists are particularly at risk . In the accident investigation, a distinction is made in special cases between the turning accident (accident between turning off and oncoming or longitudinal traffic on the same street) and the accident at turning / intersections (accident between people who have to wait and those with right of way from different streets).

In Germany, Section 9 (1) to (5) of the Road Traffic Act regulates the behavior when turning in detail.

In Austria, Section 13 of the Road Traffic Act regulates the behavior when turning in detail.

In Switzerland, Section 36 (1) to (4) of the Road Traffic Act regulates in detail what to do when turning. The content is as follows:

Turning with the right of way

If you leave a bend in the priority road, the regulations of Section 9 (3) StVO apply in Germany with the exception that you are not allowed to blink if you are driving straight ahead. If you stay on the priority road, you do not turn in the sense of § 9 Paragraph 3 StVO. Nevertheless, one has similar obligations as when turning. The fact that you have to blink when you follow the kinking right of way is now expressly regulated in the German road traffic regulations: In the column “Duties or prohibitions / explanations” (see below) for the directional sign for kinking right of way in Appendix 3 to the Road Traffic Act. This directional sign for the kinking right of way is a possible additional sign to the sign 306 (right of way), i.e. to the square on the top with a white border and a small yellow square inside.

" Requirement or prohibition
1. Anyone who drives a vehicle and wants to follow the course of the bend of the priority road must announce this clearly and in good time; the direction indicators are to be used.
2. Special consideration must be given to pedestrian traffic. If necessary, you have to wait.
Explanation
The additional sign for sign 306 shows the course of the priority road. '" 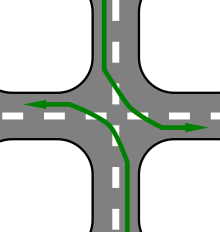 The tangential (also American ) left turn at intersections was introduced by the occupying powers in Germany after the Second World War and was first included in the road traffic regulations in the GDR. In 1992 it was also included in the general German road traffic regulations (for the normal case) as mandatory. Tangential turning means that two opposite vehicles turning left turn in front of each other.

The design of the intersection can make this necessary, for example, when two opposite, confluent streets are laterally strongly offset from one another; if the two directional lanes of a street are too far away from each other due to a very wide structural separation to turn left in front of each other; or if only a very narrow, alley-like opening is available in the structural separation for turning left. In the last two cases, a tangential left turn would give the impression of left-hand traffic. Furthermore, the non-tangential left turn - for clarification, but also in cases in which it would otherwise not be necessary - can be made binding by means of various road markings and structural facilities. This can e.g. B. by appropriate waiting lines, possibly by stop lines (with traffic lights or stop signs in the inner area of ​​the intersection), by guidelines ("broken line") or by lane boundaries ("solid line"), also in combination with lane arrows. Another possibility is to set up traffic islands inside the intersection and use the sign 222 to stipulate the right to pass.

Occasionally, in borderline cases without clear identification, situations will arise again and again in which it is inevitable to communicate with the oncoming left turn about the correct type of turn. However, since 1992 this has only been the case for corresponding borderline cases. Whenever tangential turning is still possible and reasonable in principle, it is also mandatory according to Section 9 (4) StVO. It is not only the design of the intersection that is decisive, but also the current traffic situation. If z. B. in the interior of an intersection, at which in principle tangential left turns have already formed longer vehicle lines in a non-tangential arrangement, then a corresponding classification at the end of these lines i. d. Usually not be reproachable, since the tangential classification in such a situation would lead to the blocking of oncoming traffic.

In accordance with Article 13 "lane and turn" paragraph 4:

“The driver of the vehicle is not allowed to cut the curve when turning left on road branches. Vehicles from opposite directions that both want to turn left at an intersection have to cross each other on the left. ”“ Have to cross left ”means tangential turning.

In Australia, heaped around the city of Melbourne transport hubs with hook turn . Due to the left-hand traffic , there is a non-tangential turn at the left edge of the road in two steps to the right.

In the case of an indirect turn, the bicycle traffic is guided over the road that opens onto the side to a set-up area. You can then cross the street from there. This cycle traffic routing is only possible at light signal-controlled junctions.

Even if there is a correspondingly marked or marked cycle route for indirect turning, direct turning is still allowed for cyclists; for this purpose, cycle paths that are subject to mandatory use may also be left. 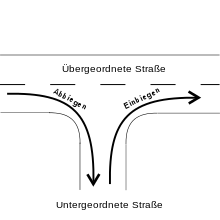 Representation of a right-turn and right-turn process at an intersection.

From the point of view of traffic planning , a distinction must be made between turning and turning . Turning describes the entry of a vehicle into a subordinate street. Turning in is understood to mean stopping and then driving a vehicle into a higher-level street. If two streets of the same street category are involved in the change of travel direction , this is also considered as a turning process. This distinction is important because different parameters must be taken into account when designing a junction ( e.g. the corner fillet and drag curves ).