Scheme of an intersection with Michigan Left . In the arrangement shown, vehicles coming from the north and south have no possibility of turning directly left. You must first turn right and then do a U-turn . 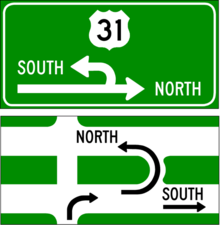 Michigan Left, also called Median U-Turn (MUT), is an unconventional intersection that is particularly common in the US state of Michigan . The peculiarity of this type of intersection is that vehicles are not allowed to turn directly left. Instead, they must turn right and do a U-turn . A separate turning lane is available for this purpose about 400 m after the intersection .

A prerequisite for the construction of such an intersection is a road with separate lanes to leave enough space for the turning lane. The intersection itself is usually regulated with a traffic light.

The design of the intersection in this way should bring two advantages: On the one hand, the traffic throughput should be increased due to the reduced number of traffic light phases, and on the other hand, the increased risk of accidents when turning left is avoided. The traffic light phase saved, including its amber phases and protection time, extends the release time of the main direction.

Reversing lane on the BR-101 in Santa Catarina, Brazil

The Texas U-Turn is a slang term for a connecting ramp for turning like the Michigan Left , which is located between the Dutch ramps immediately before the feeder to a junction . It directs the turning traffic past the intersections of the feeder. When using a DDI or DCD , the Texas U-Turn is obsolete or another lane is required. These turning lanes are most common in Texas . On the existing Frontage Roads there is also the traffic that comes from the secondary directions that have no bridge over the motorway.

A Restricted Crossing U-Turn Intersection (RCUT) is a variant in which the secondary direction is also not directly connected, but left-turners in the main directions turn tangentially directly into the secondary directions. The knot has two conflicting directions. One example is on the West Big Beaver Road Troy (Michigan) at the level of Lakeview Drive at 42 ° 33 '41.1 "  N , 83 ° 10' 52.7"  W . 42.561418 -83.181311

In the US states of Louisiana, New York, North Carolina, Maryland, Missouri, and Utah:

Similar traffic hubs can be found on Rheinstraße in Wiesbaden.