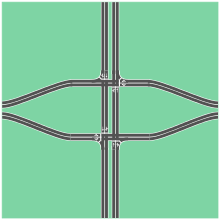 A split intersection is a rarely built traffic junction and the level variant of the motorway junction with parallel ramps, which is also known as "diamond" or "Dutch ramps" with widened ramps. Compared to a conventional four-armed traffic junction or a street intersection , the main traffic direction is divided into one-way lanes, just like with motorway-like roads , only with a distance of between 60 and 100 meters, in order to enable left-turners to enter the secondary direction (crossing street) without conflicting with oncoming traffic. The secondary direction receives a second intersection. The fourth arm of the two intersections is a one-way street leading away in the main direction, which eliminates the fourth conflict, comparable to a T-shaped junction, and improves the flow of traffic in the main direction .

Built transport hubs of this type 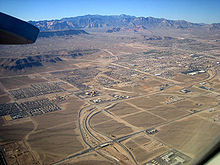 In 2006, temporarily built split intersections on the Interstate-215-Beltway in Las Vegas , which were later converted into interchanges.

The Town Center Intersection (TCI) is very similar to the Split Intersection in that it also divides the secondary direction and thus forms two main directions. This reduces the conflicts of each of the four resulting nodes to two traffic directions.

Their most common use is the grid-like one-way streets in city centers or in a square city .

The partially height-free variants of the TCI are the three-storey diamond, also known as " volleyball ", and the split diamond interchange , which can be roughly referred to as a " split diamond " and has only two floors and one main direction.