Seal of the University of Mannheim with reference to the squares

Quadratestadt is an epithet of the city of Mannheim , whose historic city center is laid out as a planned city in blocks instead of streets. Hardly any of these 144 “squares” is a square in the sense of geometry - rather, it is mostly different quadrilaterals . There are rectangular , rhombic and trapezoidal "squares" as well as two triangles. Occasionally two squares are connected to form a rectangle because there is no road between them. In everyday use, the entire city center is referred to as “the squares”, which means all streets surrounded by the ring roads, including buildings and squares.

This also explains the city administration's modern logo: Mannheim² (for Mannheim in a square ). 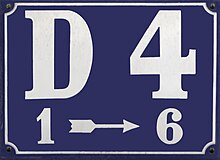 In 1606, Elector Friedrich IV of the Palatinate laid the foundation stone for the construction of the Friedrichsburg Citadel and commissioned the Dutch fortress architect Bartel Janson to plan the neighboring city. The ideals applicable to planned cities were strongly influenced by military aspects. This is how the regular system of geometric shapes, which is characteristic of Mannheim to this day, emerged with parallel streets crossing at right angles and uniform block development.

Until 1684, Mannheim had street names in the city center like any other city. They were each referred to as "Gasz" ("Gasse"), for example "Mauritz Gasz", "Ludwigs Gasz", "Friederichs Gasz". When the unusual numbering was introduced, the inhabitants of Mannheim still stuck to the old street names. This first numbering differed from today's: today's square P 1 was, for example, square XXXI, today's square E 1 was square XXXII. The Friedrichsburg castle, which stretched from the palace to the Mannheim planks , was excluded from this numbering . When this area was incorporated into the city in the 18th century, the numbering changed too.

The division into squares remained in place even after the destruction by the French in 1689 during the War of the Palatinate Succession and the reconstruction. After the remeasurement in the 1730s, the squares were designated with letters for the first time. In 1798 the city was redistributed and the apartment blocks were designated with letters (initially from A to Z; today from A to U) and numbers.

The current system of squares with letters and numbers was introduced in 1811. The previous division was no longer suitable for a city center that extended to the west and east and therefore required numbering that could be scaled to both sides.

The horseshoe-shaped city center of Mannheim lies between the Rhine and Neckar , just under 3.5 km from the mouth of the Neckar . The Mannheim Palace stands in the southwest as a kind of baseline. From here the 1.1 km long “ Breite Straße ”, whose official name is Kurpfalzstraße , runs in the sense of a vertical central axis to the northeast through the city center. About halfway up it is crossed by the 1.4 km long “planks” in the area D 1 / E 1 and O 1 / P 1 (O 1 corresponds to the Paradeplatz). The other streets running parallel to these two main axes divide the city center into rectangular blocks, which are colloquially known as “squares”. Most of the streets in the city center have no name, but the "squares" are named from a combination of letters and numbers. At first glance, one might assume, the city is oriented in a north-south direction, in fact, it is about 32 degrees in a clockwise rotated.

Comparison with a chess board

Even if the comparison with a checkerboard pattern is obvious, the similarities are limited. The Mannheim “chess board” has the shape of an inverted “U” and is divided into a left and a right half. There are also rows that are longer and go beyond the frame of a chess board.

The arches of Kaiserring, Friedrichsring, Luisenring and Parkring together with the straight baseline (Bismarckstraße) form the horseshoe-shaped outline of the city center, the so-called ring , at the base of which the castle is located. The ring was only laid out around the inner city area from 1865 until the turn of the century and was initially known as the "Ringstrasse". The first part of the ring was built in the former trenches from Rheinstrasse to the gasworks at that time (now around K 7). The Parkring in the west was named after the former Friedrichspark at the castle, the Luisenring in the northwest after Luise of Prussia , Grand Duchess of Baden. The Friedrichsring, named after Friedrich I , Grand Duke of Baden, begins at the Kurpfalzkreisel ( Kurpfalzbrücke ) in the northeast . In the east, the Kaiserring runs between the water tower and the main train station as far as Bismarckstrasse. This was completed last, initially through the former tree nursery gardens from the Kaiserring to the castle and was later extended by the former front area of ​​the castle. The ring was laid out generously from the start - the Kaiserring, for example, was planned to be 54 m wide in 1875 - and has been expanded to at least four lanes everywhere. Except on the Parkring, a tram track runs in the middle , on the Luisenring partly underground.

On July 3, 1886, on the Ringstrasse , Carl Benz carried out the first ever test drive of an automobile in his patented motor vehicle .

The most important streets in the city center are the Planken (water tower axis), the Kunststraße and Fressgasse (the two next streets parallel to the Planken) and, perpendicular to this, the Breite Straße ( Kurpfalzbrücke- castle axis). On the one hand, they are the main streets with most shops and, on the other hand, they divide the city center into four large areas, each of which is connected to the suburbs.

The squares with their numbers

With a few exceptions, the streets in the squares themselves have no official street names. This also applies to the aforementioned planks, the Fressgasse and others. Some popular or historical street names are used for orientation, but cannot be found on any street sign. The addresses are only formed by the square names with associated house numbers, for example D 6, 2. Street names were introduced in the squares as early as 1865, but were generally not used.

A special feature applies to the addresses along the ring: The inner sides of the squares are based on the system of squares; on the outside of the ring, on the other hand, the addresses are regularly formed from the respective street name and house number. For example, N 7, 12 is opposite Kaiserring 46.

System of squares and house numbers

“Coordinate system” of the squares

The naming of the 144 squares does not appear comprehensible for non-residents without further knowledge, but is based on a simple scheme.

House numbers in the squares

The house numbers start at the corner of the respective square facing the lock.

From the castle to the planks (left)

The squares between the lock and the plank (left) form as inner-southwest quadrant the municipality Western upper town (A-D).

The A-squares were one of the best addresses in Mannheim - Friedrich Engelhorn , for example , who later founded BASF , lived here.

In addition, parts of the University of Mannheim are located in these squares and with the historical observatory , the Jesuit church and the Palais Bretzenheim, some of the few buildings that remain from the time of the electorate.

Commons : A squares  - collection of images, videos, and audio files

From the planks to the Neckar (left)

The squares between the planks and the Neckar (left) form the north-western inner city quadrant of the city district Westliche Unterstadt (E – K).

The H and I squares, as well as the S and T squares, were in the shadow of the fortress wall that surrounded Mannheim at the time.

In the Latin alphabet , there was no distinction between the sounds I and J for a long time, especially the capital letters were spelled the same in Germany until the 19th century and sometimes even longer. The capital I on the signs is not a J, there are no J (ot) squares. Non-residents are irritated by this spelling, as the following quote shows:

Quoted from: Thomas Baumann: Square skull. A guide to Mannheim and the rest

The squares K and U did not yet exist at the time of the elector, because the walls of the fortress stretched over them. Even after the wall was razed in 1799, it took a long time for the first houses to be built here because the moat had not yet been filled in, which was a health risk on hot days. The first houses were built in the K-squares after 1850, namely in K 1 and K 4. The main part of the development took place between 1881 and 1890.

From the castle to the planks (right)

The squares between the castle and the planks (right) form the south-eastern inner city quadrant of the Ostliche Oberstadt district (L – O), the L squares south of Bismarckstrasse are in the castle area district (L 5–15).

Originally there was only one row of L-squares up to and including L 6 (at that time still called L 5), which until 1893 was partly built over at an angle with the stables of the dragoon barracks. The grand ducal tree nursery gardens followed in the direction of the Kaiserring. In connection with the construction of Bismarckstrasse through the nursery gardens, these were also parceled out after 1880 and the development of the new squares began. Initially they were coveted as a residential area, but after a few years Bismarckstraße was extended along the castle as planned and quickly developed into a busy street.

Between 1722 and 1723, Elector Karl Philipp had the Belderbusch barracks built here, which was named Dragoon Barracks after the transition to Baden. During the period of passive resistance against France, the barracks were a reception camp for deportees, mostly railway workers. At the same time, the Ludwigshafen Railway Directorate was housed here. In the Third Reich, part of the dragoon barracks was rebuilt and used as the headquarters of the SA .

The Art Street lies between the N and O squares. However, this is only an unofficial name. The music and art dealers Sohler, Donnedker, Hasdenteufel and Heckel were located here. Emil Heckel, a friend of Richard Wagner's , had the first Wagner bust in Germany unveiled here in 1887.

The planks , the most important shopping street in the shopping city of Mannheim, run between the O and P squares . The southern parts of the squares O 5 and O 6 form the " Kapuzinerplanken ".

From the planks to the Neckar (right)

The squares between the planks and the Neckar (right) form the northeastern inner city quadrant of the city district of Eastern Lower Town (P – U).

The Mannheimer Planken, Mannheim's main shopping street, run in front of the P-squares.

The street between P and Q has the unofficial name "Fressgasse" and was formerly called Pfälzer Straße.

Commons : U squares  - collection of images, videos, and audio files

Former squares outside the ring

In the second half of the 19th century, streets in the area of ​​today's Jungbusch were also included in the numbering of squares. To the northwest of the city center, the blocks on the Neckar were named as Z-squares. Between the ring road and the newly built connecting canal, the numbers were simply continued beyond the ring. This resulted in C 9 to F 8 and G 8 to G 12. In 1891, the Z squares and the squares from G 9 were included in the system from H to K and H 8 to H 12, J 8 to J 10 and K 8 to K 10. The square names Z 9 and Z 10 were temporarily used in the Lindenhof area near the main train station. At the end of the 19th century the names of squares outside the ring were finally abolished.

Some institutions in Mannheim's city center approach their names onomatopoeically to the square of their location, for example the "Sea Five" spoken restaurant in C 5, the ZEPHYR branch of the Reiss-Engelhorn museums in C 4 or Haar 7 , the barber shop in H 7th

The Manhattan metric is also known as the "Mannheim metric".

A thematic collection of articles about the city can be found on the Mannheim portal .