Friedrich Karl Franz Hecker (born September 28, 1811 in Eichtersheim , Grand Duchy of Baden ; † March 24, 1881 in Summerfield , Illinois , USA ) was a German lawyer , politician and radical democratic revolutionary who was involved in the initial phase of the Baden and German revolutions of 1848 / 49 played a central role until April / May 1848. In Baden he was one of the most popular speakers and agitators of the revolution at this time.

After the defeat of the uprising named after him, he emigrated to the USA. There he fought during the Civil War (1861-1865) as an officer in a German volunteer regiment in the army of the northern states . 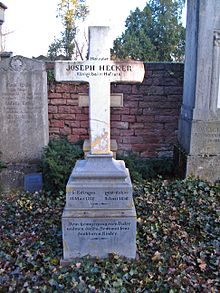 Father's grave in the main cemetery in Mannheim

Hecker was born in the Rentamt . He grew up in an opposition and bourgeois-liberal-minded family and attended elementary school in Eichtersheim. His father Josef Hecker was a Catholic and royal Bavarian councilor and rent bureau for the barons of Venningen ; his mother Wilhelmina was a Protestant and was born in von Lueder. His godfather was Baron Fritz von Venningen. Friedrich had three younger siblings, including the future surgeon and Freiburg university professor Karl Hecker (1812–1878). In Mannheim he went to the Grand Ducal Lyceum from 1820 to 1830, a non-denominational, neo-humanist high school. He was considered an excellent student.

From 1830 to 1834 Hecker studied law at the University of Heidelberg , where he attended lectures by Anton Friedrich Justus Thibaut , Karl Salomo Zachariae and Karl Joseph Mittermaier , and the latter in particular had a fundamental influence on his understanding of law. He was also impressed by the rationalistic-progressive history lectures given by the historian Friedrich Christoph Schlosser . Hecker was also enrolled at the University of Munich for one semester . During his student years he was enthusiastic about the goals of the student progress movement and was involved in the Heidelberg Corps Hassia, Palatia and Rhenania . The membership in the old Heidelberg fraternity from 1831, which is sometimes rumored, is doubtful.

Hecker's student circle in Heidelberg included Heinrich Hoffmann , whose " Struwwelpeter " was given the so-called Hecker collar from 1861 , Albert Sprengel , who later was a member of the Frankfurt National Assembly , as well as the legal historian Karl Eduard Zachariae von Lingenthal and the Shakespeare researcher Karl Gisbert Friedrich von Vincke ; his fellow law student Theodor Hoffmeister (1812–1834) drew the earliest known portrait of Hecker in 1832. In the same year Hecker probably took part in the Hambach Festival . After graduating with the second state examination in law in 1834, he received his doctorate in Heidelberg on June 16, 1834 with summa cum laude as Doctor juris; He completed his two-year legal internship at the Landamt Karlsruhe .

In September 1835, Hecker traveled to Paris , where he attended the lectures of the State Councilor Joseph Marie Degérando , but mainly came into contact with the French practice of public judicial proceedings and attended the proceedings of the National Assembly; He also took part in a Congrès Historique Européen. Hecker returned to Karlsruhe in 1836 and left the civil service immediately after completing his preparatory period. In Mannheim he tried to gain a foothold as a lawyer, but did not get a position as a lawyer and procurator at the Grand Ducal High Court and Court Court of the Lower Rhine District until 1838 .

In 1838 Hecker got to know Gustav von Struve , a colleague at the High Court who would later become one of his most important revolutionary comrades. However, contact between the two initially remained rather low until the mid-1840s. The acquaintance of Adam von Itzstein , with whom he had been a close friend since 1839 , turned out to be far more important for his political career . Hecker was introduced to the Hallgarten circle by him , which endeavored to ensure a coordinated approach by the liberal opposition politicians.

Soon afterwards, the lawyer began his political career with small offices: in 1842 he was elected to the Mannheim municipal council and a member of the exclusive gentlemen's society of the "robber's den". Even then he was considered an excellent speaker and a pleasant character. In the same year, on Itzstein's recommendation, he was also elected to the Second Badische Kammer in Karlsruhe. Hecker did his job as a member of parliament conscientiously.

As a good speaker, Hecker quickly rose to become the spokesman for the left wing of the liberal and democratic opposition , and in this role he became known nationwide. Hecker propagated radical democratic, partly also moderately socialist ideas: the establishment of state-sponsored but freely competing workers' associations, the abolition of the monarchy and the introduction of a parliamentary republic. In 1847 he campaigned for a German republic at the Offenburg assembly . Here, under the impression of rampant famine, he demanded with sharp words the removal of the disproportion between the limitlessness of big capital and the hardship of the fourth estate . 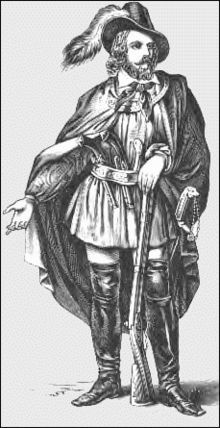 The February revolution in France in 1848 raised political hopes among Hecker and his like-minded people. He took the side of the revolutionary-minded citizens who wanted to submit their petitions to the Karlsruhe state parliament on March 12, 1848.

The Second Offenburg People's Assembly on March 19, 1848 was a success for Hecker. The assembly adopted a revolutionary program and decided to found patriotic associations . Hecker and Struve also took part in the Frankfurt pre-parliament (March 31 to April 3, 1848), but could not prevail. They failed to get elected to the Fifties Committee , nor were their radical views met with enthusiasm. The plan to immediately found a revolutionary executive committee that would take over political power failed in the beginning.

Friedrich Hecker is said to have proclaimed the republic from the balcony of the Konstanz townhouse; however, this is not proven by contemporary sources. The majolica relief by Johannes Grützke is reminiscent of Hecker.

Disappointed by the Frankfurt Democrats, Hecker and Struve undertook an armed revolutionary uprising from Constance on April 13, 1848 , which went down in history as the " Hecker move ". Constance, the capital of the lake district , considered to be liberal , appeared to him to be the ideal starting point for a revolutionary march of rioters against the residence in Karlsruhe. Hecker overestimated the willingness of the population to participate. His platoon of initially 30-50 men grew to around 800 participants within a week, but he was cornered by troops of the German Confederation and defeated in the battle on the Scheideck near Kandern at the foot of the southern Black Forest. The battle of Kandern claimed several lives. General Friedrich Freiherr von Gagern was among the fallen .

Unlike his friend Gustav von Struve, Hecker viewed the German revolution as a failure after the defeat at Kandern. Struve returned to Baden, where he continued to support the revolution. After the defeat, Hecker fled to Muttenz near Basel with Struve and other supporters . In September he traveled to Strasbourg , where the authorities immediately threatened him with deportation. He decided to emigrate to the USA. Thousands are said to have adopted him in Strasbourg. From Le Havre , Hecker and his companions crossed to New York on September 20, 1848 .

In the same year Hecker bought a farm in Summerfield and Lebanon near Belleville , where there was a small settlement of German emigrants. He ran cattle breeding and viticulture and kept this farm throughout his life. Hecker, whose father owned a vineyard, had access to wild-growing vines in the United States that had developed extensive resistance to phylloxera . A lively correspondence arose between Adolph Blankenhorn and Hecker from 1872 to 1880 in order to improve the quality of German wine with phylloxera-resistant vines from America. The import ban on American vines was circumvented by Blankenhorn sourcing different types of grape seeds from Hecker.

Political engagement in the USA

German revolutionary immigrants like Hecker were called " Forty-Eighters " in the USA . Like many of them, Hecker campaigned in the Republican Party of Illinois from 1856 for the abolition of slavery and the election of Abraham Lincoln as president . He was even electoral for the State of Illinois, along with Lincoln.

Hecker fought several times as an officer between 1861 and 1864 in the Civil War . Together with his son he volunteered and recruited a regiment of volunteers from German emigrants himself. Their general was the former Baden officer Franz Sigel , who had been involved in the Hecker train in Konstanz and now also lived in the USA. Hecker became a colonel in the 24th Illinois Volunteer Infantry Regiment in 1861 and commander of the 82nd Illinois Volunteer Infantry Regiment in 1862 . In May 1863 in the Battle of Chancellorsville he was badly wounded in the leg. After the war, Hecker returned to his court in Illinois.

On April 14, 1868 Hecker received by the Humboldt Medical College in St. Louis , the honorary doctorate awarded.

The German agreement of 1871 welcomed Hecker in St. Louis by a known message. However, he condemned the Prussian hegemony and later the Bonapartist police-state methods of Bismarck in the persecution of the Social Democrats through the Socialist Law . In 1873 he paid his only visit to his place of birth and visited his befriended factory owner and politician Carl Mez in Freiburg . However, Hecker did not want to stay in Germany.

Friedrich Hecker died on his farm in Illinois in 1881 at the age of 69. His US Army tombstone in the Summerfield Ward cemetery is labeled “Col. Frederic Hecker 82nd Ill. Inf. ”(Hecker commanded the 82nd Infantry Regiment of the State of Illinois during the Civil War). Around 1000 people are said to have attended his funeral.

Even after his emigration, Hecker remained one of the most important idol figures of the radical German republicans, especially in southwest Germany . " Heckerhut " and " Heckerlied " were widespread. The caricatures and satires of his opponents, such as the mock ballads Das Guckkasten -Lied vom great Hecker ( Karl Gottfried Nadler ) or Der Hecker has come into the Black Forest, did not detract from this.

The revolutionary Hecker is still remembered today, especially in Baden. There is a Friedrich-Hecker-Gymnasium in Radolfzell on Lake Constance and a Friedrich-Hecker-School in Sinsheim . Streets in Heidelberg , Freiburg im Breisgau , Lörrach , Waldshut-Tiengen , Schwetzingen , Rastatt , Karlsruhe-Knielingen and Offenburg are named after Hecker.

The student council of the University of Constance joined long time for the renaming of the university in "Friedrich Hecker University". In Konstanz there is a modern relief of the Heckerzug under the balcony of the citizens' hall (formerly a Franciscan monastery), from which Hecker is said to have proclaimed the republic in 1848 (an event that never took place). The SPD district association Konstanz awards the Heckerhut annually , most recently in January 2014 to the former Minister of Justice Herta Däubler-Gmelin (others under Kalabreser ).

The village of Hecker in Monroe County , which was called Freedom until 1895 , was also named after Hecker . It has not been established whether Hecker ever stayed there.

The German neofolk band Hekate paid tribute to Hecker's achievements on the LP Hambach -1848- dedicated to Robert Blum in the play Hecker's Traum .

The extensive written estate of Hecker ( Friedrich Hecker-Papers ) has been in the Western Historical Manuscript Collection in St. Louis , Missouri , since 1987 as collection S0451 .

Depictions of Hecker's life and the Hecker myth

Literature on the epoch