Friedrich Weech was the son of captain Friedrich Joseph von Weech (1794–1837), who was in royal Greek service, and his wife Augusta, née von Guetmann. He passed the Abitur at the Maximiliansgymnasium in Munich in 1856 , with Wilhelm von Bezold and Hermann von Stengel , among others . He then studied law and history in Munich , Heidelberg and Berlin . In Heidelberg he became a member of the Corps Guestphalia in 1858 . In 1860 he received his doctorate in Munich with the dissertation Emperor Ludwig the Bavarian and King John of Bohemia . In 1865 he married Therese Seuffert (1842–1900), with whom he had three daughters.

He then worked on the publication of the German City Chronicles for the Historical Commission at the Bavarian Academy of Sciences in Munich under the direction of the Erlangen historian Karl Hegel . He took over the historical processing of the report by Erhard Schürstab († 1461) contained in the second volume of the Nuremberg Chronicles about the so-called margravial war from 1449 to 1450.

Von Weech made great contributions to the city of Karlsruhe through his involvement in setting up the city ​​archive . In 1888, three years after its founding, he was appointed to the city archive commission, of which he was a member until shortly before his death. On behalf of the archive commission, von Weech wrote a three-volume city ​​history , the first volume of which appeared in 1895 and which was completed in 1904. In addition, he was an important regional historian . From 1901 he was a corresponding member of the Bavarian Academy of Sciences . 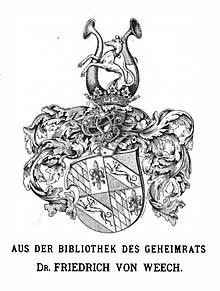 He was awarded the titles of Grand Duke of Baden Chamberlain and Privy Councilor and, in 1872, the Württemberg Order of Olga .

Weechstrasse in the east of Karlsruhe was named after him.