This article deals with the Swabian dynasty of the Zähringers. For further meanings see Zähringer (disambiguation) .

Coat of arms of the Zähringer 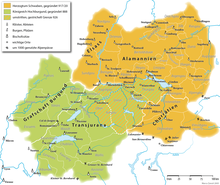 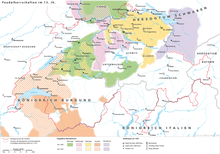 Based on the accumulation of names, it is assumed that the Zähringer came out of the Alaholfingern and based their power on a blood law . This probably set them apart from other Swabian sexes .

Count Berthold I , who held various dominions in the Breisgau , Thurgau , the Ortenau and the Baar , received in 1057 as a replacement for that given to him by Emperor Heinrich III. The Duchy of Swabia promised the Duchy of Carinthia and the Margraviate of Verona , but without actually being able to exercise these rights.

In 1097 the Duchy of Zähringen, consisting of the property of the family and various imperial fiefs, was founded again as a replacement for the Swabian duke title that remained with the Staufers . However, contemporaries did not consider this new territorial duchy to be equivalent to the traditional tribal duchies. From then on, the Zähringer's striving for such an equivalent duchy shaped their policy, but the power struggles between the Staufers and Guelphs set a limit to their expansion. In 1127 the Zähringer received the rectorate over Burgundy . Until the end they tried to develop their Zahringian duchy into a territorial duchy and to make the rectorate over Burgundy appear as a real duchy. After the death of Emperor Heinrich VI. (1197) Duke Berthold V von Zähringen was brought up as a candidate for the throne. However, he ran the candidacy only for a short time; at least the episode shows, however, that the family was considered capable of throne.

The rise of the Zähringers into the circle of the most powerful princes in the empire took place for the most part during the investiture controversy , in which the Zähringers stood most of the time on the side of the papal party. After the loyal rival kings Rudolf von Rheinfelden and Hermann von Salm as well as Rudolf's son had died, from 1090 Berthold II was one of the most powerful princes of this party. Rudolf's son-in-law even came into question as the new anti-king, but no new king's revolt could be staged.

In the 12th century, the Zähringers achieved a significant position of power in what is now southwest Germany and what is now Switzerland , but without actually being able to form a coherent or well-founded duchy in the sense of a unified territory. The silver mining in the Black Forest also made a financial basis for this.

The family's burial site was Weilheim an der Teck until 1093 , where the family's ancestral castle stood with Limburg . According to the shift of the center of the Zähringian possessions to the southwest , the monastery of St. Peter founded by Berthold II in the Black Forest was the last resting place of the Zähringer from 1093 . Berthold V. began the first extension of the Freiburg Minster in 1200 with the aim of creating a new representative burial place. However, the main line of the Zähringer died out before the church was completed with the death of Berthold V in 1218. 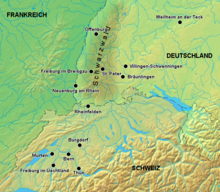 The Zähringer cities in Germany and Switzerland

The Zähringers pursued an active settlement policy in their sphere of influence and founded numerous cities, villages and monasteries. The Zähringer selected the locations according to political and economic aspects. Uniform law, central administration and the greatest possible freedom for the citizens of the cities characterized the Zähringer domain. Another characteristic is the typical urban layout with the so-called Zähringer street cross: two streets that cross each other at almost right angles divide the urban area into four quarters. Usually one axis is made wider than Marktgasse. These cities include, for example, Bern , Burgdorf , Bräunlingen , Freiburg im Breisgau , Freiburg im Üechtland , Haslach im Kinzigtal , Murten , Neuenburg am Rhein , Offenburg , Rheinfelden (Switzerland) , Thun and Villingen .

Berthold V. in the fantasy representation of the Bernese Zähringer monument

The rulers of the Zähringer were:

Other important Zähringer and Zähringer women were:

With the death of Berthold V, the line of the dukes of Zähringen died out. Emperor Friedrich II. Withdrew some imperial fiefs from the Zähringer, the inheritance of the allodial property of Berthold came to the Count of Urach and Count of Kyburg , who were married to the daughters of Berthold IV .

The line of the Margraves of Baden , which goes back to the eldest son of Berthold I, Hermann I , inherited parts of the property and the title of margrave in a dead division . Hermann II , the son of Hermann I, called himself Margrave of Baden for the first time in 1112 . The line ruled - at times in multiple territories - as margraves until the Reichsdeputationshauptschluss 1803, which greatly enlarged the territory of Baden and brought Karl Friedrich the electoral dignity . In 1806 the Electorate of Baden was elevated to the status of the Grand Duchy of Baden , which was ruled by Karl Friedrich's heirs until the death of Ludwig I in 1830 or as a morganatic sideline until Frederick II's abdication in 1918 ( November Revolution ).

From 1805 the House of Baden , based on genealogical studies by the historian Johann Daniel Schöpflin , referred to itself as the Dukes of Zähringen in propagandistic recourse to the High Middle Ages and used the name, among other things, for the Zähringen Order of the Lions and in the 20th century for the Zähringen Foundation .

→ Main articles : Teck (medieval noble family)  and list of the dukes of Teck

Adalbert , brother of Berthold IV., Inherited family estates around Teck Castle and called himself Duke of Teck from 1187 . Berthold von Teck was Bishop of Strasbourg from 1223 . An outsider opinion among historians assumes that Konrad II was elected Roman-German king by one of the parties in 1292 and was therefore murdered before the official election. The dukes of Teck died out with the death of Ludwig von Teck , Patriarch of Aquileja , in 1439; the title was later reused as part of the Württemberger's rank increase.