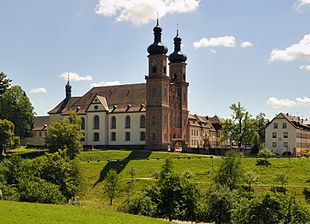 The monastic community in St. Peter was the home monastery and burial place of the Zähringer . The origins of the community lie in Weilheim , in an own monastery or monastery founded in 1073 or before, which after 1078 - forced by warlike events that particularly affected Swabia in the decades of the investiture controversy - to the Hirsau monastery , and in 1085 at the earliest to Duke Berthold II. Of Zähringen (1078–1111). He had a house monastery built there, but changed his plans around 1090 and had the spiritual community relocated to St. Peter in the Black Forest by 1093. Berthold's wife Agnes von Rheinfelden was the founder of the foundations of St. Peter in the form of her inherited Burgundian possessions from Buchsee .

In St. Peter, a Benedictine reform monastery developed in a short time - similar to the St. Georgen monks' community . B. with the privilege of Pope Urban II (1088-1099) of March 10, 1095 of the Roman Church. The outcome of the increasing prosperity of the monastic community, which was endowed with donations from the Zähringer dukes and their ministerials , was the Rotulus Sanpetrinus , a parchment scroll, etc. a. with traditional notes that give a good insight into the developing monastic manorial system. The monastery was guarded by the Zähringer dukes , whereby the legal act of December 27, 1111, in which the Zähringian waiver of inheritance claims to monastery and monastery property was regulated, also helped found the ducal bailiwick over St. Peter. Until 1218 the Zähringian monastery and donor bailiwick remained undisputed, the disputes after the death of the sonless Duke Berthold V (1186–1218) ended with the takeover of the bailiwick by Berthold's nephew, Count Egino the Younger of Urach (Freiburg; 1221/26) who now became advocatus ac defensor of the monastic community. The bailiwick remained with the Freiburg counts , who sometimes had monastic goods and rights at their own discretion (1284, 1314). The oppression by the bailiffs became so great that the monastery turned to Emperor Charles IV (1347–1378) and - perhaps in recourse to any existing relationships with Emperor Friedrich II (1212 / 15–1250) - the umbrella of the Empire (1361). The privilege was confirmed in 1443, in 1498 the Roman-German king and later Emperor Maximilian I (1493–1519) spoke of the monastery belonging to the empire. In the meantime, the bailiwick had finally reached Margrave Wilhelm von Hachberg-Sausenberg (1428–1441) (1441) on the way of pledging (from 1371 ). In 1526 the Habsburgs took over the monastery bailiwick.

In the 11th and 12th centuries, the community of monks in St. Peter - not least thanks to donations from the founding family - acquired important properties in the vicinity, in the Breisgau , on the Baar , near Weilheim, in central Switzerland . The monastery and monastery location were on the Seelgut ( Salland ) in the immediate immunity area of ​​the monastery, while a compact monastery area was formed in the surrounding valleys. Im Breisgau there was Villikationen , fronhofmäßig organized owned, in the Black Forest existed on clearing land farming hereditary fief (feoda), and by dividing and selling a pronounced land fragmentation occurred (13-14. Century). As a result of the population loss in the 14th century, there was desertification and a decline in manorial income. The Dingrodel from 1416 and 1456 name the resulting difficulties between the monastery and the Vogt. They also show the type of goods: dinghouses and Meierhöfe, self-managed goods of the Seelgut, rural fiefs.

In 1238 and 1437 the St. Peter monastery fell victim to fire disasters, in 1436 the abbot Johannes Tüffer (1427–1439) was awarded the pontificals . The monastery lost its importance in the late Middle Ages , the monastery reforms of the 15th century were not implemented, but the property was largely preserved, even in the age of the Reformation . Abbot Peter Gremmelsbach (1496–1512) renewed the Zähringer tradition and donor memorial, the monastery buildings were rebuilt in baroque style in the 17th and 18th centuries. In addition, in 1507, when he bought a house, he laid the foundation stone for the Peterhof , which later became the Freiburg branch of the Abbots of St. Peter.

At the time of Abbot Gremmelsbach, the later Anabaptist martyr Michael Sattler was appointed prior of the St. Peter monastery. In this role he led negotiations with the rebellious peasants . In 1523 he left the monastery, married the beguin Margaretha and in the spring of 1525 turned to the Anabaptist movement. Sattler became known as the initiator and author of the Schleitheim article , an early Anabaptist creed. On May 21, 1527 he was executed at the stake in Rottenburg am Neckar because of his convictions.

From 1842 to 2006 the former monastery housed the pastoral seminary of the seminary for the newly created Archdiocese of Freiburg . In 2006 it was merged with the Konvikt in Freiburg, which is now called the Archbishop's Seminary Collegium Borromaeum as a full seminar . Since November 19, 2006 the monastery has been used as a "spiritual center". 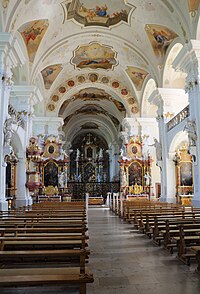 The Baroque monastery church , which is preserved today, with a facade made of red sandstone and flanked by two onion domes , was built in the 1720s under the building of Abbot Ulrich Bürgi . The architect was Peter Thumb , the rich baroque furnishings come from, among others, Franz Joseph Spiegler (55 frescos from 1727) and Joseph Anton Feuchtmayer (sculptures).

Today the former monastery church is the parish church of the Catholic parish of St. Peter in the Upper Black Forest.

A special feature of the baroque church is the high altar from 1727, the main picture of which is laid out above the altar table as a changing picture. There are eight different images that are changed in the course of the year to match the individual sections of the church year . In the past, this was done by hand, but today the pictures are on rollers in a sliding device. The matching picture is pushed into the golden baroque version of the altar from behind and locked in place. The eight motifs of the pictures are:

The main organ on the gallery above the entrance area was built in 1966/67 as Opus 1349 by the organ building company Klais from Bonn as a replacement for a Walcker organ from 1880 in the existing baroque organ front, probably still created by Johann Georg Fischer . It has three manuals and a pedal unit with a total of 46 stops . The organ was renovated in 2014. She has the following disposition :

Due to technical defects, a 2013 report recommended that the organs be renovated. In the course of this, it was decided to rebuild the choir organ, as the organ was so badly damaged, among other things by the appearance of mold, that renovation would have been disproportionately expensive. The instrument was placed on the south side of the choir in order to get better climatic conditions for the instrument and to avoid mold damage. It has 20 stops on two manual works (including a swell ) and a pedal. On the north side one makes mock of symmetry . On July 26th, 2015 the choir organ was consecrated and put into operation with a concert. The disposition is:

The library room of the monastery was also built by Peter Thumb. The library building was built up to the vaults under Abbot Ulrich Bürgi. Its construction stalled after his death under the successor Abbot Benedikt II. Wülberz for eleven years, because the French army occupied the Breisgau with 70,000 men on April 28 and 29, 1744 and besieged the city of Freiburg . There were also - admittedly only a few - farmers who strictly refused to do the necessary labor to continue building. But since they owed it legally, an amicable settlement was ultimately reached. After the war, Abbot Philipp Jakob Steyrer immediately started the expansion as it is today. The monastery had to make contributions of 14,000 guilders to the enemy in this war and to feed the poor and students. Every day during these years up to 600 people came to the monastery gate. The subjects (farmers) donated 6,000 guilders.

The artists involved in furnishing the library were the plasterer Johann Georg Gigl , the painters Benedikt Gambs and Franz Ludwig Herrmann as well as Johann Christian Wentzinger and the sculptor Matthias Faller . The collection catalog from 1774 lists around 13,000 titles in around 14,000 volumes. By the time of secularization, the collection had grown to around 20,000 books. Most of the books went to the Badische Hofbibliothek , some of them to the University Library of Freiburg , some remained on site for use by the St. Peter seminary, founded in 1842.

Up until 2008, it was assumed that the old leather-bound books that still adorned the library were merely "antiquarian yard goods" that served as a backdrop when, when moving out of the seminary, it was noticed that there were still 1000 books out on the shelves the original holdings , including a copy of the German Koberger Bible from 1483 and a Basel first edition of Thomas More's “ Utopia ” . The incunabula from the 15th century comprised 120 volumes. There were also a number of manuscripts, the best known of which is probably the Markusblatt, which is related to the Egbert Codex, from the end of the 10th century. These books are now kept in the monastery treasury.

Before secularization, St. Peter blossomed once again as a spiritual center under the Abbot Ignatius Speckle , who was in close contact with scholars of his time, including the Abbot of St. Blasien Martin Gerbert ; here the Benedictines worked as teachers at the University of Freiburg. Became known Thaddeus Rinderle with his inventions, less known were others, such as St. Basil Meggle .

When the monastery was dissolved in 1806, around 20,000 volumes from the library went to the Grand Duchy of Baden . In addition to a small collection that remained in St. Peter, these came to new owners, such as the Karlsruhe Court Library, the Freiburg University Library and various private individuals or were lost. Since 2009, the Freiburg University Library, the Badische Landesbibliothek and the Landesarchiv Baden-Württemberg together with the General State Archive Karlsruhe have been trying to unite the holdings again. After the holdings have been reconstructed, digitized and integrated into a library database, parts of them can be viewed online in the St. Peter's Virtual Library .

Abbots of the monastery

Prelate bank of the Breisgau estates around 1800