The Sacro Convento in Assisi 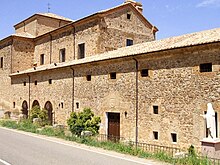 The convention of conceptionists in Ágreda , Spain , founded by the venerable servant of God María von Ágreda .

A convent ( m. , From Latin conventus , 'assembly') is a branch of a religious order consisting of female or male religious ( nuns , monks , friars or sisters ). Both the totality of the members of such a community and the buildings in which the community lives can be called a convent .

The term came into use when the hermitic way of life was combined with the coenobite way of life in church history . The hermits of the Eastern Church Lauren , who lived in individual cell houses or caves around the church and the cell of their superior, were called Conventus . The term was in common use early in the Western Church .

In a narrower sense, convention refers to the assembly of the conventuals , the voting members of the community. All members of a monastery community who have made solemn profession are entitled to vote . In monastic orders, conversations and lay sisters did not belong to the convent; however, the Second Vatican Council abolished this distinction in favor of a “fraternal bond among the members” and “a single class of sisters”.

In the case of communities of religious sisters whose way of life is not tied to a specific monastery, one speaks of settlement.