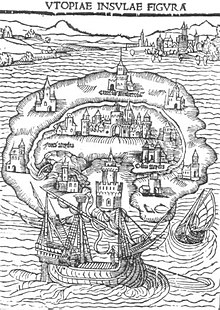 Utopia [IPA: uˈtʰoːpi̯ɑ], stressed on the 2nd syllable, ( full Latin title: De optimo rei publicae statu deque nova insula Utopia - "From the best state of the state and the new island of Utopia") is a 1516 by the London citizen and Vicedomus Thomas More's philosophical dialogue published in Latin and published in Leuven (Belgium) . The description of a distant “ ideal ” society gave rise to the genre of social utopia .

The first publication took place at the instigation of the famous humanist Erasmus of Rotterdam in 1516 in Leuven , edited with the help of the Magister Petrus Gegidius of Antwerp (1486-1533) and printed by the Löwener university printer Theod. Martin von Aelst; further prints followed in 1517 in Paris and in 1518 in Basel. The first German translation - called Von der wunderbarlichen Innsul Utopia, the other book - appeared in 1524. However, only the second part was translated.

The framework is the story of a sailor who claims to have lived with the Utopians for a while . The novel describes a society based on rational principles of equality, hard work and the pursuit of education with basic democratic features. In the republic all property is common, lawyers are unknown, and inevitable wars are preferred with foreign mercenaries.

The book was so formative that from now on every novel that portrays an invented, positive society is called a utopia or a utopian novel . Important utopias after Utopia were La città del Sole (City of the Sun) by Tommaso Campanella , New Atlantis by Francis Bacon , A Modern Utopia by HG Wells , Ecotopia by Ernest Callenbach and Island by Aldous Huxley .

The genre of the utopian novel is now often viewed as a field of science fiction .

The life of the utopians

The first part of the work has a framework story in which Thomas More criticized the political and social conditions of that time in Europe, especially England. For example, he strongly denounced the practice of the death penalty, which even thieves threatened in England, so that for them there was no difference between stealing and murder. In the second part he describes the organization of the future state of Utopia and the living conditions of its inhabitants.

The utopians live in cities and form family groups. Adults enter into a monogamous marriage. There is a general patriarchal hierarchy and the elders rule over the younger ones. The community is organized like a monastery, with communal kitchens and meals. An annually elected head ("Phylarch") has the supervision of a family association of 30 families. Private property does not exist, everyone is given free of charge those goods produced by the community for personal use that he desires. Men and women work as craftsmen six hours a day. In which craft a citizen is trained, he can decide for himself. There is a duty to work , and the utopians are regularly sent to the countryside, where they jointly farm. Schooling is compulsory for children. Particularly gifted people receive a scientific or artistic education. The scientific lectures are open to the public, attending them is the utopians' favorite leisure activity. The citizens attach particular importance to optimal health care for every patient. Men and women regularly exercise for military service. War criminals and offenders, some of whom were bought as death row inmates from abroad, have to do forced labor. In the secularly organized community there is religious tolerance.

The state is a republic . Each city is governed by a senate made up of temporary electoral officials. The respective mayor is elected for life; if it develops tyrannical traits, it can be removed.

The utopians do not know monetary transactions. But they are supposed to accumulate much of it through an overproduction of goods and use it to maintain mercenary armies or to trade. The utopians themselves do not value gold.

Cities are only allowed to reach a certain size. Overpopulation is offset by migration or the formation of a colony abroad. Conversely, if there is a shortage of inhabitants, there is a backflow from the colonies or overpopulated cities.

The plea of ​​the fictional reporter about Utopia for the abolition of private property had the most lasting effect:

“Meanwhile… it seems to me - to put it frankly, what I think - in fact that wherever there is private property, where everyone measures everything by the value of money, it will hardly ever be possible, just or successful To engage in politics, unless one would be of the opinion that it is fair wherever the best goes to the worst, or happy where everything is distributed to very few and even these are not well off in every respect, the rest but very bad ...
If I think about that, as I said, I am doing better justice to Plato and I am less surprised that he has spurned even giving laws to such people who reject the equal distribution of all goods. "

Thomas More created a "new thesis"; but in doing so he relies on Plato ( Politeia , Nomoi ), Cicero and other scholars before him. According to recent research, More's work is said to be a satirical representation , the aim of which was to demean the Platonic concept of justice . It is argued that More z. For example, with regard to the idea of ​​common property, several counter-arguments of Aristotle used without countering adequate replies.

There is no doubt that the work has satirical moments and contains some ironic breaks in the idea of ​​utopia. In the preface, More begins an ironic game with the question of whether utopia really exists or is just a fiction. The name "Utopia" also has its origin in the word play in front of the text with the Greek names "Outopia" (Οὐτοπεία) and "Eutopia" (Εὐτοπεία) (translated as "non-place" and "happy place"), which are homophones in English . The ironic break is continued by the author appearing by name in his novel and playing the skeptical dialogue partner of the reporter about Utopia. This reporter also bears the strange name Raphael Hythlodeus , which means something like "buffoon" in German. And while the title in Latin heralds “the best state” ( De optimo statu rei publicae deque nova insula Utopia ), As the named protagonist of his own work, More admits that some utopia is certainly desirable, but he believes that utopia will be realized (in Europe) did not believe and actually only out of courtesy did not contradict certain points of Hythlodeus' laudatory description. In this way, More cleverly keeps all directions of argument in suspense dialogically and enables the critical reader to form his own judgment.

More established a literary tradition of working out fictional statist state models . Rational legislation and static, principle-based organization of the community were elevated to guarantors of happiness. The main concern of pre-industrial society was distributive justice for an optimal supply of the citizens with scarce goods and the preservation of internal and external peace. Although the Renaissance is considered the age of the discovery of the individual , egoism in its forms of sinfulness and instinctual immorality was described as the antipode of the sense of community and thus as a disruptive element of the just balance between living conditions and community interests. On the other hand, in the 18th century, with the first bursts of innovation through science and technology of the Age of Enlightenment, the free development of the personality and a general idea of ​​the freedom of the individual came to the fore as a basic requirement for a self-determined life, and the focus was directed towards a dynamic future .

German The first translation (but only of the second book) into German appeared in 1524.