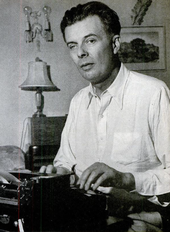 Aldous Huxley became famous primarily through novels and numerous essays . But he also published short stories , poems , travelogues and wrote scripts . In his novels, Huxley examined and criticized social mores, ideals and norms and the possible abuse of scientific achievements by humans. The works of his earlier creative phase can be considered more humanistically motivated. Later he turned mainly to spiritual subjects such as parapsychology and mystical philosophy . 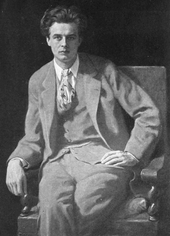 Huxley was born in Great Britain as the son of the writer Leonard Huxley and his first wife Julia Frances Arnold. On the paternal side , several scientists belong to his ancestors, including his grandfather Thomas Henry Huxley . The writer and cultural critic Matthew Arnold , a great-uncle of Huxley, belongs to the British intellectual family Arnold on the maternal side . The biologist and writer Julian Huxley was the brother of Aldous Huxley, the biologist and Nobel Prize winner Andrew Fielding Huxley was a half-brother.

As a child, Huxley was at the Hillside School in Malvern ( Worcestershire taught), for several years, even by his own mother, until she became seriously ill. He then attended Eton College in Berkshire . His mother died in 1908 when he was fourteen years old. In 1911 he fell ill with the eye and was almost blind for three years. From October 1913 he studied literature at Balliol College , Oxford . When he was in his early 21s, he made writing his profession. His first book The Burning Wheel was published in 1916 when he was 22 years old.

In January 1916, he volunteered for World War I service , but was not accepted because he was still half-blind in one eye (later his eyesight improved). In the same year he worked as editor of the literary magazine Oxford Poetry and graduated with top marks in June. In 1917 he worked for a few months for the Royal Air Force , where he was responsible for ordering material. He taught French for a year at Eton College , where his students included Eric Blair (better known as George Orwell ) and Steven Runciman . As a teacher, he was unable to keep class tidy, but he was admired for his brilliant language skills.

During the war, Huxley had spent much time at Garsington Manor , the home of Lady Ottoline Morrell . In 1919 he married the Belgian Maria Nys, whom he had met there. The next year his son Matthew was born. Huxley now worked as a journalist and art critic . In his novel Crome Yellow (1921) he caricatured the lifestyle of Garsington, but this did not affect his friendship with the Morrells. In the 1920s he stayed in Italy with his wife and young son and visited his friend DH Lawrence there .

His novels tell of a dehumanization of society through scientific progress, especially the dystopian Brave New World from 1932 (German: Brave New World ). At the same time he also wrote on pacifist topics, for example in the novel Blinded in Gaza (1936).

In 1937 Huxley moved to California . Here began his second creative phase, which was characterized by a new turn to people. The dedicated critic, satirist and sharp-tongued realist met Jiddu Krishnamurti in 1938 . Under the influence of Buddhist teachings, he turned to various wisdom doctrines, in particular mysticism and a religious universalism . This new orientation is reflected in the novel After Many a Summer (1939) and even more clearly in Time must have a stop (1944). In the theoretical paper The Perennial Philosophy (1946) Huxley set out his philosophical point of view.

In 1953 he got involved in an experiment supervised by Humphry Osmond , which dealt with the effect of mescaline on the human psyche . In the following correspondence with the author, both coined the word psychedelic for the effect of this substance. The essays The Doors of Perception and Heaven and Hell describe this effect and the experiment, which he underwent about ten times before his death.

In 1960 Huxley was diagnosed with cancer of the larynx . After that, his health deteriorated. He lectured on " Human Potentialities" at the Medical Center of the University of California in San Francisco and at the Esalen Institute in Big Sur . These lectures are related to the rise of the Human Potential Movement in California. In 1962, Huxley's last novel Island (German Eiland ) was published, a positive utopia in which Huxley also incorporated his experiences with drugs. In the same year he was elected a member of the British Royal Society of Literature . Since 1960 he has been an honorary member of the American Academy of Arts and Letters .

Aldous Huxley died on the afternoon of November 22, 1963 at the age of 69. Shortly before his death, he had his wife Laura give him two 100 micrograms of LSD at his request . At noon on the same day the assassination attempt on John F. Kennedy took place, of which Huxley, who died a few hours later, did not find out more. The coverage of this event, as well as the news of the death of CS Lewis , who also died on November 22, 1963, overshadowed the news of Huxley's death. In December 1963 a memorial service was held in London, led by Huxley's older brother Julian . The ashes of the deceased were buried in the family grave. This is in the cemetery in Compton, a village near Guildford in Surrey.

Igor Stravinsky dedicated his last composition for orchestra to his friend Aldous Huxley: the Variations , composed between July 1963 and October 1964, premiered by the Chicago Symphony Orchestra in Chicago on April 17, 1965.

Huxley was strongly influenced by Frederick Matthias Alexander , whom he even included as a fictional character in Blinded in Gaza .

Huxley was friends with the biologist JBS Haldane and parodied him and his father John Scott Haldane through characters in his works. In addition, J.B.S. Haldane's work on Daedalus on the development of fetuses in artificial wombs influenced Huxley's novel Brave New World . 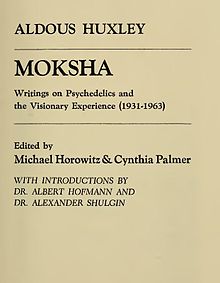 Members of the Huxley family