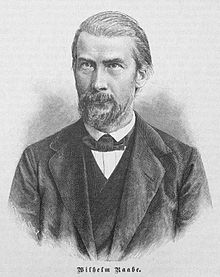 Wilhelm Karl Raabe ( pseudonym : Jakob Corvinus ; born September 8, 1831 in Eschershausen ; † November 15, 1910 in Braunschweig ) was a German writer ( narrator ). He was a representative of poetic realism , known for his socially critical stories , short stories and novels . Raabe lived for several years in Wolfenbüttel (six of them as a writer), eight years in Stuttgart and almost 40 years in Braunschweig.

Wilhelm Raabe was born as the son of the judicial officer Gustav Karl Maximilian Raabe (1800–1845) and his wife Auguste Johanne Frederike Jeep (1807–1874) in the small town of Eschershausen in the Weser Uplands. He spent childhood and school in Holzminden and Stadtoldendorf . After the death of her father, the widow moved with Wilhelm and his two siblings to Wolfenbüttel , where their relatives belonged to the upper class .

After dropping out of school and an apprenticeship as a bookseller in Magdeburg , which was also broken off in 1853 , Raabe tried in vain in Wolfenbüttel to catch up on his Abitur . In Berlin he studied philology as a guest student at the Friedrich-Wilhelms-Universität, today's Humboldt-Universität , which, as a citizen's son, was possible even without a high school diploma. During this time he wrote his first novel Die Chronik der Sperlingsgasse , which he published under the pseudonym "Jacob Corvinus" ( corvinus is Latin for "raven-like") and which, according to him, was his greatest literary success - and, according to tradition, also his greatest economic success Success.

In the almost fifty years between November 15, 1854, the "spring date" when he began to write Die Chronik der Sperlingsgasse (published at the end of September 1856, predated to 1857), and the novel Altershausen , which was broken off as a fragment in 1902, Raabe did not write fewer than 68 novels, short stories and short stories, plus a small number of poems. Since Raabe lived exclusively from his income as a freelance writer , he was forced to this high productivity. The spectrum of his work ranges from great, realistic novels and masterful short stories to everyday entertainment literature . No other of his books achieved the popularity of his first work, but they too found a large readership.

In the 1890s, some of Raabe's works received more attention. During this upswing, he was also publicly honored several times, although he already considered himself a "deceased writer" ("former writer"). He conducted an extensive correspondence with the literary critic Sigmund Schott , who also discussed many of Raabe's works in the press. In the last eight years of his life he stopped his writing and went on several trips.

Raabe died on the day of his author's jubilee, 56 years after the "spring appointment day". The memorial speech at the funeral was given by the writer Wilhelm Brandes , a friend and confidante of Raabe and his biographer, who in 1911 founded the Society of Friends of Wilhelm Raabe together with several Brunswick dignitaries .

Wilhelm Raabe's own picture of life

Wilhelm Raabe declined the request for an autobiography , but in 1906 he wrote a small biographical sketch :

“I was born on September 8, 1831 in Eschershausen in the Duchy of Braunschweig . My father was the 'actuary' at the local court at the time, Gustav Karl Maximilian Raabe, and my mother Auguste Johanne Frederike Jeep, the daughter of the former city treasurer Jeep zu Holzminden . It was my mother who taught me to read from the Robinson Crusoe of our old compatriot from Deensen , Joachim Heinrich Campe . Whatever science I acquired afterwards at elementary and middle schools, grammar schools and at the university, everything is attached to the dear, delicate finger that pointed to me around the year 1836 the point above the i.

In 1845 my father died as a judicial officer in Stadtoldendorf and his widow and her three children moved to Wolfenbüttel, where I attended grammar school until 1849. How afterwards our Lord's office, the brave city of Magdeburg, saved me from becoming a mediocre lawyer, schoolmaster, doctor or even pastor, I consider a providence for which I cannot be grateful enough.

At Easter 1854, after a year of serious preparation, I went to Berlin to bring myself a little more order in the world of things and affairs 'at universities', as far as such a young person can overlook them. In November of the same year I began to write the 'Chronicle of Sperlingsgasse' there in the Spreegasse and completed it the following spring. At the end of September 1856, the book saw the light of day when it was printed and, besides the 'hunger pastor' in the earthly household, still helps me to live most of all. Because I have found 'readers' for the writings of my first creative period, which extends up to the last-mentioned book, for the rest only 'lovers', but with them, I believe, of course the most distinguished audience that the German people currently has to offer . "

Raabe observed the irreparable cracks between old and new, between security and technical industrialization , which grew and deepened at the expense of nature and the culture of the mind. One of the first environmental novels is his work Pfister's mill , in which he attributes the decline of an idyllic restaurant to the water pollution from a nearby sugar beet factory. Ultimately, the bar had to give way to a new factory. So Raabe saw the dark side of progress, of existence in general, and assumed the attitude of a pessimist . For this situation he recommended: Look up to the stars. Be careful of the alley. ( The people from the forest ) . Raabe's humor is also rooted in this basic trait. Raabe was not a person of idyll , although he was often read or interpreted in this way, but rather remained a staunch critic of his time.

Raabe deals with parts of German history in his complete works , especially the wars. He succeeds in making his works lively and exciting by introducing real characters and their fates. He maintains an observing distance through artifice of narrative perspective and style .

Many considerations and digressions - including the abundance of quotations from antiquity to contemporary vernacular, which was still inconspicuous at the time - make reading Raabe's works difficult today. To a cursory reading it sometimes seems as if his texts had an inadequate structure and occasionally were missing important connections, but these were precisely what he worked out with great care and delicacy. The evaluations of Raabe's poems have shifted since his lifetime. He himself judged very harshly about some of his early works, some of which he called "youth quark". While the so-called "Stuttgart Trilogy" ( Der Hungerpastor , Abu Telfan , Der Schüdderump ) used to be the main work, today preference is given to other stories and novels (including Stopfkuchen , Horacker , Das Odfeld , Hastenbeck , Die Akten des Vogelsangs ).

Wilhelm Raabe had another, less well-known talent, that of painting. He left behind more than 550 watercolors and drawings, most of which are now in the possession of the city of Braunschweig and are kept by the city archive there; Some sheets and sketches remain in the private ownership of the descendants. The landscape painting Bauernkaten in a heathland is an oil painting in the dimensions 37 × 23 cm.

Wilhelm Raabe's birthplace is now a museum, the Raabe House in Eschershausen .

The Raabe house in Braunschweig is the building in which Raabe lived with his family from 1901 until his death in 1910. There is an exhibition and a Raabe research center here. 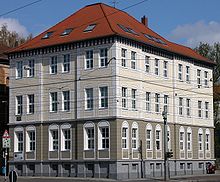 The Raabe House in Braunschweig 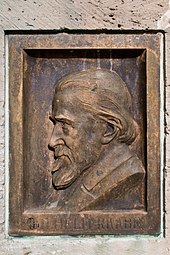 Sorted alphabetically according to the surname of the authors and (subordinate criterion) year of publication: