Origin of the dominion

Heinrich the Lion from the House of Welfs was the founder of Braunschweig's claim to rule . He had received the city ​​of Braunschweig and the Duchy of Saxony as a fief in 1142 and greatly enlarged the latter in the following years as part of intensive colonization in the east . He chose the city of Braunschweig as the center of his domain, which he had converted into his royal seat . After Heinrich the Lion was appointed Duke of Bavaria in 1154, he was considered one of the most powerful princes in the Holy Roman Empire . As the conflict between Henry and the Emperor Barbarossa came to a head more and more, eventually became 1180 imperial ban imposed on Henry. Following the imperial military expedition against Heinrich the Lion that followed , Heinrich only had the cities of Braunschweig and Lüneburg as well as some smaller inherited property ( allodial property ).

It was not until Henry the Lion's grandson, Otto the Child , that the lost influence was partially restored. In the course of the reconciliation between Staufer and Guelph, it transferred its owners to Emperor Friedrich II in 1235. In return, the Duchy of Braunschweig-Lüneburg was founded from the transferred goods and other large imperial areas and Otto was enfeoffed with it.

All these principalities were smashed by the Napoleonic campaigns against Prussia and the subsequent peace of Tilsit . By decree, Napoléon Bonaparte founded the Kingdom of Westphalia , to which the various Brunswick and Hanoverian possessions were subordinated. Only after the defeat of Napoleonic France was this division reversed at the Congress of Vienna. On June 8, 1815, the German Confederation was founded as the successor organization to the Holy Roman Empire . Member states included the Kingdom of Hanover and the Duchy of Braunschweig.

In 1813 Duke Friedrich Wilhelm was restituted. After the Congress of Vienna, the Duchy of Braunschweig was established in 1814 within the old boundaries of the Principality of Braunschweig-Wolfenbüttel. During the congress there were still efforts on the part of Brunswick to incorporate parts of the former duchy of Hildesheim into Brunswick territory. The Wolfenbüttel dukes ruled over these areas as early as the 16th and 17th centuries, and such an increase could have ended the territorial fragmentation of the state. But the interests of Prussia and, above all, Hanover opposed this. The entire Hildesheim area eventually became part of the Kingdom of Hanover .

After the death of Friedrich Wilhelm, he was followed in 1815 by eleven-year-old Karl II as Duke of Braunschweig. Until Charles came of age in 1823, however, his uncle, George IV of Great Britain and Hanover , exercised the regency. In 1830, after a bad harvest, there was unemployment , hunger and great dissatisfaction in the state of Braunschweig . Charles II had long since turned the population against him with his clumsy style of government and his absolutist behavior, which, under the impression of the July Revolution in France, led to a popular uprising: The above-mentioned "Gray Court" was stormed in 1830 by petty bourgeoisie , craftsmen and workers and cremated, Charles II was left only to flee to Switzerland - in his luggage works of art of inestimable value. In Braunschweig law and order could only by that of councilor Meanwhile Wilhelm Bode founded vigilantes be maintained. Duke Charles II was declared incapable of government in absentia .

The reign was transferred to his younger brother Wilhelm (initially the last member of the Welfish line). On October 12, 1832, the New Landscape Order was enacted, a hereditary monarchist representative state constitution with a chamber and a fixed budget of the ruling prince of 230,900 thalers. Under this unmarried ruler, Braunschweig experienced a phase of neutrality as a small state that was not allied with either Austria or Prussia . The state formed the tax association with Hanover as a customs union in 1834 , but joined the German customs union as early as 1841 . When the empire was founded in 1871, the duchy became a federal state of the German Empire.

Reign of Prince Albrecht of Prussia

→ Main article : Regency over the Duchy of Braunschweig

After the death of Wilhelm (1884), who did not leave a legitimate heir, the chairman of the Regency Council, Hermann Graf von Görtz-Wrisberg , took over the affairs of government until, after a Federal Council decision on November 2, 1885, at the end of Prussia's efforts, there was no Welfe from the House of Hanover ( Ernst August, Duke of Cumberland had actually been chosen for this), but Prince Albrecht of Prussia was appointed as regent. 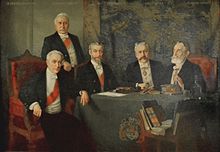 After Albrecht's death in 1906, the President of the Regency Council, Albert von Otto , took over government again. On June 5, 1907, Duke Johann Albrecht zu Mecklenburg was granted the Brunswick regency after a corresponding Federal Council resolution. The reign ended when the last Brunswick duke couple, Ernst August and his wife Viktoria Luise , moved into the city on November 1, 1913 .

In the meantime - triggered by the wedding on May 24, 1913 between Viktoria Luise , the daughter of Kaiser Wilhelm II , and Prince Ernst August von Hanover - a reconciliation between Welfen and Hohenzollern had come about . On November 1, 1913, Duke Ernst August, a Guelph, once again ascended the throne of Brunswick. Ernst August abdicated in 1918 at the end of the First World War in the November Revolution , which ended the Duchy of Braunschweig. First of all, a " socialist republic " emerged. On January 6, 1922, Braunschweig received a new democratic constitution as the Free State of Braunschweig .

It consisted of several, non-contiguous parts: the area between Aller and Harz with Braunschweig, the area between Harz and Weser with Holzminden, Blankenburg am Harz with its surroundings, the Calvörde office (surrounded by the province of Saxony), the Thedinghausen office between Bremen and Verden, the patch Bodenburg with the village of Oestrum (Gandersheim office), the village of Ostharingen (Lutter am Barenberge) north of Goslar and the village of Ölsburg south of Peine , which belongs to the Vechelde office .

After a provisional division into 2 city courts (Braunschweig and Wolfenbüttel) and 19 district courts had been decreed on March 1, 1814, which were under the jurisdiction of 6 chief officers (Wolfenbüttel, Schöningen, Harz, Leine, Weser and Blankenburg), it took place in 1823 a judicial and administrative reform, which did not come into force until October 1, 1825. The duchy was redistributed into 6 more evenly tailored districts, each with a district court, and at the level of the previous city and district courts in 4 city courts (including 3 for Braunschweig and 1 for Wolfenbüttel) as well as 22 district offices and 1 district court (Thedinghausen). In 1827 the district office of Calvörde was added, which was separated from the district office of Vorsfelde.

Map with all linked pages of the districts and offices of the Duchy of Braunschweig: OSM | WikiMap

All six district directors together formed a regional directorate, in whose deliberations the boards of the magistrates of Braunschweig and Wolfenbüttel took part. The two cities thus occupied a special position. The Braunschweig Provincial Directorate was given the task of managing the “Secretariat, registry and office business of the Provincial Directorate”; Last but not least, it also had the task of recording all files from the predecessor authorities that could not be clearly assigned and thus looking after the state archive.

With the Courts Constitution Act of August 21, 1849 and its implementation on July 1, 1850, administration and justice in the duchy were consistently separated. The offices lost in importance in the period that followed.

The regents of the Duchy of Braunschweig: