Schöningen seen from the south, in the background the Buschhaus power plant and the open-cast mine

Merian engraving by Schöningen around 1654

Schöningen is a town in the Helmstedt district on the Elm ridge . It is located about eleven kilometers southwest of the Lower Saxony district town of Helmstedt on the border with Saxony-Anhalt .

Schöningen is divided into three districts:

Continuous settlement can be demonstrated for the town of Schöningen, which gained special importance because of its salt deposits, since the birth of Christ. It was the royal court in Carolingian times, was first mentioned in a document together with Ohrum in 747 as "Scahaningi" and is therefore the oldest place in the former Duchy of Braunschweig . The Schöningen saltworks already existed here back then . Both Pippin the Younger and Charlemagne entered Schöningen on their campaigns. In 994 and 995, King Otto III also held. , whose chancellor Archbishop Willigis von Mainz is said to have been born in Schöningen, several times at court here. Several noble families had their seat on the Elmrand and in the 13th century the German Knight Order was given the Elmsburg , located in the Elm near Schöningen . The noblemen of Warberg were imperial and subordinate only to the king. When the sex became impoverished in feuds, they gave up their possessions to the Guelphs as fiefs . As early as 1347, the Guelphs had built a strong fortification with Schöningen Castle to protect their eastern border.

From 1949 to 1989 Schöningen was on the edge of the zone , right on the inner-German border . The pedestrian zone was opened in 1976 . In 1989 Der Spiegel reported on an NSA listening station . On November 19, 1989, in the course of the fall of the Berlin Wall, the border was opened and the road to the neighboring town of Hötensleben with the bridge over the Schöninger Aue was opened.

On April 1, 1971, a large part of the area was incorporated into the dissolved municipality of Alversdorf . On March 1, 1974, Esbeck and Hoiersdorf were added. 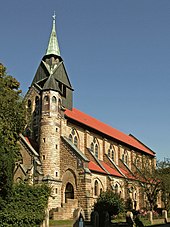 The Catholic Church Maria Hilfe der Christians , also known colloquially as St. Marien for short , is located on Anna-Sophien-Straße. The church, built in 1907/08 by Maximilian Jagielski , is today one of the oldest churches in the Wolfsburg-Helmstedt deanery . Today the parish also includes the Catholic churches in Jerxheim and Neu Büddenstedt .

There is a New Apostolic Church on Danziger Strasse. From 1908 on, the parish was formed and today it belongs to the Braunschweig church district. In the 1960s the first church was built on Kampweg, in the 1980s today's church.

The Jehovah's Witnesses are also represented in Schöningen.

The City Council of Schöningen has 30 council members. The distribution of seats since the last local election on September 11, 2016 is as follows:

In the runoff election for the office of mayor of the city of Schöningen on February 26, 2012, the non-party candidate Henry Bäsecke prevailed against Knut Gödecke with 78.5 percent of the votes cast. Henry Bäsecke was the full-time mayor from March 1, 2012 to February 29, 2020 and thus successor to Matthias Wunderling-Weilbier, who has moved to the office of the district administrator of the Helmstedt district. With the election of November 10, 2019, Malte Schneider (non-party) prevailed with 66.13 percent against his competitor Markus Sobotta (non-party). Schneider took office as Mayor of the City of Schöningen on March 1, 2020. Henry Bäsecke did not run again for reasons of age.

The city of Schöningen has twinned cities with Beni Hassen in Tunisia (since 1955), with Solotschiw in Ukraine (since 1996), with Outokumpu in Finland (since 2000) and with Oschersleben (Bode) in Saxony-Anhalt (since 1990).

The Schöningen municipal museum, reopened in autumn 1981, is housed in the Renaissance building of the old Anna-Sophianeum Latin school (Markt 33), which was built in 1593 . It gives a good overview of the development of this space since prehistory.

The presumed birthplace of the Archbishop of Mainz Willigis (* approx. 940; † 1011) was in the Salzstrasse in the city center. The Mainz city arms are said to go back to him. A memorial plaque on the house standing there today, the oldest surviving Schöningen from 1568, indicates this event.

In 2004 a rope-making museum was set up in the gate house of Schöningen Castle . This museum referred to a tradition of over 200 years in Schöningen. There you could see exhibits and rope making tools from earlier times. The rope making museum is now closed.

For a tourism campaign and to better represent oneself, the slogan "Schön, Schöner, Schöningen" was used for a long time. In Schöningen and its surroundings, such as B. Esbeck, a variant of Low German was still spoken by many older residents , but it can now hardly be heard, which is also due to the extensive immigration after the Second World War. 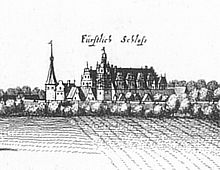 Schöningen Castle on a Merian engraving from 1654

The castle construction goes back to the Guelph Duke Magnus , who had a hunting castle built here around 1350 . It also served as a border fortress to the areas of the bishops of Halberstadt and Magdeburg. The facility was damaged when the Schmalkaldic League went into a religious war against Duke Heinrich the Younger . The castle was later converted into a residential building and served three Brunswick duchesses, Sophia Jagiellonica (Sophie Jagiello), Elisabeth of Denmark and Anna Sophia of Brandenburg , as a widow's seat between 1568 and 1659 . Anna's sister Katharina von Brandenburg lived and died here around 1644 . The palace complex was one of the most magnificent buildings near the Elm . It was often used by the Guelph Dukes with their residence in Wolfenbüttel and their entourage as accommodation for driven hunts in the Elm. During a hunt, they are said to have moved into the Elm with 3000 drivers. On January 25, 1681 Elisabeth Eleanor of Braunschweig-Wolfenbüttel married Duke Bernhard I of Saxe-Meiningen here . In 1733, the Prussian Crown Prince Friedrich  - who later became King Friedrich the Great - stayed here on his journey to his wedding with Elisabeth Christine von Braunschweig-Wolfenbüttel-Bevern in Salzdahlum Castle . 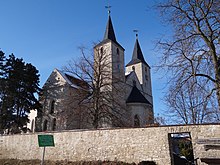 The Church of St. Lawrence comes from a 1120 by Bishop Reinhard of Halberstadt as Augustinian canons -Stift founded monastery forth. In the first half of the 15th century the main nave was completely destroyed. A makeshift addition was made in the late Gothic style, in which the two Romanesque east towers received their Gothic tops. The church building has been used by the Evangelical Lutheran community in Schöningen since the secularization of 1648. The building history of the church is not fully known. Archaeological investigations were carried out from 1992 with interruptions until 2003. Foundations were found between Romanesque walls that are of older date. A Carolingian Palatinate, which existed in the 8th century, has long been suspected as an outpost against the Slavs in the east.

The museum, located not far from the site of the Schöninger Speere , which was opened as a palaeon in 2013 , is dedicated to interdisciplinary research into the Schöningen sites and the Pleistocene archeology in the former open-cast lignite mine. It presents the original finds in an experience-oriented exhibition. The transparent research and laboratory area as well as an interactive visitor laboratory are intended to link the research and museum areas. Landscape biotopes , including a pasture with wild horses , illustrate typical plant communities of the warm period on the 34- hectare outdoor area . The place is recognized as an extracurricular place of learning .

On July 1, 2019, the palaeon became the responsibility of the Lower Saxony State Office for Monument Preservation after losses in the millions .

The 1907 fire station across from the castle has been converted into a coffee roasting facility with a café since 2019. On November 8, 2014, the fire brigade ceremoniously moved into new premises. The old fire brigade had to be abandoned due to lack of space.

In Schöningen there are several sports clubs that mainly practice popular sports. The best-known clubs are the FC Schöningen 08 , whose first soccer team played in the highest amateur league in Lower Saxony for 13 years, and the Turnclub Schöningen (TC), which is one of the largest local sports clubs. The internationally known formation "Imagination" started successfully for the TC in 2005 in the 1st Bundesliga Jazz and Modern Dance in the German Dance Sports Association and has been internationally successful since 2008.

In addition to the larger Elmstadion, several halls can be used. There is also a swimming pool, the Negenborn bathing center . In the north of the city there is a golf course at the St. Lorenz Monastery .

The MTV Schöningen from 1861 is at 153 years the oldest and largest gymnastics club in the city and one of the oldest sports clubs in the former Duchy of Braunschweig . As a popular sports club with 1036 members (as of June 2014), it offers 26 sports and leisure activities. In addition to the well-known classic sports such as athletics, tennis, gymnastics, gymnastics, dancing, handball, judo, ju-jutsu , cycling and volleyball, there are also health and recreational sports offers . The MTV Schöningen is a sports club certified by the German Gymnastics Federation with the quality index "Pluspunkt Gesundheit" and a recognized sports club for rehabilitation sports. He also offers health and fitness programs. The club has an approximately 1.5 hectare sports facility with four tennis courts, running tracks, long jump facilities, a hard court and a beach volleyball facility, as well as a 150 m² practice room.

The popular special-interest print magazine "Neon Zombie - The magazine for fantastic cinema and cinematic pop culture!" Has been published in Schöningen since 2013 and distributed worldwide. The local reporting is taken over by the Braunschweiger Zeitung as well as the Helmstedter Sonntag . The latter is an advertisement-funded weekly newspaper.

In 1998, the Helmstedt waste recycling plant was put into operation in the urban area .

Until 1973 Schöningen had its own local court. Since July 1, 1973, it has belonged to the jurisdiction of the Helmstedt District Court .

A youth hostel of the German Youth Hostel Association is located west of the city, on the edge of the Elm. The street leading to it is named after Richard Schirrmann , the founder of the German Youth Hostel Association. The first youth hostel was built in Schöningen as early as 1935, and today's hostel was built next to it in 1975. Its official opening was on September 28, 1975. The Elmstübchen restaurant was located in the building of the first hostel for some time .

→ Main article : List of personalities from the city of Schöningen

Municipalities in the district of Helmstedt

Districts of the city of Schöningen