The title of this article is ambiguous. For the son of the same name, see Matthäus Merian the Younger . 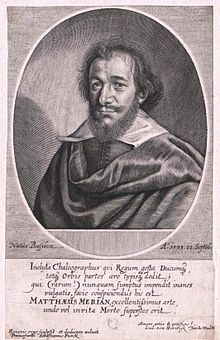 Matthäus Merian the Elder (born September 22, 1593 in Basel ; † June 19, 1650 in Langenschwalbach ) was a Swiss - German engraver and publisher from the noble Merian family in Basel . He published numerous maps , cityscapes and chronicles. His main work is the Topographia Germaniae . 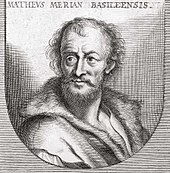 Matthäus Merian was born the son of Sägmüller and councilor Walther Merian . After attending grammar school, he learned drawing, engraving and etching from the Zurich copper engraver Friedrich Meyer . From 1610 to 1615 he studied and worked in Strasbourg (with Friedrich Brentel ), Nancy and Paris (with Jacques Callot ). His large Basel city map was created in Basel in 1615 .

After traveling through Augsburg , Stuttgart and the Netherlands , Merian came to Frankfurt am Main and Oppenheim in 1616 , where he worked for the publisher and engraver Johann Theodor de Bry ; de Bry owned a copper engraving shop in Oppenheim and a publishing house in Frankfurt, in which large travel books on the Far Eastern countries were prepared at that time. In 1617 Merian married Maria Magdalena de Bry, the daughter of his employer. During this time he also worked for the engraver and publisher Eberhard Kieser . In 1620 he moved back to his native Basel, where he acquired guild rights and started his own business. After the death of his father-in-law (1623) he continued his publishing house in Frankfurt and in 1626 acquired Frankfurt citizenship. In 1627 he took Wenceslaus Hollar into his workshop as a student.

After the death of his wife (1645), Merian married Johanna Sibylla Heim in 1646. From his first marriage come three daughters (Susanna Barbara, Margaretha and Maria Magdalena) and three sons: the two also work in his workshop, Matthäus Merian the Younger , Caspar Merian and Joachim. The daughter Maria Sibylla Merian , the natural scientist and artist, emerged from the second marriage .

Matthäus Merian died after a long illness on June 19, 1650 in Langenschwalbach near Wiesbaden. He was buried in the Peterskirchhof in Frankfurt. After his death, his sons Matthäus and Caspar took over the publishing house and continued to publish his works under the name Merian Erben .

Less well-known than his publishing activities is that Matthäus Merian dealt intensively with religious issues and drew strength from them. For him, it was primarily about the individual's being moved by the Spirit of God, less about the Church, the Bible and the sacraments. In 1637 he wrote following a Bible verse ( 1 Cor 2.14  LUT ):

"The natural man does not understand the spirit of God, it is a folly and great kezerey to him, and although he was the greatest doctor, and taught in all the schools of the world and could all the books of the Bible by heart, so help and serve nothing for bliss unless the Holy Spirit himself teaches inwardly in the soul. "

In this sense, Merian designed his coat of arms and publisher's signet , in which he included the motto Pietas contenta lucratur (for example: "Piety pays off") with a stork as heraldic animal.

Frankfurt from the southwest

Title page of the Theatrum Europaeum

Session of the Reichstag in Regensburg in 1640

Of his artistic works, the following are to be mentioned above all:

In 1967, it was possible to locate the point in Heidelberg from which Merian sketched his famous grand engraving of the city of the Palatinate Elector, the so-called Merian pulpit .

Wörth Castle and Market on the Danube , colored copper engraving