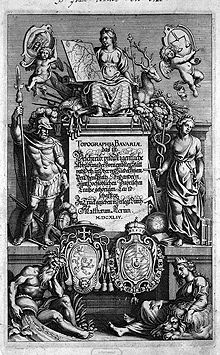 Title page of the Topographia Bavariae , the partial volume on Bavaria

The Topographia Germaniae is one of the main works of the engraver and publisher Matthäus Merian the Elder. He created the Topographia together with Martin Zeiller (1589–1661) from Ulm , who was responsible for the texts.

The work shows in great detail more than 2,000 views of remarkable cities, monasteries and castles of the Holy Roman Empire ; to this day it is considered to be one of the most important works of geographical illustration.

In 1642, Matthäus Merian began to publish the large-scale complete works of a comprehensive topography with city representations under the title Topographia Germaniae . In it - after the successes of his contemporary history Theatrum Europaeum (1635) and his description of the world Archontologia cosmica (1638) - he wanted to systematically summarize and supplement the templates and drawings of cityscapes, landscapes and maps that he had been collecting for three decades. He was encouraged to undertake this major publishing task by the good sales success of the Thesaurus philopoliticus ( political treasure chest ) published by Daniel Meisner and Eberhard Kieser in Frankfurt am Main from 1623 , on which he had worked temporarily as a draftsman and engraver.

His Topographia Germaniae was published by Merians Verlag in Frankfurt am Main from 1642 to 1654, initially in 16 volumes, which were followed by more until 1688 with descriptions of other European regions such as France , Italy and Crete . The complete work finally contained 92 maps and 1486 copperplate engravings with 2142 individual views in 30 volumes; it was thus one of the largest publishing works of the time. After Merian's death in 1650, his sons Matthäus Merian the Younger (Matthäus the Younger ) and Caspar Merian continued the work.

The most famous volumes

The best-known volumes of the complete works (in chronological order) have the following Latin titles (followed by the years of the various editions):

The Latin title was followed in each volume by an explanation of the title in German, which, for example, for the 2nd edition of the 3rd volume read: This is a full-grain description and unique illustration of the most distinguished cities and towns, in Upper and Lower Alsace, including the neighboring ones Sundgow, Brisgow, Graffschaft Mümpelgart, and other areas .

It is known of Matthäus Merian that he arranged the 16 volumes in chronological order, but not numbered them. Only his heirs made a count in the main register of 1672, but this was arbitrary and did not correspond to the order of appearance. The above numbering takes into account the results of more recent research (cf. literature ) on which the facsimile editions of the Bärenreiter Verlag are based.

A few years after publication, the first edition of each volume of Topographia received a supplementary volume called an “appendix”, which then had to be incorporated into the renewed second edition. All volumes saw at least two revised and supplemented editions, with the exception of volumes 8 and 12, all volumes were even more editions.

The individual volumes of the Topographia begin with a preface by the publisher, followed by a geographical and historical description of the country. This is followed by a list of the copperplate engravings contained in the volume (with a page reference) and an alphabetical register of the “towns, towns, spots, villages, monasteries, castles, valleys, mountains, forests, waters, etc.” in this augmented Topographia Alsatiae to be found ” (taken from the 2nd edition of the 3rd volume). The main components of each volume are the cityscapes, each with a brief description of the city depicted and its history.

At that time, Matthäus Merian succeeded in engaging the well-known travel writer and geographer Martin Zeiller from Ulm (1589–1661) for the explanatory texts . He is also the author of the “first German Baedeker” travel diary Itinerarium Germaniae novantiquae (1632) and the Itinerarium Italiae novantiquae (1640) with engravings by Matthäus Merian. For the texts for the Topographia Zeiller relied on his own works as well as on the Sponheim Chronicle of Johannes Trithemius (1462–1516), the Cosmographia by Sebastian Münster (1489–1552) and on local sources.

The cityscapes in the Topographia often document the state of the cities before the destruction of the Thirty Years War; They are therefore still of great cultural and art historical value today. Merian himself has repeatedly stated that his pictures often represent the state of construction “of previous bliss and glory”, which, however, no longer existed at the time; they are therefore also suitable as models for reconstruction.

The copper engravings in the first nine volumes of the Topographia (1642–1648) are largely based on drawings and templates by Matthäus Merian. In addition, he employed well-known topographers, draftsmen and engravers in his Frankfurt office, including his two sons Matthäus the Younger and Caspar Merian as well as his student Wenzel Hollar (* 1607, Prague, † 1677, London). He also received templates from Wilhelm Dilich (around 1572–1650 Dresden) and other artists. In total, the names of more than fifty artists who participated in the Topographia are known.

For Lower Saxony , for example, Conrad Buno is known as a draftsman.

From the publication of the first volume of the Topographia (1642), all volumes were prepared for printing and published in Matthäus Merian's own publishing house in Frankfurt am Main; the printing work was partly outsourced to Frankfurt printing works, u. a. to the book printers of Wolfgang Hoffmann and Johann Georg Spörlin.

In addition to the numerous issues of the Topographia by the Merian publishing house, there were u. a. the Dutch pirated prints of the so-called Swiss volume from 1644 as well as non-publisher late prints using the original plates; Finally, there are also the early, unillustrated Ulmer prints with texts by Martin Zeiller.