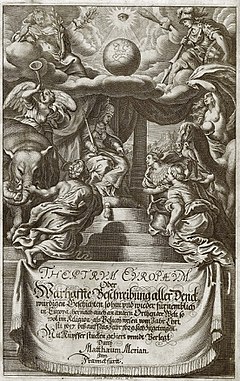 Title copper of the Theatrum Europaeum , attributed to Matthäus Merian .

Theatrum Europaeum is the title of a German-language historical work founded by Matthäus Merian and published in 21 quart volumes between 1633 and 1738 . The series of chronicles is of particular importance because of their contemporary descriptions of the Thirty Years' War and the reign of Louis XIV, as well as their 720 copper plates, of which around 140 were engraved by Merian himself. The volume of the volumes is between 400 and 1500 pages.

In 1633, the engraver and publisher Matthäus Merian published a work with the title Historischer Chroniken Continuation or Warhaffte Description of all ... memorable stories that happened every now and then from 1629 to 1633 . With the word continuation (Eng. "Continuation") the work explicitly linked to the world chronicle by Johann Ludwig Gottfried (around 1584–1633), which was published by the same publisher since 1629. Merian engaged the Alsatian teacher Johann Philipp Abele (mostly: Abelin ) as the author , who had already written the last volume of the world chronicle after Gottfried's death. The gap that emerged between the end of Gottfried's Chronicle and the continuation was closed in 1635 with another volume, which for the first time bore the later title of the Theatrum Europaeum series .

Two years later, Merian had the first volume reworked by Johann Flitner (1618–1678) and justified this with the lack of diligence and the "partishness" of Abele. The renowned Merian expert Lucas Heinrich Wüthrich remarks that one gets the “impression that he was resented by his clearly expressed political position against the imperial and for the Swedes after Gustav Adolf's death and especially after the defeat at Nördlingen, which had serious consequences for the Protestants in 1634 Merian Heinrich Oraeus won the third and fourth volume and the doctor Johann Peter Lotichius (1598–1669) as authors for the fifth volume . The five volumes published up to Merian's death in 1650 were printed in a total of eleven editions, which indicates that the company was extremely successful economically.

After Merian's death, his descendants continued the work. Johann Georg Schleder was hired as the author , who initially concluded the series with the sixth volume under the title Theatri Europaei Sixth and Last Part . After an interruption of eleven years, the series was continued - apparently due to the still existing demand - with a seventh volume, also written by Schleder. Martin Meyer and Wolfgang Jacob Geiger followed Schleder as authors, the latter only writing the second part of the tenth volume. No author can be proven for volumes eleven to fifteen. Daniel Schneider is attested as the author of volumes sixteen to twenty-one. The last volume was published after the bankruptcy of the Merian publishing house in 1734 by an unknown Frankfurt publisher in 1738; thereafter the publication was discontinued.