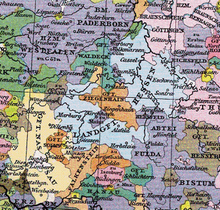 Landgraviate of Hesse around 1400 (light blue)

The name Hessen goes back to the Germanic tribe of the Chatten (pronounced [ ˈxatən ] with ch as in ach ), who settled around the turn of the times in the area of ​​the Fulda and Eder rivers and between the upper reaches of the Lahn and Werra . Etymologically , the term developed in the course of the second sound shift from Latin Chatti via Hatti, Hazzi, Hassi (around 700) to Hessi (738). Hesse and Frisians are the only Germanic tribes that have retained both their name and their settlement area to the present day, although no direct descendants of Chatti and today's Hesse can be proven.

After the supremacy of the Conradines in Hesse until 918, a number of counts' territorial lords emerged on the basis of official counties. Among them, those of Count Werner in the Franconian Hessengau ( County of Maden ), the Gisonen on the upper and central Lahn, the Count of Ziegenhain , the Count of Waldeck , and the Bilsteiner on the central Werra achieved outstanding importance in northern and central Hesse . By inheritance and marriage, these counties, with the exception of those of Ziegenhain and Waldeck, fell under the rule of the Ludowinger Counts of Thuringia between 1122 and 1247 , who were raised to Landgraves of Thuringia in 1131 . During this period the Hessian areas were mostly ruled directly by younger brothers of the Landgraves (as Counts of Gudensberg or Counts in / of Hesse), but without actually having any independence. Well-known counts of Gudensberg-Hessen from the house of the Ludowingers were Heinrich Raspe I. , Heinrich Raspe II. , Heinrich Raspe III. and Konrad Raspe , who later became Grand Master of the Teutonic Order .

After the Ludowingers died out, the Landgrave's daughter Sophie , married Duchess of Brabant , won the Hessian property of the Ludowingers for her son Heinrich I of Hesse ("Heinrich the Child") in the Thuringian-Hessian War of Succession (1247–1264) , thus securing them again Independence of Hesse from the Thuringian legacy of the Ludowingers, which fell to the Saxon Wettins . Heinrich was proclaimed Landgrave of Hesse on the Mader Heide in 1247 . On May 12, 1292 Henry carried the city Eschwege King Adolf to feud and, she received along with the castle Boyneburg back from this as a hereditary fiefdom. This made the Hessian landgraves imperial princes. Heinrich moved his residence from Marburg and Gudensberg to Kassel in 1277 and founded the Hessian Princely House .

Under Landgrave Philip I , the Landgraviate of Hesse became Protestant in 1526 as a result of the Homberg Synod . Alongside Saxony and Württemberg, Hesse was one of the powerful champions of the Reformation in the German Empire .

The Hessian landgraves repeatedly divided their territory within the family; however, these divisions did not last. The first division took place after the death of the first landgrave in 1308, when Heinrich's sons Otto I and Johann became landgraves in the " Land an der Lahn " (Marburg) and Niederhessen (Kassel), respectively. However, since Johann died in 1311, both parts of the country were reunited under Otto.

Only the division of the estate by Landgrave Philipp the Magnanimous , who divided the Landgraviate among his four sons in 1567, finally caused the almost four hundred years of separation into the Landgraviate of Hessen-Kassel (whose regent was made electoral prince in 1803 ) and the Landgraviate of Hessen-Darmstadt (the later Grand Duchy of Hesse ). The Landgraviates of Hesse-Marburg and Hesse-Rheinfels , created when the inheritance was divided, soon fell again due to the extinction of the ruling houses and inheritance to Hesse-Kassel and Hesse-Darmstadt. The strong influence of Hesse on imperial politics up to this division of 1567 decreased significantly in the following period.

When the Grafschaft Ziegenhain fell in 1450, the connection between the two large parts of Upper Hesse and Lower Hesse , which had been separated from each other until then, was achieved.

With the legacy of the County of Katzenelnbogen in 1479, the territory of the Landgraviate reached the Middle Rhine with the city of St. Goar on the left bank of the Rhine and the Rheinfels Castle above, as well as today's southern Hesse around Darmstadt up to the then course of the Neckar .