This article deals with the county, the later Principality and Free State of Waldeck in Hesse. For the ruling house of the same name, see Haus Waldeck ; for castles with the name see Burg Waldeck ; for other meanings see Waldeck (disambiguation) .

The state of Waldeck emerged in the Middle Ages around Waldeck Castle on the Eder in the northwest of today's state of Hesse as an independent county of the Holy Roman Empire . In 1712 it became a principality with the residence town of Arolsen (today Bad Arolsen ), which was also united with the county of Pyrmont zu Waldeck-Pyrmont from 1848 to 1921 . The Counts and Princes of Waldeck came from the Waldeck family .

As a result of the November Revolution of 1918, the principality became a free state. In 1921 Pyrmont was separated again and incorporated into Prussia ; the remaining Free State of Waldeck was dissolved in 1929 when it was incorporated into the Prussian province of Hessen-Nassau .

From 1942 to 1974 there was once again a regional authority with what was then the district of Waldeck , whose territory roughly corresponded to the former Free State and which was then merged into the newly formed district of Waldeck-Frankenberg in Hesse .

Blazon of the Waldeck family coat of arms : “An eight-pointed black star in gold . On the helmet with black and gold covers an open golden flight , each with a star . "

Open flight developed from the feather umbrella board.

Two golden lions, standing on an ornament, around which a black ribbon with the motto “PALMA SUB PONDERE CRESCIT” (The palm tree grows under the load) is wrapped as a sign bearer.

The castle Waldeck over the Eder is first attested in 1120. A branch of the Counts of Schwalenberg named themselves after this castle from 1180, after Volkwin II. Von Schwalenberg built the castle through his marriage to Luitgard, the daughter of Count Poppo I. von Reichenbach and Hollende and heiress von Waldeck. In the course of history this family succeeded in building up a small area of ​​dominion in what is now northern Hesse .

County of Waldeck until 1712

Initially, Waldeck was a fiefdom of the Archdiocese of Mainz . In 1379 the county became an imperial fief. After the death of Count Heinrich VI. In 1397 the family split into two lines, the older Landau line with Adolf III. and the Waldecker line with Henry VII , who even feuded with each other at times. Both lines came under the feudal sovereignty of the Landgraviate of Hesse in 1431 and 1438 - but also under the impression of the final landgrave victory over Kurmainz in 1427 and the fiefdom of the County of Ziegenhain in Hesse (from 1576 Hesse-Kassel ). The Landgrave paid the Counts of Waldeck a loan to repay their debts and also took over their remaining debts.

In 1486, after the death of Henry VIII, the Waldecker line split again into the Waldeck-Wildungen and Waldeck-Eisenberg lines . When the older Landau line expired in 1495 with Otto IV , their property went back to the Wildungen and Eisenberg lines. In 1526 and 1529, Philip IV of Waldeck-Wildungen and Philip III. von Waldeck-Eisenberg introduced the Reformation . Several divisions of the estate led to the emergence of other different lines and subsidiary lines, which were reunited in 1692 by the newer Wildunger line.

In 1625 the County of Pyrmont also came to the Counts of Waldeck by inheritance contract , who from then on called themselves Counts of Waldeck and Pyrmont . A union of the two spatially separated domains in the constitutional sense did not take place until the 19th century.

In 1639 Count Philipp Dietrich von Waldeck from the new Eisenberger line became heir of the last Count von Pallandt -Culemborg and took over the county of Culemborg in Gelderland with the dominions of Werth in Münsterland , Palant and Wittem . He was followed in 1664 by his brother Count Georg Friedrich zu Waldeck ; he called himself accordingly "Georg Friedrich Graf and Mr. Waldeck, Pyrmont and Cuylenburg, Freiherr zu Tonna, Paland, Wittem, value." In 1682 he was Emperor I. Leopold as a prince of Waldeck in the Imperial Prince collected. After his four sons had all died before him, on June 12, 1685 he introduced the Primogenitur in the entire Waldeck house by contract with his cousin, Count Christian Ludwig from the newer Wildunger line . Emperor Leopold I confirmed this contract in 1697. After Georg Friedrich's death in 1692, Christian Ludwig became sole ruler of the entire county.

The county Cuylenburg and the rule Werth fell in 1714, due to the marriage of Georg Friedrich's second daughter Sophia Henriette (1662–1702) with Duke Ernst von Sachsen-Hildburghausen , in November 1680 , to Sachsen-Hildburghausen. In 1640 the Tonna lordship in Thuringia came to Waldeck-Pyrmont through inheritance as a fief of the dukes of Saxony-Altenburg ; however, it was sold to Duke Friedrich I of Saxe-Gotha-Altenburg in 1677 .

During the American War of Independence from 1775 to 1783, Prince Friedrich Karl August made three regiments available to the British for battle in America against payment . A total of 1225 Waldeck soldiers fought in America.

The turmoil at the turn of the 18th to the 19th century survived the principality, which had joined the Rhine Confederation in 1807 without being incorporated into the Napoleonic Kingdom of Westphalia . Waldeck had to undertake to ensure equality for Catholic citizens in their religious practice and to provide 400 soldiers in the event of a campaign. A short-term division of the estate in 1806 between the brothers Friedrich and Georg ended after only six years with Friedrich's death.

In 1815 Waldeck joined the German Confederation , in 1832 the German Customs Union . In 1847, at the instigation of Prussia , the feudal sovereignty of Hessen-Kassel over Waldeck (as well as Schaumburg-Lippe ) was finally revoked by an arbitration award of the Bundestag , after this had already been effectively resolved by Waldeck's accession to the Rhine Confederation in 1807. For Hessen-Kassel this was a loss, because it could no longer claim a right of repatriation.

As early as 1813 the prince had tried since 1645 in personal union mitregierte County Pyrmont (since 1807 Principality) with Waldeck the Principality of Waldeck-Pyrmont to unite constitutional law, but what is actually managed by political opposition until the 1849th But even after that, until 1863/64, there was a small state parliament in Pyrmont specifically for budget law. (For the state's court system, see Courts in the Principality of Waldeck and Pyrmont .) 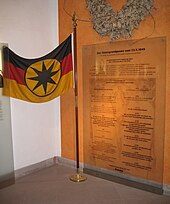 State constitution for the principalities of Waldeck and Pyrmont of May 23, 1849 (excerpt)

On August 1, 1862, Waldeck-Pyrmont concluded a military convention with Prussia. Therefore, in the war of 1866 between Prussia and Austria, it was on the side of Prussia and thus avoided annexation (in contrast to the neighboring Electorate of Hesse ) .

Since the small and financially weak principality could not pay its contributions to the North German Confederation , the state parliament unanimously rejected the federal constitution in order to urge the prince to sign an accession agreement with Prussia. Bismarck had previously rejected the idea of ​​a union with Prussia for reasons of prestige. As a result, Waldeck-Pyrmont concluded the accession agreement with Prussia in October 1867, according to which the principality remained nominally independent, but from January 1, 1868, Prussia took over the state deficits and internal administration with the justice and school system of the principality, albeit in accordance with Waldeck's laws. Since then, Prussia has appointed a state director with formal agreement with the prince. The jurisdiction was exercised by the Prussian regional courts in Kassel and, for the Pyrmont region, in Hanover. The prince was only left with the administration of church affairs, the right to pardon and the right to approve laws. He also continued to receive the income from the domains. The contract was subsequently renewed every ten years. Waldeck thus also remained a federal state of the federal government expanded to form the German Empire .

After the end of the First World War , the last ruling prince, Friedrich (1865–1946), was declared deposed on November 13, 1918 by representatives of the Kassel workers 'and soldiers' councils who had traveled there. The previous principality of Waldeck-Pyrmont became a free state within the Weimar Republic . However, no new constitution was subsequently created, so the monarchical constitution of 1849/1852 remained formally in force until 1929. The provisions of Akzessionsvertrages with Prussia also remained in force even after the county Pyrmont separated on 30 November 1921 after a referendum, and as part of a treaty with Prussia the Prussian province Hannover associated with the district Hameln to Hamelin-Pyrmont district was combined .

It was not until 1926 that the Free State of Prussia canceled the accession agreement. Since Waldeck was no longer financially viable without unreasonable tax increases after the amendment of the Financial Equalization Act on April 9, 1927, which meant a reduction in the Reich tax allocations by almost 600,000 Reichsmarks, the Free State of Waldeck was dissolved on April 1, 1929 and became part of the province of Hesse- Nassau incorporated into Prussia. Waldeck ceased to exist as an independent state.

With the transition to Prussia in 1929, the three districts of Waldeck, which had already been formed in 1849/50, the district of Eder , Eisenberg and Twiste , initially continued to exist. The previous enclaves Höringhausen and Eimelrod , which had fallen to Prussia from the Grand Duchy of Hesse as exclaves of the Vöhl district in 1866 , were incorporated into the Eisenberg district. The Reich government ( Papen cabinet ) merged the Eder and Eisenberg districts in 1932, and the Twiste district was to be merged on April 1, 1934 with the neighboring Wolfhagen district with its administrative headquarters in Arolsen. This did not happen after the Nazi takeover of power in 1933. A law of February 28, 1934 repealed the merger of Eder-Eisenberg and the planned merger of Twiste-Wolfhagen.

On February 1, 1942, the three Waldeck districts were combined to form the new Waldeck district with the district town of Korbach . This gave rise to another regional body that bore the name Waldeck and whose area roughly coincided with that of the earlier principality. As part of the Prussian province of Hessen-Nassau (from 1944 province of Kurhessen ), the district of Waldeck became part of the new state of Greater Hesse in 1945 , which in 1946 became today's state of Hesse .

In the course of the Hessian regional reform of 1974, the Waldeck district was merged with the neighboring Frankenberg district to form the new Waldeck-Frankenberg district. However, the city of Züschen lost its centuries-old affiliation to Waldeck and became a district of the city ​​of Fritzlar in the Schwalm-Eder district .

Internal administrative structure of the state of Waldeck

Counts and Princes of Waldeck

Original coat of arms of the Counts of Waldeck

Family coat of arms of the Counts of Waldeck 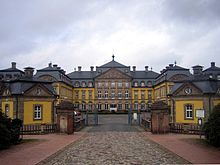 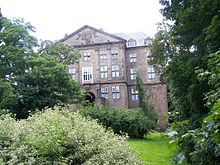 Georg Friedrich was raised to the rank of personal imperial prince on June 17, 1682 by Emperor Leopold I. After his death, his sub-county passed to Christian Ludwig von Waldeck-Wildungen by inheritance, who thus reunited both parts of the county in one hand.

Princes of Waldeck and Pyrmont

Heads of the House of Waldeck-Pyrmont

Land estates existed in Waldeck since the formation of the principality . These existed with minor modifications during the first half of the 19th century. With the March Revolution of 1848, a joint state parliament was created for Waldeck-Pyrmont . During the Weimar Republic there was a state representation as a state parliament.

100% missing votes = nominations not represented in the state representation

The extensive written records of the county, the principality and the Free State of Waldeck from the 11th to the 20th century are kept in the Hessian State Archives in Marburg . The documents, files as well as maps and plans have been gradually transferred from Arolsen to Marburg for the purpose of archival indexing since the late 19th century. After Waldeck joined the Prussian province of Hesse-Nassau in 1929, the documents remained permanently in the Marburg State Archives.