The Principality of Reuss Older Line was a small state in the east of what is now Thuringia . The state capital was Greiz . In 1778 Reuss a.L. was elevated to a principality . 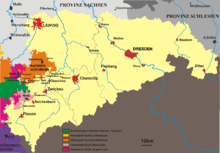 Map of Saxony in the 19th century; the Principality of Reuss Älterer Linie is drawn in light pink on the left

Reuss older line is a main branch of the Reuss family . The Principality of Reuss Older Line was established on May 12, 1778 with the uprising of Heinrich XI. in the imperial princes from the county of Greiz older line. This was on March 17, 1768 after the death of Heinrich III., Count of Untergreiz, and the union of Obergreiz and Untergreiz under Heinrich XI. originated. Around a hundred years earlier, on August 26, 1673, Heinrich I Reuss-Obergreiz and all the Lords Reuss were raised to the rank of imperial count under the suzerainty of the Bohemian crown. In 1807 the principality joined the Rhine Confederation and was thus under the protection of Napoleon until 1813 , before it became a member of the German Confederation in 1815 . At the Congress of Vienna , Prince Heinrich XIII. win over an area previously disputed between the kingdom of Saxony and Reuss. These were the villages of Altgommla and Kühdorf, which once belonged to the Mildenfurth monastery, as well as parts of the villages of Alt- and Neugernsdorf . In 1833 Reuss a. L. became a member of the German Customs Union in the Customs and Trade Association of the Thuringian States .

In the German War of 1866, Reuss was an ally of Austria due to historical connections (including Heinrich XIII. Was Imperial-Austrian General Feldzeugmeister ) and dynastic relationships . During the war, the principality was kept apart from the events. The Prussian declaration of war took place on June 21st, and only on August 11th, 1866 came the military occupation by two companies. There was still no thought of an independent Reuss Ä. L. in the North German Confederation newly founded by Prussia . Rather, this state should be divided up between Prussia ( Ziegenrück district ) and Reuss younger line within the framework of an area exchange . However, the intercession of the Grand Duke of Saxe-Weimar-Eisenach with the Prussian King Wilhelm I saved the principality from this fate. With regard to assignments, it was also recognized that Reuss was too small to be made even smaller. Therefore, instead of the land cession, a cash payment of 100,000 thalers was made , half of which was borne by the Princely House and half by the land. On September 26, 1866, the peace treaty was signed in Berlin, through which Reuss a. L. forcibly joined the North German Confederation. After accession, it had only limited sovereignty . In particular, this meant that foreign policy and military sovereignty passed to Prussia, while domestic and cultural policy remained in their own area of ​​responsibility. With the establishment of the empire in 1871, the “ Prussian system” of the North German Confederation was transferred to the newly created German nation-state and Reuss Ä. L. was henceforth a federal state in the German Empire . When in 1880 the federal states were obliged to set up permanent representations at the Bundesrat in Berlin, the Principality transferred its representation to the Grand Duchy of Mecklenburg-Schwerin . After the death of Heinrich XXII. This was taken over by the Grand Duchy of Saxony-Weimar-Eisenach.

Reuss a. L. remained a very conservative state. The founding of associations required government approval and political associations of any kind were prohibited. In the summer of 1851 the Landtag passed a constitution , but it was delayed so long that publication was no longer necessary in view of the increasing reaction. Only the admission into the North German Confederation made a constitutional discussion necessary again. With the constitution of March 28, 1867, the principality was the last state in Thuringia to introduce a constitutional monarchy . The new Greiz Landtag was composed of twelve members , three of whom were appointed by the prince, two by manor owners and the largest farmers, and seven were elected indirectly in three urban and four rural constituencies . Prince Heinrich XXII. continued to try to continue the absolutist mode of government which made Reuss a. L. a stronghold of Orthodox Lutheranism . His behavior towards the representatives of Prussia was characterized by dislike and hostility. The Prussian press gave him the nickname "the naughty one". In particular, the armaments policy and foreign policy of the empire he did not agree, so that L. ä among others as the only state Reuss. The Federal Council in 1900 against China Expedition and 1901 against the budget of the Foreign Office , as well as against the colonial budget agreed. But there were also votes against the introduction of compulsory civil marriage , the BGB , the Kulturkampf Laws and even the Socialist Laws.

The principality was a state of extremes, as the only German state without debts in 1910 , and as the only one without a school until the establishment of the municipal grammar school in Greiz in 1879, which led to the university entrance qualification.

With the death of Prince Heinrich XXII. The reign of the older line ended in 1902, as his son, Prince Heinrich XXIV. had been declared insane and thus permanently incapable of governing . Thus the guardianship and regency fell to Prince Heinrich XIV. (Reuss younger line) . Since 1908 his son Heinrich XXVII ruled . both principalities in personal union until 1918.

After the November Revolution in 1918, Reuss a. L. became a Free State, but in 1919 it already merged with the Free State of Reuss j. L. united to form the People's State of Reuss with the capital Gera , which in turn became part of the state of Thuringia in 1920.

The textile industry in particular was strongly represented in Reuss a. L. In 1860 worsted yarn was introduced instead of linen and cotton weaving . There were dyeing and finishing plants to refine the weaving products . The first mechanical loom was set up in Greiz in 1864 . In 1900 there were 10,876 looms.

As part of the separation of administration and justice, a district office was set up in Greiz for the entire principality on October 1, 1868 . In the Burgk exclave , the local judicial office took over some of the powers of the district administration.

The Principality joined the Dresden Mint Treaty in 1838 . Two dollars in the Prussian 14-taler monetary standard now corresponded to 3 1 / 2   South German Gulden in 24 1 / 2  -Gulden-feet, which should be considered as common club coin of the "contra end here states". This club coin of "2 Taler = 3 1 ⁄ 2   Gulden" was legally valid in every Zollverein country - regardless of who the respective issuer of the club coin was. Several Reuss lines minted their own coins in the Prussian coinage system (1 Reichstaler at 24 groschen at 288 pfennigs, from 1838 1 taler at 30 silver groschen at 360 pfennigs):

It was only with the introduction of the mark as imperial currency on January 1, 1876 under the law of December 4, 1871, that the fragmentation of the monetary system was lifted.

The Thurn-und-Taxis-Post secured the post office shelf through contracts with the Principality of Reuss:

The common administration could already be recognized from the outside by the name, the postal coat of arms and the uniforms, which differed by different collar colors. The name of the post office was: “Fürstlich Reusssche, Fürstlich Thurn und Taxissche Lehenspostexpedition”. The postal coat of arms therefore combined both coats of arms, below the Reusser, above the princely Thurn and Taxissche. From 1852 to 1866, the Thurn-und-Taxis-Post issued its own postage stamps in two different currencies. Reuss belonged to the Northern District with penny currency. From 1867 the mail shelf was transferred to Prussia.

As a member of the German Confederation , the principality provided a contingent of 223 infantry and belonged to the 12th battalion of the reserve division of the armed forces . Since the establishment of the German Confederation, the two principalities jointly maintained a battalion of 745 infantry. In 1854 the strength of the peace was increased to six companies, with Reuss Ä. L. one hunter division of two, Reuss j. L. provided a battalion of four companies.

After the military convention concluded with Prussia on February 4, 1867 in the German Empire, together with the contingents of Sachsen-Altenburg and Schwarzburg-Rudolstadt, the princely Russian military of both lines formed the 7th Thuringian Infantry Regiment No. 96, which was part of the 4th Prussian Army Corps belonged in Magdeburg. A battalion was garrisoned in Gera , from which a small detachment was sent to Greiz every month.

Both principalities of Reuss had a common coat of arms. Blazon : The coat of arms consisted of a squared shield. In the fields:

The national colors were black, red and gold.