Sachsen-Coburg-Saalfeld was an Ernestine duchy with Coburg as the royal seat . 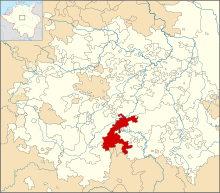 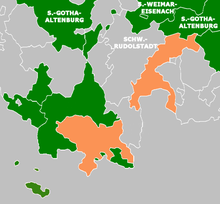 Saxe-Coburg-Saalfeld (1820). The Principality of Lichtenberg is not on the map

Saalfeld Castle , built as a ducal residence from 1677

After Duke Ernst I the Pious of Saxe-Gotha died on March 26, 1675 in Gotha, the principality was divided among his seven sons in 1680: Johann Ernst (1658–1729) received Saxe-Saalfeld. The new principality , which did not have full state sovereignty , but was dependent on the higher authorities in Gotha for government affairs, consisted of the offices of Saalfeld , Graefenthal and Probstzella . Saalfeld was a royal seat from 1680 to 1735.

When Duke Albrecht von Sachsen-Coburg died in 1699 without surviving descendants, disputes arose, especially with Bernhard I von Sachsen-Meiningen , which were not settled until 1735. Most of Saxony-Coburg came to the youngest Ernestine line of Saxony-Saalfeld, which gave rise to the principality of Saxony-Coburg-Saalfeld. However, the offices of Sonneberg and Neuhaus had to be transferred to Sachsen-Meiningen and Sonnefeld to Sachsen-Hildburghausen. When the Duchy of Saxony-Römhild was divided up in 1710, the third of the Römhild office and five twelfth of the Themar office remained with Sachsen-Coburg.

After the death of Duke Johann Ernst in 1729, his sons Christian Ernst and Franz Josias ruled the country, consisting of two separate parts of the country, together, but from different places of residence. Christian Ernst stayed in Saalfeld while Franz Josias chose Coburg as his residence. In 1745 Duke Franz Josias inherited the Saalfeld part of the country from his brother. In 1747 he was able to legally anchor the right of birthright ( primogeniture ) in the succession to the throne and thus ensured the long-term survival of the House of Saxony-Coburg-Saalfeld together with a rapidly growing family. His youngest son, Prince Friedrich Josias , made himself known as Prince Coburg and the principality through his victories as imperial general and field marshal in the Austro-Turkish War and in the first coalition war against France. Brother and regent Duke Ernst Friedrich was better known for the desolate finances of his principality, which from 1773 resulted in compulsory debt management by an imperial debit commission until 1802.

Duke Franz Friedrich Anton , who ruled for only six years, from 1800 to 1806, ensured, in particular through his minister Theodor Konrad von Kretschmann, a renewal of the ailing duchy and in 1805 contractually between Coburg and Saalfeld for a unified state system with a state administration of the principality, the In 1806 with the end of the Holy Roman Empire, full sovereignty was granted. Since 1805, the Themar office belonged completely to Sachsen-Coburg-Saalfeld.

On December 15, 1806, Saxe-Coburg-Saalfeld joined the Rhine Confederation with the other Ernestine principalities . From November 1806 until the Peace of Tilsit in July 1807 the principality was occupied by the French. Duke Ernst I was only able to return to his country afterwards from Königsberg in East Prussia. A border treaty with the Kingdom of Bavaria in 1811 led to a territorial settlement over disputed areas. The places Fürth am Berg , Hof an der Steinach , Niederfüllbach and Triebsdorf came to Saxony-Coburg, Gleußen , the Schleifenhan mill , Buch am Forst and Herreth became Bavarian. After the sovereign fought on the side of the Allies in 1813, the Congress of Vienna brought him territorial growth and membership in the German Confederation in 1815 with an area to the left of the Rhine, later called the Principality of Lichtenberg . On August 8, 1821, the duchy received a constitution .

The extinction of the oldest Saxon-Gotha-Altenburg line in 1825 led again to inheritance disputes in the Ernestine family . On November 12, 1826, the arbitration ruling of the head of the family, King Friedrich August I of Saxony , led to the comprehensive restructuring of the Ernestine duchies. Neuhaus and Sonneberg finally fell to Saxony-Meiningen with the so-called Meininger Oberland . Sachsen-Coburg-Saalfeld ceded Sachsen-Saalfeld and the Themar office to Sachsen-Meiningen. In return, it received the Duchy of Saxe-Gotha without the offices of Kranichfeld and Römhild, which fell to Sachsen-Meiningen, and without Altenburg (offices of Altenburg, Ronneburg, Eisenberg, Roda and Kahla), which the previous Duke of Saxe-Hildburghausen took over, as well as from previous Sachsen-Hildburghausen the offices of Königsberg and Sonnefeld. The new duchy of Saxe-Coburg and Gotha was thus created as a personal union of the two duchies of Saxe-Coburg and Saxe-Gotha.

A representation of the coat of arms of the Dukes of Saxe-Coburg-Saalfeld can be found at the former Hotel Victoria in Royal Tunbridge Wells . The coat of arms was affixed in honor of the father of the future Queen Victoria of Great Britain and Ireland, Edward Augustus, Duke of Kent and Strathearn . Some colors were mixed up during later restorations. Left (heraldic right) the royal British coat of arms with the emblems of England, Scotland and Ireland as well as Braunschweig, Lüneburg and the Lower Saxony horse in the heart shield. Right (heraldic left) the family coat of arms of Sachsen-Coburg-Saalfeld. 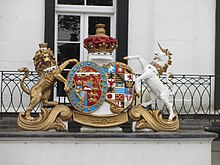 Blazon : The coat of arms is divided five times and split twice with a central shield on the fifth and eighth field. In the fields:

The children of Duke Franz Friedrich Anton in particular ensured the dynastic success of the Coburg house. Due to the fame of Prince Friedrich Josias, the daughter Princess Julie (later Grand Duchess Anna Feodorovna) married the Russian Grand Duke Constantin in 1796. Daughter Princess Marie Luise Victoire married Eduard August, Duke of Kent and Strathearn in 1818 , and became the mother of Queen Victoria . The youngest surviving son, Prince Leopold, became King of the Belgians in 1831 as Leopold I. The five years older brother Prince Ferdinand married Maria Antonie Gabriele von Koháry in 1816 , who came from one of the richest aristocratic families in Hungary, and founded the Catholic Line Sachsen-Coburg-Koháry. The son of the same name, Prince Ferdinand, became Dom Fernando II. King of Portugal in 1837 and the other son, Prince August, was the father of Ferdinand I , Prince in 1887 and Tsar of Bulgaria in 1908. In addition, heir to the throne, Duke Ernst I, was the father of Prince Albert , The Prince Consort , who in 1840 became the husband of Queen Victoria, his cousin , of Great Britain .

Minister of State of Saxony-Coburg-Saalfeld