When Ernestine duchies and Saxon duchies refers to a variable number of small duchies in today's Thuringia , Saxony-Anhalt , Saxony and Upper and Lower Franconia , by inheritance among the descendants of the Duke and Elector Ernst of Saxony-Wittenberg emerged.

Coat of arms of the Ernestines on a landmark

The House of Wettin was divided in 1485 into two lines ( Treaty of Leipzig ), the younger Albertine , founded by Albert the Courageous , the later Electorate of Saxony (Residenz Dresden ) and later the Polish-Lithuanian ruled, and the older Ernestinische that initially the Electorate received (Residenz Wittenberg ).

While the Albertiner exclude the primogeniture introduced and thus ensured the cohesion of their country part that remained Ernestiner in the inheritance , which resulted ongoing for centuries fragmentation (including the following additions and rearrangement) of ernestischen duchies that ultimately only after the First World War ended was: The respective changes (and the resulting respective duchies) recorded, seen in the historical course, in the end only areas that by today's standards do not even correspond in size to a district .

In 1547, due to the Wittenberg surrender , the Ernestines finally lost their electoral dignity with the Duchy of Saxony (-Wittenberg) and most of their hereditary lands to the Albertines and were initially only able to maintain part of their Thuringian possessions, namely the offices, towns and castles of Gerstungen , Eisenach , Wartburg , Kreuzburg , Tenneberg , Waltershausen , Leuchtenburg , Roda , Orlamünde , Gotha , Jena , Kapellendorf , Roßla , Weimar , Wachsenburg , Dornburg , Camburg , Buttstädt , Arnshaugk , Weida , Mildenfurth and Ziegenrück .

After the death of Duke Johann Ernst I von Coburg in 1553, the offices of Coburg , Sonneberg , Hildburghausen , Königsberg , Veilsdorf and Schalkau were added to the Ernestine property . The Ernestines received further territories in 1554 through the Naumburg Treaty of Elector August from the Albertine line, d. H. the offices of Altenburg , Eisenberg , Sachsenburg and Herbesleben (excluding Tennstedt ), the cities of Auma , Neustadt , Pößneck and Triptis as well as the ownership of the dissolved monasteries Volkenroda and Oldisleben . In 1555 they exchanged the rule of Römhild from the Counts of Mansfeld . The Ernestine House finally acquired a share of 7/12 from the Henneberg inheritance (1583), but definitely not until 1660, namely the offices of Meiningen , Themar , Maßfeld , Behrungen , Henneberg , Milz , Ilmenau , Kaltennordheim , Frauenbreitungen , Sand and Wasungen . 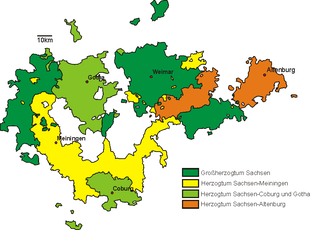 The Ernestine areas had been severely fragmented from 1573 at the latest, barely a century after the division of Leipzig, due to the ongoing division of the inheritance (see timetable below). The resulting partial duchies are called Ernestine or Saxon duchies . At times, up to ten individual duchies existed at the same time. The fragmentation of the Ernestine duchies and the neighboring Russian and Schwarzburg principalities, which led to political insignificance, made Thuringia a prime example of small states ("duodec principals", " operetta states ") within the German Confederation .

In 1826, it came after the extinction of the House of Saxe-Gotha-Altenburg , with the award King Frederick Augustus I of Saxony to the last reorganization of the duchies of Saxe-Gotha , Sachsen-Altenburg , Saxe-Meiningen , Saxony-Hildburghausen and Saxony- Coburg-Saalfeld .

The Duke of Saxony-Hildburghausen exchanged his duchy with Saxony-Altenburg. The Sachsen-Meiningen line got Sachsen-Hildburghausen and from Sachsen-Coburg-Saalfeld the Saalfeld region as well as the Themar office and the places Mupperg , Mogger , Liebau and Oerlsdorf . The Duchy of Saxe-Coburg-Saalfeld received the duchy of Saxe-Gotha, of Saxe-Hildburghausen the offices of Königsberg and Sonnefeld and of Saxe-Meiningen the goods of Callenberg and Gauerstadt and became the new double duchy of Saxe-Coburg and Gotha . Saxony-Weimar-Eisenach , which had meanwhile been elevated to a Grand Duchy at the Congress of Vienna and was considerably enlarged in terms of territory , was left out.

Only in this context was the principle of primogeniture among the Ernestinians, i.e. H. finally introduced around three and a half centuries after the division of Leipzig in 1485.

In 1867 the four remaining Ernestine states joined the North German Confederation , before they, together with other principalities, became the state of Thuringia between 1919 and 1920 and Coburg became part of Bavaria after a referendum.

Duration of the individual duchies

Overview of the individual lines and principalities of the Wettins that have arisen through inheritance divisions since the formation of the Ernestine and Albertine lines in the Leipzig division in 1485, as well as their inheritance when they became extinct. (To enlarge please click on the picture!) 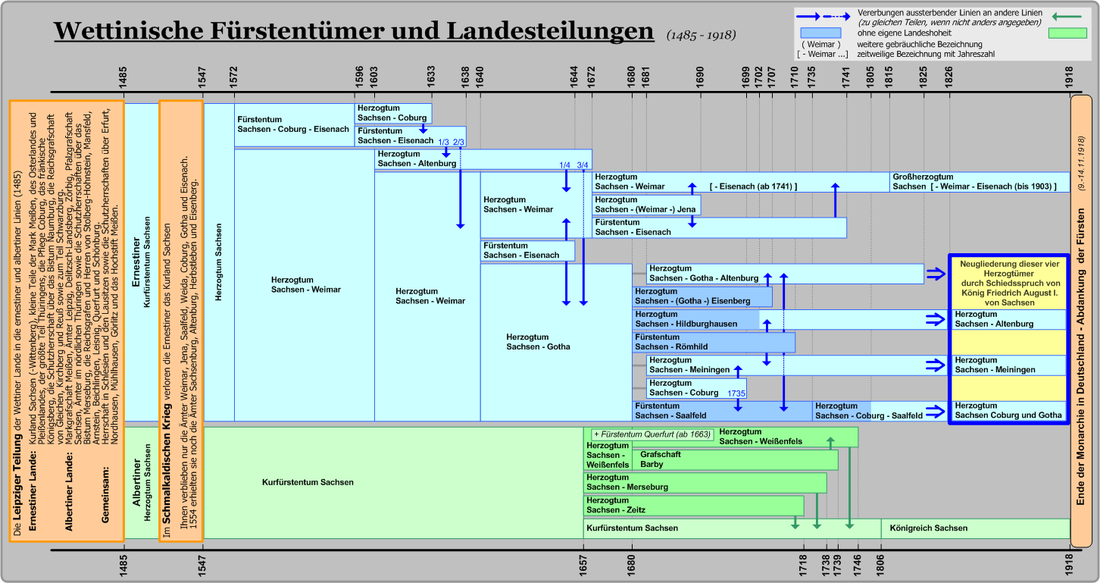 Branches of the Ernestine and Albertine lines since 1485