Duchy of Saxe-Coburg and Gotha

The duchy was created according to an arbitration ruling by King Friedrich August I of Saxony with the partition treaty to Hildburghausen of November 12, 1826 for the comprehensive reorganization of the Ernestine duchies . After the Saxon-Gotha-Altenburg line became extinct , the Duke of Saxe-Hildburghausen exchanged his duchy for Saxe-Altenburg . The Sachsen-Meiningen line got Sachsen-Hildburghausen and from Sachsen-Coburg-Saalfeld the Saalfeld region as well as the Themar office and the places Mupperg , Mogger , Liebau and Oerlsdorf . The Duchy of Saxe-Coburg-Saalfeld received the Duchy of Saxe-Gotha , of Saxe-Hildburghausen the offices of Königsberg and Sonnefeld and of Saxe-Meiningen the goods of Callenberg and Gauerstadt .

In addition, after the Congress of Vienna, sovereign Duke Ernst von Sachsen-Coburg-Saalfeld was awarded the Principality of Lichtenberg an der Nahe in 1816 as compensation for the help given to the allies in the fight against France . Due to the great distance to Coburg and the unrest as a result of the Hambach Festival , the duke sold the principality to Prussia in 1834 .

The newly created duchy of Saxe-Coburg and Gotha was initially a double duchy. It was ruled by the House of Saxe-Coburg and Gotha in personal union, but there was only one vote in the Bundestag . The establishment of a unitary state had been neglected in 1826. According to the constitution of 1852, the duchies were linked in Realunion. The double duchy was then a quasi-federal unitary state. Subsequent attempts to merge the duchies failed in 1867 because the Gotha state parliament did not want to take on the high Coburg state debts, and in 1872, when the unification question was to be linked to the domain question.

Despite the low importance of the duchy in terms of German politics, Ernst II presented a plan to reform the German Confederation . According to the ideas of 1855/1856 there should be a German parliament next to the Bundestag.

There were two residential cities with Gotha and Coburg . Therefore, the entire ducal court and the court theater moved twice a year: from Coburg to Gotha and back. There were therefore two almost identical venues for the court theater, which were built at the same time in 1840 in Gotha (destroyed in World War II) and Coburg (today the Coburg State Theater ). In addition to the residential castles of Friedenstein in Gotha and Ehrenburg in Coburg, the ducal family also used Reinhardsbrunn Castle near Gotha and the Callenberg and Rosenau castles near Coburg.

Only the Duchy of Gotha, along with the Duchies of Saxe-Meiningen , Saxe-Altenburg and above all the Grand Duchy of Saxe-Weimar-Eisenach, belonged to the states that maintained the University of Jena . It also had its own regional court , while the one responsible for the Duchy of Coburg was in Meiningen .

The Duchy of Saxony-Coburg and Gotha received a constitutional constitution on May 3, 1852, which had taken over essential parts of the fundamental rights from the constitution of the Frankfurt National Assembly . It joined the German Customs Union in 1834 . In 1867 it became a federal state of the North German Confederation and in 1871 the German Empire . In the Federal Council in Berlin, where it had one vote, it had its own authorized representative and, like most other Thuringian states , was not represented by the Grand Duchy of Saxony-Weimar-Eisenach until 1913 .

Blazon : The coat of arms is divided five times and split three times with a central shield on the intersection of the sixth, seventh, tenth and eleventh fields. In the fields:

There was a separate Landtag for each duchy (11 members in the Coburg Landtag and 17 members in Gotha), which by meeting could form a joint Landtag. There was a State Ministry in Gotha for the two duchies, but this had two almost independent ministerial departments in Coburg and Gotha. The Minister of State headed the Gotha ministerial department and was responsible for joint state affairs as well as economic and commercial policy, the judiciary and the implementation of Reich laws. He was unable to intervene in state affairs in Coburg, such as local government, police duties, church and school as well as asset management and finances, but also in court matters until 1891. The finances of the two duchies remained fundamentally separate. Above all, the financial relations with the Reich and the joint tasks were handled through a joint budget. Subsidies from both state budgets were given in a ratio of 7: 3 between Gotha and Coburg.

The duchy joined the Dresden Mint Treaty in 1838 . Two dollars in the Prussian 14-taler monetary standard now corresponded to 3 1 / 2   South German Gulden in 24 1 / 2  -Gulden-feet, which should be considered as common club coin of the "contra end here states". This club coin of "2 Taler = 3 1 ⁄ 2   Gulden" was legally valid in every Zollverein country - regardless of who the respective issuer of the club coin was. Saxe-Coburg and Saxe-Gotha minted their own coins:

It was only with the introduction of the mark as imperial currency on January 1, 1876 under the law of December 4, 1871, that the fragmentation of the monetary system was lifted.

The Thurn-und-Taxis-Post secured the post office shelf through contracts with the Ernestine duchies:

After Duke Friedrich IV of Gotha and Altenburg died on February 11, 1825, without leaving heirs, the Duchy of Gotha fell to Duke Ernst I of Coburg-Saalfeld in the inheritance distribution plan of November 12, 1826, who transferred Saalfeld to Saxony- Meiningen had to resign.

The common administration could already be recognized from the outside by the name, the postal coat of arms and the uniforms, which differed by different collar colors. The name of the post office was: "Herzoglich Coburgische, Fürstlich Thurn und Taxissche Lehenspostexpedition" or "Herzoglich Gothaische, Fürstlich Thurn und Taxissche Lehenspostexpedition". The postal coat of arms therefore combined both coats of arms, the ducal below and the princely Thurn and Taxissche above. From 1852 to 1866, the Thurn-und-Taxis-Post issued its own postage stamps in two different currencies. Saxony-Coburg belonged to the southern district with Kreuzer currency, Saxony-Gotha to the northern district with Groschen currency. From 1867 the post office shelf passed to Prussia, which - like the North German Confederation - issued stamps in Groschen and Kreuzer currency until the introduction of the Reich currency in 1876.

For details of the judicial system, see Courts in the Duchy of Saxony-Coburg and Gotha

As a member of the German Confederation , the duchy provided a contingent of 1,366 infantry and formed the 2nd battalion of the reserve division of the federal army . When the duchy of Saxony-Gotha fell to the Coburg line after the extinction of the House of Saxony-Gotha in 1825, Gotha was united with the Coburg contingent. Thus there was a battalion of infantry in Gotha and a hunter division in Coburg. In 1855 the contingent was brought to two battalions of four companies.

After the military convention concluded with Prussia in 1867 and renewed in 1873 , the troops of the two duchies in the German Empire and those of Sachsen-Meiningen formed the 6th Thuringian Infantry Regiment No. 95 , which belonged to the 11th Prussian Army Corps in Kassel. Its 1st battalion was garrisoned in Gotha , the 2nd battalion in Hildburghausen and the III. Battalion in Coburg . 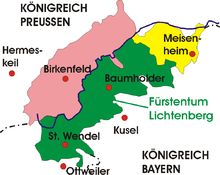 The duchy was divided into the cities of Coburg , Königsberg , Neustadt bei Coburg , Rodach and the district office of Coburg . Outside the core area of ​​the duchy were three exclaves:

The Principality of Lichtenberg , which until 1834 belonged to the Duchy of Coburg, had around 25,000 inhabitants in 1816 on an area of ​​537 km². The two cities of the principality were St. Wendel and Baumholder .

Dukes of Saxe-Coburg and Gotha

Minister of State of Saxe-Coburg and Gotha