Ebenshausen is a district of the city of Amt Creuzburg in the Wartburg district in Thuringia .

Ebenshausen is about ten kilometers (as the crow flies) north of Eisenach . The location of Ebenshausen is a street village , the place is located in a narrow section of the valley on the northern bank of the Werra . Neighboring towns are Frankenroda in the west, Nazza in the north and east and Mihla in the south; to Buchenau owned small settlement Friday Zella is located 1.5 km south.

On the riverside path in Ebenshausen

At the flood ditch in Ebenshausen

View over the Werra to the footbridge

The place Ewanshusen was mentioned for the first time in 1229 in a document from Landgrave Heinrich Raspe IV. This was the reason for the 775th anniversary celebration in 2004. According to local tradition, the place initially consisted of three farms and belonged to an Ifta landlord. However, the settlement history can be documented much earlier, which is documented with archaeological finds from the Bronze Age burial mound at Freitagszella, only 1200 m away . Already around the year 1000 the Werra valley near Ebenshausen was occupied by numerous settlements - these include Mihla and Frankenroda as well as today's desert areas of Werthausen , Wesse , Almenhausen and Münsterkirchen  - all within a 1500 m radius of the Mihla district.

In the 14th century, the Werra valley north of Eisenach was drawn into the struggle for supremacy in (West) Thuringia. First, the rulership of Treffurt , whose lords had made themselves unpopular as robber barons, was occupied by the Landgraves of Thuringia and Hesse and the Archbishopric of Mainz and divided up as inheritance ; this happened in 1336. As a result, there was a dispute between the Landgraves of Thuringia and the ore monastery of Mainz over the bailiwick Dorla and the influence in southern Eichsfeld . The Haineck Castle near Nazza was built by Landgrave Balthasar in 1392 , and the neighboring places under his rule: Hallungen , Nazza , Lauterbach , Neukirchen , Frankenroda and Ebenshausen - were combined to form the Haineck Castle District , they later formed the Haineck Office . Extensive fortifications were built not far from Haineck Castle - the Nazza Landwehr , the first part of it ran from Probsteizella over the Fuchsberg to Nazza. A second part blocked access to the Lempertsbachtal east of Ebenshausen (field name Landwehr ), a third part also blocked the Hallung valley near Nazza.

After 1500 the lords of Hopffgarten received the castle and the Haineck office as a pledge and from 1513 it was transferred as a hereditary fiefdom by the sovereign, Duke Friedrich the Wise . In the following subdivisions of the Wettin areas, the Haineck office and thus also Ebenshausen was always counted as part of the Ernestine part because it belonged to the Hopffgarten court . The Hopffgarten communities formed an exclave of the Gotha Duchy until 1920 . The Saxon office of Creuzburg ( Eisenach Duchy ), however, exercised civil jurisdiction, the criminal jurisdiction lay with the gentlemen of Hopffgarten, duties and taxes also had to be paid to the gentlemen of Harstall in Mihla .

The Ebenshausen parish church is said to have originally been in Werthausen. When this place became deserted, the parish passed to Frankenroda. The Dreifaltigkeitskirche built in Ebenshausen was a branch church of the Frankenrodaer Church. The first Ebenshausen village school was founded back in 1667, the schoolhouse, which is also the home of the village school teacher, was built around the same time as the church. In the 1950s it was still a one-class school, until 1970 the primary school was housed in it, then school lessons take place in the neighboring town of Mihla.

The village developed slowly, according to the tax list of the Creuzburg office there were 39 houses with around 230 inhabitants in 1730 in Ebenshausen, in 1827 there were 52 houses and 262 inhabitants. The population was mainly active in agriculture, but the area under cultivation was small, and there was no forest either, so attempts were made in an endless series of trials to gain possession of the adjacent desert areas of Werthausen and Wesse, whose inhabitants once settled in Ebenshausen had.

The quarrying of limestone gained a certain importance, quarries can be found on the steep slope west of the village, and burnt lime was also produced.

With the construction of the Werra Valley Railway, Ebenshausen received a common train station with the neighboring village of Frankenroda. The railway made it possible to take up new employment opportunities in the neighboring towns of Eisenach and Treffurt, but above all in the neighboring Buchenau soda plant . At the end of the Second World War , the population increased by leaps and bounds due to 120 resettlers and displaced persons, at that time there were 440 inhabitants.

The local council from Ebenshausen was most recently (after the local elections on May 26, 2019 ) composed of six councilors, all of whom belonged to the voters group Citizens for Ebenshausen. The honorary mayor Fred Leise was in office from 1990 until the municipality was dissolved. He was last re-elected in 2016.

The place Ebenshausen has a small inventory of historic half-timbered houses from the 16th to 19th centuries. The oldest preserved house in the village is dated to around 1530. 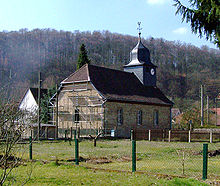 At the jetty, view from the place

Several trees in the district are designated as natural monuments :

For a few years now, the price archery , which always takes place at the beginning of September, has become the highlight of the village community's annual course.

Ebenshausen is an important stopover and stopover point for boat tours on the Werra and on the Werra Valley cycle path . On the outskirts of Ebenshausen there was already a campsite on the banks of the Werra in the 1970s, and the development of hiking and adventure tourism has increased further with the establishment of the Hainich National Park .

Kreisstraße 5 runs to Ebenshausen and connects the place with Mihla, Nazza and Frankenroda. In 1992 a bypass road was laid to the north of the village to calm traffic. The city of Eisenach and the A 4 can be reached via Landstrasse 1016 .

Operation of the Wartha-Schwebda railway, which passed Ebenshausen, was not resumed after the Second World War , as several bridges along the route between Mihla and Treffurt were destroyed. Today the nearest train station is in Eisenach.