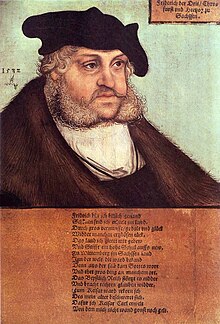 Frederick the Wise by Lucas Cranach the Elder 1532

Portrait of Frederick the Wise around 1500 by Albrecht Dürer 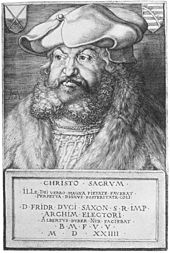 Friedrich the Wise, copper engraving by Albrecht Dürer around 1524

Hartenfels Castle in Torgau , the main residence of Frederick the Wise 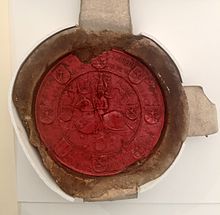 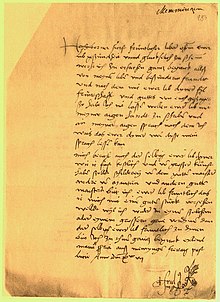 Friedrich was the eldest son of the Elector Ernst von Sachsen (1441–1486) and his wife Elisabeth (1443–1484), daughter of the Bavarian Duke Albrecht III. He was born at Hartenfels Castle in Torgau.

Due to the death of his father in 1486, the 23-year-old from the Ernestine line of the Wettins acquired the Saxon Kurland and the electoral dignity, but together with his brother Johann the Constant he ruled over the other widely scattered territories. Due to the division of Leipzig in 1485 between the Ernestine-Thuringian and Albertine-Meissnian line of the Wettins, made by his father Ernst and his brother Albrecht , Friedrich Torgau expanded into his main residence. The income from the ore and silver mines of the Saxon mines, his share of the due treasure trove of the mints Freiberg , Leipzig , Annaberg , Buchholz , Zwickau , Schneeberg and Langensalza secured him financial independence. His half-length portrait on the bearded groschen from 1492 is the first portrait of a regent on Saxon coins.

According to the traditional portraits, the elector was quite tall, which is why the papal nuncio Hieronymus Aleander described him as a “fat marmot”. Although Friedrich the Wise was not married, he had several children with the improper Anna Weller. Despite this fact, Pope Leo X awarded him the Golden Rose in 1518 , the Pope's highest honor for special services to the Catholic Church, but in reality to persuade him to hand Luther over to the heretic court.

Friedrich III. lived according to the religious practices of his time: daily attendance at mass , religious devotion , devotion to Mary and saints , cult of relics . He collected relics with real passion - over 19,000 with the equivalent of around two million years of indulgences . The relics that he brought back to the Holy Land from his pilgrimage in 1493 formed the basis of his collection, which he expanded as planned, so that he finally had the third largest collection of relics of his time. Lucas Cranach the Elder Ä. made a detailed description with woodcuts for this sanctuary collection in the Wittenberg Castle Church in 1509 . Cranach was the successor to Jacopo de 'Barbari, who worked for Friedrich from 1503 to 1505 .

The University of Wittenberg , which he founded in 1502, developed into one of the most important universities in the following decades. During the lifetime of Friedrich III. Its importance lay primarily in the devotion to Renaissance humanism , which he promoted , later it gained international importance as the starting point and training center of the Reformation.

Friedrich built numerous palaces new or let them fundamentally reshape: Among other things Schloss Wittenberg , Hartenfels Castle in Torgau and Colditz Castle . Friedrich III. called Lucas Cranach the Elder in 1505 as his court painter to Wittenberg.

On August 8, 1507, King Maximilian I Friedrich conferred the position of general governor at the Diet of Constance . After Maximilian returned from Trento on February 4, 1508 after being elected Roman emperor , the office of governor expired. The dignity of imperial vicar appears for the first time on coins ( Locumtenenstalern ) of the Elector of Saxony in the form of "Imperique locumtenens generalis" (Latin = imperial governor).

The political reform thinking of Frederick the Wise, which aimed to strengthen the territorial princes and at the same time reduce the power of the imperial central authority and weaken the increasingly greedy papacy , probably also prompted him to support Martin Luther's rebellion. Curbing the rising financial demands of the Renaissance popes, papal financial practices and the acting on aggrandizement Papal States were at the forefront of the political action of the Saxon electors and certainly not the theological reflections of Luther, where he faced cautious. He never received Martin Luther personally during his reign. The role of mediator between the elector, the reformer and the pope was often taken on by the chief secretary and treasurer Degenhart Pfaffinger, who has been loyal to the elector since their pilgrimage to the holy grave .

The refusal of Frederick III to recognize the heretic judgment passed by Rome in 1518 against Luther, the assurance of safe conduct for Luther to the Reichstag in Worms and his accommodation in the Wartburg after his ostracism resulted in an open conflict of interests between the Saxon Elector and the Roman Curia or the emperor. This persistent determination, but also his reluctance to intervene militarily in conflicts, with which the Wettiner implemented his basic political attitude striving for balance, earned him the nickname Friedrich the Wise in later historiography .

Many historians also attribute the nickname to his deliberate action when he succeeded Maximilian as emperor. For in the election of the Roman-German king in 1519 the Elector of Saxony played a crucial role: on the one hand, it was Frederick the Wise first as a candidate by Pope Leo X supports consisting of the interest of the Papal States at this time neither of the two main competitors, the French king Franz I and the Emperor's grandson Karl , who had been crowned King of Aragon as Charles I in 1518 , as emperor. On the other hand, the French side also temporarily accepted the Saxon elector as a compromise candidate. So he would have had a good chance of being elected by the electors . But he rejected the emperor's dignity in the run-up to the election and preferred to act as a mediator in the electoral college. Finally, on June 28, 1519, the 19-year-old Habsburg was unanimously elected in Frankfurt . Charles V had to sign the electoral surrender , which was mainly drafted by Frederick the Wise and spoke out against the central imperial power and in favor of greater codecision power for the imperial estates . 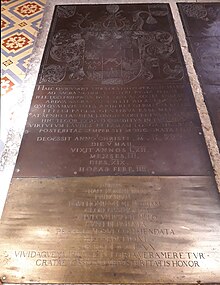 Grave of Friedrich III. in front of the main altar in the Wittenberg Castle Church

Frederick the Wise, who defended Luther from ecclesiastical jurisdiction as well as from the enforcement of imperial eighth, made a decisive contribution to the spread of Reformation ideas with his quiet and persistent manner . He was one of the few princes who opposed the annihilation of the peasants during the peasant wars . He was of the opinion that the demands of the peasants should be met. Only on his deathbed did he have communion served in a Protestant way, which can be seen as a late confession of the Protestant denomination. With him the last resistance to a war with the peasants died.

Friedrich the Wise was buried in the Wittenberg Castle Church which he built and equipped. His brother John the Steadfast took over after Frederick's death Electorate .

Commemorative coin for the 400th anniversary of the Reformation in 1917 , 3 Mark Friedrich the Wise