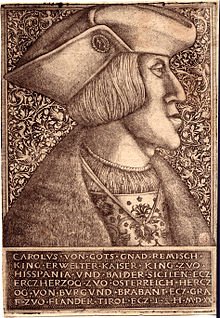 Emperor Charles V had been in the city since Wednesday, November 28, 1520. Karl was only crowned on October 23, 1520 in Aachen Cathedral by the Archbishop of Cologne, Hermann V von Wied .

80 princes, 130 counts and ambassadors from foreign kings and lords took part. They all had their retinue with them, councilors, clergymen, knights, servants, servants. More than 10,000 guests are said to have stayed in Worms. The city of Worms with its almost 7,000 inhabitants had to organize this logistical challenge. The billeting of the participants in the Reichstag and their entourage was on the one hand a heavy burden for the city, but on the other hand it was also a considerable business.

The papal nuncio, Hieronymus Aleander , was no longer safe during the day of his life after calling for action against Martin Luther on February 13 . A violent intervention by the Reich Knight Franz von Sickingen seemed possible. The mood in the population of Worms was pro-Lutheran. A printing company brought works hostile to the Church, Ulrich von Hutten's writings and pamphlets to the people.

The Lent was ignored prostitution there were many places and there were tournaments held. In the city, “everything was wild and desolate”, three or four people often lost their lives a day, reports contemporary witness Dietrich Butzbach on March 7, 1521.

The Reichstag ended with a Reich farewell .

An imperial regiment under the chairmanship of Ferdinand (I) (1503–1564), the brother of Charles V, which was supposed to represent the emperor during his absence, was set up at the request of German princes. It had already been laid down in his electoral surrender as a condition for his election as Roman king . Charles V was also King of Spain and commanded an "empire in which the sun never set". It was therefore to be expected that he would be absent frequently.

Simultaneously, a division of the two dominions Spain (Karl) and Austria (Ferdinand) was agreed between Charles and Ferdinand for the first time, the Worms Treaty of 28 April 1521. This house contract included the succession in Lower Austria and Inner Austria in favor of Ferdinand, in the The Treaty of Brussels (1522), which was initially kept secret , was also extended to Tyrol , Württemberg and the Vorlande , with which the Habsburg rule of Austria was consolidated in its further form. The time of this agreement is considered to be a possible date for the separation of the Austrian Habsburgs and the Spanish Habsburgs . The later assumption of the imperial dignity by the Austrians, which (with a short interruption) lasted until the end of the empire in 1806, was the result of this regulation.

The Reichsmatrikelordnung was the basic regulation to the kingdom to finance. It stipulated the extent to which the individual territories had to provide tax and defense services for the empire. The occasion was the Ottoman threat. The Reich register order thus also formed the basis for the Reichstürkenhilfe .

Gravamina of the German nation

Another point of negotiation was the Gravamina of the German nation , originally complaints from the German-speaking area against the Pope and Curia in Rome. At the Reichstag, the Gravamina and Lutheran Reformation movements merged. A committee of the imperial estates chaired by Duke Georg von Sachsen , in which the representatives of the clergy took part only briefly, collected a total of 102 complaints. This was the most extensive list of its kind. With the Diet of Worms in 1521, the Gravamina movement - previously mainly supported by the high clergy - was now exclusively a matter of the secular classes, because there were also changes in content: to the criticism of the Pope and the Curia Now came the criticism of the clergy and ecclesiastical jurisdiction in the empire. The Gravamina should be a topic again and again on subsequent Reichstag. 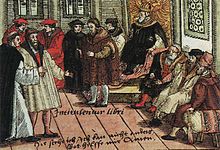 Luther at the Reichstag in Worms (colored woodcut, 1556)

From a historical perspective, the most outstanding event of the Reichstag of 1521, the appearance of Martin Luther before Emperor Charles V, was only one of a number of points negotiated in Worms for the participants and the contemporary public.

In order to be able to enforce the imperial ban against Martin Luther, Charles V issued the Edict of Worms . Since he could not achieve a majority for it in the Reichstag, he passed it immediately after the final session, but dated it back three weeks. So it is questionable whether the edict is formally part of the Reichstag at all.