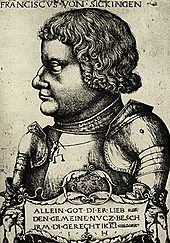 Imperial Knight Franz von Sickingen (* March 2, 1481 at Ebernburg Castle via Bad Münster am Stein-Ebernburg ; †  May 7, 1523 at Nanstein Castle via Landstuhl ) was the leader of the Rhenish and Swabian knighthood . During the transition from the Middle Ages to the modern age, he fought as a supporter of supporters of the Reformation for the secularization of church goods and led his peers in the war of knights . After the siege and surrender of his Nanstein Castle, he died there of a serious wound sustained during the bombardment.

The noble family Sickingen originally came from Sickingen in what is now Kraichgau in northern Baden . The place Sickingen was incorporated into Flehingen in 1936 , which is now part of Oberderdingen . 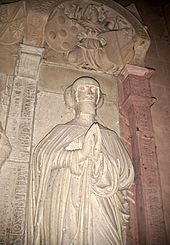 Franz von Sickingen was born in the lower Nahe , where his grandfather Reinhard had already lived . His mother was Margarethe von der Hohenburg in Lower Alsace . When his father Schweickhardt died in March 1505, he left Franz, his only son, in addition to the Ebernburg as his ancestral seat, not only a large non-territorial free float between Nahe, Lower Alsace and Kraichgau, but apparently also an important fortune, some of which was cash consisted of economic investments in silver and copper mining, partly in bonds of various imperial princes.

Franz married around 1500 - various sources name 1498 and 1499 - Hedwig from the Flersheimer family , daughter of the Electoral Palatinate bailiff of Kaiserslautern , Hans von Flersheim, and his wife Ottilie Kranich von Kirchheim , and sister of the later Speyer bishop Philipp von Flersheim († 1552). She became the mother of his six children and died on January 9, 1515, giving birth to the seventh. Until the death of his wife, Franz von Sickingen mainly took care of the consolidation of his possessions.

An older sister was Katharina (1474–1493). After she had married Orendel von Gemmingen (1464-1520) in 1491 , who was the electoral Palatinate Vogt in Germersheim and landlord in Michelfeld (today Angelbachtal) , she died in 1493 shortly after the birth of her son Weirich (1493-1548), who later moved to Handel his uncle Franz von Sickingen was involved.

Quarrel with the emperor 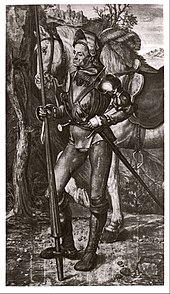 As a widower, Sickingen set out to improve the conditions of the knighthood; for more modern methods of warfare, in particular the increasing use of artillery and changes in war tactics, increasingly deprived chivalry of its former military importance, so that the knights' political influence also waned. They became economically impoverished and became increasingly dependent on the sovereigns. Sickingen's goal was to limit their abundance of power, and he also wanted to restore the knighthood and strengthen the position of the emperor.

Sickingen, who is considered to be bold and indomitable, initially fought with the imperial pay. Despite the current peace of 1495 , he led numerous feuds from 1515 on the basis of the old German feud law, which was a law of the thumb . He rejected Roman law , which was dominant in the empire , because, in his opinion, it disadvantaged the peasants and the lower nobility, which also included knights. Most of Sickingen's undertakings were tolerated by the Count Palatine near Rhine , the Palatine Elector Ludwig the Peaceful . But when Sickingen got into a dispute with the imperial city of Worms , in which Götz von Berlichingen supported him, he was ostracized by Emperor Maximilian I in 1515 .

Therefore, in order to secure his political survival, Sickingen entered the service of the French King Franz I. On his behalf he conquered the imperial city of Metz for France with a contingent of 16,000 mercenaries and 7,000 horsemen . With 20,000 gold guilders and a monthly salary for Franz's soldiers, the city bought itself free from the plunder . The successful feuds against Worms, Lorraine , Metz, the Landgraviate of Hesse and the imperial city of Frankfurt brought Sickingen an increase in political weight in the empire and further considerable wealth gains. Shortly before his death on January 12, 1519, Emperor Maximilian moved the soldier, who was dangerous to him in French service, back into his own camp.

Together with the Swabian Confederation, Sickingen placed troops nearby before the royal election in the imperial city of Frankfurt, which was scheduled for June 18, 1519, in order to support the election of the Habsburg Charles V, whose opponent was the French King Franz I. Previously, Sickingen had participated with his troops in the war of the Swabian League against Duke Ulrich von Württemberg on behalf of the Swabian Federation from March 1519. Since Sickingen suffered a loss of 766 guilders despite the federal government's payments of 27,618 guilders, he led military campaigns in the Ellwangen-Heilbronn-Gmünd area on his own account, causing great damage through pillage and the removal of people and cattle November 1519 in the northern Black Forest the Württemberg offices of Neuenbürg and Wildbad . The Swabian Federation pledged Neuenbürg to him, but Sickingen had to surrender the Wildbad, which he had illegally occupied, to the Austrian reign of Württemberg before 1522. Konrad von Sickingen, a relative who is recorded in the ducal accounting books of Stuttgart 1511–1513 as Vogt von Neuenbürg, had already drawn his attention to the advantages of the warm healing springs in Wildbad. Franz von Sickingen was using these healing springs in 1521 to treat an acute podagra attack, when he received a letter from Charles V on July 4th of this year asking him to take part in a campaign against France with 2,000 horsemen and 15,000 foot servants. After Sickingen's death in 1523, Neuenbürg came back to Württemberg. In 1525, the Württemberg regent, Archduke Ferdinand, compensated the heirs of Sickingen with 24,000 guilders instead of a territorial refund from the Neuenbürg office.

Attitude to the Reformation

In 1519 Sickingen met the humanist Ulrich von Hutten , who was seven years his junior . This conveyed to him the idea of ​​a reformation of the church “on head and members”, which aimed to radically curtail the secular role of the church and reduce it to pure preaching of the gospel .

Sickingen had campaigned for Martin Luther's cause early on and offered him asylum. While Luther did not make use of this, a whole series of other important representatives of the Reformation gathered at Sickingen's Ebernburg in the early 1520s, most of whom had lost their jobs or even had to flee because of their Lutheran sentiments. The Ebernburg therefore received by Hutten in his polemic to excommunication Exsurge Domine of Pope Leo X. against Luther nicknamed "hostel of justice."

During this time the reformers Martin Bucer , Johannes Oekolampad , Johann Schwebel , Kaspar Aquila and Kaspar Hedio stayed there. These theologians soon began to introduce ecclesiastical changes in their environment. So German-language church services and communion celebrations with Communion under both kinds is on the Ebernburg. With the beginning of Sickingen's campaign against Trier , however, the theological community dissolved; most of those named managed to get a job as pastor elsewhere.

Johann Schwebel is considered to be the actual author of the Protestant work Ein sendbrieff, published under Sickingen's name , according to Franciscus von Sickingen, who sent his Schweher , the noble and serious junior Diether von Henschuchßheym to the teaching of some great articles of the Christian faith. Date Ebernburg, on the other day Petri and Pauli 1522. The date denotes June 30th, which follows Peter and Paul Day.

Remains of the keep of Drachenfels Castle in Wasgau, which was destroyed in 1523 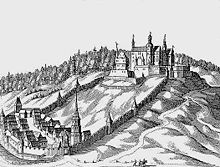 Nanstein Castle above Landstuhl as a renaissance castle after reconstruction (copper engraving by Matthäus Merian , 1645)

In 1521 the successful military leader Sickingen had become the idol of the lower nobility, who found themselves struggling between the financial economy of the flourishing cities and the power interests of the territorial lords. Assuming the consent of the new emperor Charles V , elected in 1519 , Sickingen continued his previously successful feud policy. a. against the cities of Strasbourg and Cologne . However, the conflict with the southern German cities brought Sickingen into financial difficulties for the first time, to which the poor payment behavior of Emperor Charles contributed, to whom Sickingen owed almost 100,000 guilders from 1521 - partly as a cash loan , partly as an expense for the recruitment of mercenaries for a then failed campaign in France .

In 1522, Sickingen, as leader of the Rhenish-Swabian knighthood ( Landau unity ), attempted to secularize the electorate and archbishopric of Trier in the spirit of the Reformation. With the attack on Trier he began his “Pfaffenkrieg”, which has also entered literature as “Knight's War”, “Palatine Knight Uprising” or “Trier Feud”. He had his own Ebernburg castle through Hartmut XII during this time . Defend von Kronberg .

In contrast to Sickingen's earlier opponents, his current opponent Richard von Greiffenklau zu Vollrads , Elector and Archbishop of Trier, could rely on broad support from other sovereigns. The archbishop was even the cousin of Sickingen's brother-in-law, Wolfgang von Dalberg . The imperial support that Sickingen had hoped for did not materialize, and the rebels were even banned from the Reich .

After the successful conquest of the Electorate of Trier cities of Blieskastel and St. Wendel , the siege of Trier failed in September 1522. After the winter, the coalition of princes, which included Electorate and the Electoral Palatinate under Ludwig the Peaceable and the Landgraviate of Hesse under Philip the Magnanimous , countered out. Under the pressure of their united armed forces, Sickingen had to retreat to his castle Nanstein near Landstuhl in the West Palatinate at the end of April 1523 . The fortification did not withstand the massive bombardment by the besiegers; after the unprecedented number of 600 cannonballs in a single day, Sickingen had to surrender after two days. He himself was seriously wounded during the bombardment on May 1st. According to contemporary reports, he was standing right behind an arrow slit when a cannonball struck there. The brickwork collapsed and buried the knight under itself. The serious injury he suffered to his abdomen resulted in his death on May 7th.

As early as 1510, Sickingen had acquired a share in the Drachenfels Castle in the Wasgau in southern Palatinate, 50 km from Landstuhl . Because of this, this castle was destroyed by the victors on May 10, 1523, although the castle bailiff , who was alone with eight servants, had surrendered it without a fight in view of the overwhelming odds. The Ebernburg and all other castles that had been completely or partially owned by Sickingen were taken over by the coalition of princes in the following weeks.

In 1542, 19 years after Sickingen's death, his sons were reinstated in the old rights of the family, but had to recognize the feudal sovereignty of the Electoral Palatinate. They also introduced the Reformation to the rest of their territory. The bullet-riddled Nanstein Castle was up in the second half of the 16th century and again in a Renaissance castle rebuilt. Destruction in 1668 by Elector Karl Ludwig von der Pfalz and in 1689 by French troops in the Palatinate War of Succession made the complex permanently in ruins .

The various branches of the family reverted to Catholicism in the 17th and 18th centuries .

Although Sickingen had failed in his efforts to help knighthood to flourish again and he had probably only inherited the knightly title without ever having been knighted, some people gave him the title of "Last Knight" with full respect . He shares this honorary title with his contemporary Emperor Maximilian I. 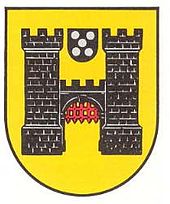 On the occasion of the 500th birthday, various cities and municipalities came together to form an interest group, jointly published a Sickingen newspaper and since then have been calling themselves - sometimes unofficially -  Sickingenstadt . Bad Münster am Stein-Ebernburg, Bretten , Landstuhl and Oberderdingen belong to the community of interests . 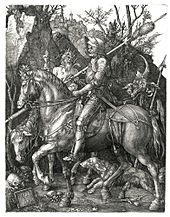 Cultural events and literary works go back to Sickingen's name or deal with his life.