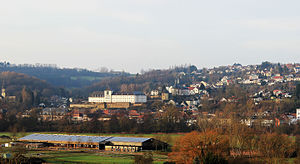 Blieskastel ([ bliːsˈkastl̩ ], listen ? / I ) is a town in the Saarpfalz district in Saarland , Germany . It is located about 15 km southwest of the district town of Homburg and 25 km east of the state capital Saarbrücken . Blieskastel has a unique urban complex in Saarland and is characterized by its baroque architecture.

Blieskastel is the main town in the Bliesgau and is located in the center of the Bliesgau Biosphere Reserve . The city borders on the cities of Homburg, St. Ingbert , Zweibrücken and Hornbach , the municipalities of Gersheim , Kirkel and Mandelbachtal and the French department of Moselle . The Blies flows through Blieskastel . The districts of Niederwürzbach, Lautzkirchen and Alschbach are located in the Sankt Ingbert-Kirkeler forest area .

The annual precipitation is 835 mm and is therefore in the upper third of the values ​​recorded by the measuring points of the German Weather Service . 70% indicate lower values. The driest month is April; it rains most in December. In the wettest month, about 1.5 times more rain falls than in the driest month. The seasonal fluctuations in precipitation are in the lower tenth. In only 3% of all places, the monthly precipitation fluctuates less. 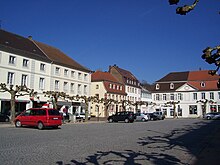 The Paradeplatz in Blieskastel

View from the Agd to the Blieskasteler Schlossberg

The urban area covers an area of ​​108.27 square kilometers.

The urban area is used as follows: 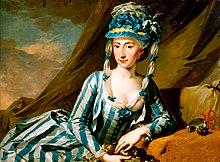 The former Blieskastel Castle was the seat of the Counts of Blieskastel, who died out in 1237. The daughter of the last count, Elisabeth, founded the Gräfinthal monastery in Gräfinthal in 1234 . Castle and rule came to the Counts of Salm , then in 1284 to Bishop Burkhard von Metz , who transferred them to von Finstingen. Since 1337 Blieskastel belonged to Kurtrier . The Counts of Veldenz are also mentioned among the Trier officials . In 1440, the Trier Elector Jakob I handed over half of the county and the "Hungericht" to the knight Friedrich von Loewenstein. In 1522 the castle was destroyed by Franz von Sickingen in his feud with the Elector of Trier. In 1553 the reign of Blieskastel was pledged to the Counts of Nassau-Saarbrücken . In the Thirty Years' War Blieskastel was depopulated.

Around 1660, the imperial barons von der Leyen , who had owned property in Blieskastel since 1456, acquired the Electoral Trier office of Blieskastel and built a new castle in 1661–1676 on the site of the old castle . Blieskastel experienced a new boom under the Count von der Leyen in the 18th century, when they moved their residence from Koblenz to Blieskastel in 1773 and expanded the Blieskastel area into a residential town. A cultural center was established in Blieskastel under Countess Marianne von der Leyen , a born baroness von Dalberg . Lively building activity developed. The residential palace was further expanded and a number of excellent palaces and mansions for the court officials of the small residence were built on the Schlossberg, including the so-called "Schlößchen", which is attributed to the Zweibrücken building director and architect Christian Ludwig Hautt . Other master builders also worked, such as AGF Guillemard, Matthias Weysser, Peter Reheis and the master carpenter Franz Schmitt. During this time the former Franciscan monastery church , the former orphanage and the government building were built.

With the French Revolution , the von der Leyen were expelled in 1793 and their residential palace plundered and subsequently destroyed. The remains were removed in 1802. In 1795, Blieskastel, like the entire area on the left bank of the Rhine , came under French government and in 1798 became the capital of the canton of Blieskastel in the Saar department .

With the defeat of France in 1814, the area to the left of the Rhine that belonged to France initially became part of the Central Rhine General Government . The canton of Blieskastel had been under the joint Austrian-Bavarian State Administration Commission since 1814 . On April 14, 1816, Austria and Bavaria closed a compensation deal, after which the Rhine district, later Palatinate (Bavaria) , was allocated to the Kingdom of Bavaria . As a result, the canton of Blieskastel was placed under the district directorate of Zweibrücken on May 1, 1816 and in 1818 came to the state commissioner in Zweibrücken , and in 1902 to the newly formed district office of St. Ingbert .

From 1920 to 1935 Blieskastel belonged to the Saar area , which was placed under French administration for 15 years with a mandate from the League of Nations. During the Nazi era, Blieskastel was ruled from Saarbrücken, until 1935 as part of Pfalz-Saar, until 1940 as part of Saarpfalz and until the end of the war together with Lorraine as "Westmark". After the Second World War , the city of Blieskastel was initially in the French zone of occupation and from 1947 to 1956 in the (partially) autonomous Saarland , which became part of the Federal Republic of Germany as a federal state after the second Saar Statute was rejected on January 1, 1957 .

In the course of a territorial and administrative reform with effect from January 1, 1974, Blieskastel, which until then belonged to the district of Sankt Ingbert , became part of the newly created Saar-Pfalz-Kreis (today Saarpfalz-Kreis ). At the same time, the city of Blieskastel was expanded to include surrounding communities.

Blieskastel has been a state-approved Kneipp spa since 1978.

The first documentary mention in 1098 is Gottfried, comes de Castele . The old name Castel or Kastel is still popular. The river Blies provided the defining word for the place name. In the neo-Latin writings of the 18th century, the name Bliescastel was reproduced as castellum ad Blesam (fort on the Blies). Until January 24, 1904, Blieskastel was led under the spelling Bliescastel . With Kastel disease, the residents of the surrounding area tease the idleness of the Kastel people .

After the local elections , most recently on May 26, 2019 , the distribution of seats was as follows:

Since the local elections in 2019, the SPD and the Greens have formed a cooperation in the city council.

The coat of arms is described as follows: Standing in silver on green ground, Saint Sebastian, tied to a green tree, clad with a golden loincloth and pierced by golden arrows, in natural colors and with golden hair. It was approved on June 3, 1983.

Blieskastel maintains community partnerships with the French community Le Creusot in Burgundy (since 1989) and with the Italian community Castellabate in Campania (since 2008). 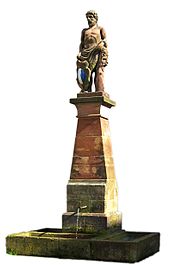 The long building ( orangery ) in Blieskastel, the rest of the palace complex

The Gollenstein , a menhir near Blieskastel 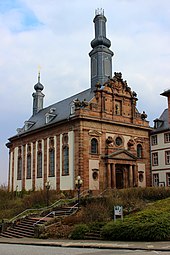 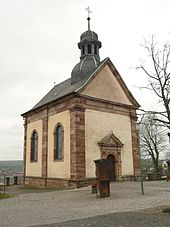 Altarpiece Our Lady with the Arrows in the Holy Cross Chapel

The historic town center with the Blieskastel town hall (built in the 18th century as an upper office and orphanage), the Hercules fountain from 1691 and the Napoleon fountain ("snake fountain ") from 1804 is shaped by the Baroque era , from which the court council houses on Schlossberg also originate . Of these court council houses, the so-called “Schlößchen” from 1776/77, which is considered the work of the Zweibrücken building director Christian Ludwig Hautt , is particularly worth seeing . The Alt-Blieskastel ensemble comprises a total of 133 individual monuments and a further 65 buildings under ensemble protection . The city lies on the Baroque Street Saar-Palatinate .

The castle once stood above the town, most of which was destroyed during the French Revolution . The original twelve-axis long building ("orangery") built in the 17th century has been preserved. The building was restored from 1982 to 1986 and is used for lectures, exhibitions and concerts.

To the west, above the former palace complex, is the former monastery church of the Franciscan recollects and today's Catholic parish church , which was built from 1776 to 1778 and which took on the role of a "castle church" from 1778 to 1793 and is also known colloquially today. The plan of the church is from a Franciscan master builder named Minder, the construction was directed by the Count's building inspector Peter Reheis.

Further north on the “Han” stands the Blieskastel pilgrimage monastery , which has been looked after by the Franciscan Minorites since 2005 .

In the Holy Cross Chapel at the pilgrimage monastery, the miraculous image of Our Lady with the Arrows has been located since 1827 , which was transferred from Gräfinthal to Blieskastel in 1786 . This miraculous image is a unique Pietà (Vespers image) from the 14th century, in which five iron, medieval arrowheads are stuck. According to legendary tradition, the arrows were shot in by wicked people. The chapel, in which a cross relic was originally venerated, dates from 1682/83.

A neo-baroque Protestant church from 1912 stands on a southern hill .

The landmark of the city is the approximately 4,000 year old Gollenstein , which at 6.5 m is considered to be the largest menhir in Central Europe. He stands on the ridge near Blieskastel.

Since April 2012 Blieskastel has been a member of Cittaslow , a worldwide association of cities founded in Italy in 1999, which is committed to healthy, enjoyable food made from local products, the sustainable strengthening of regional culture, hospitality, a gentle and humane development of the infrastructure, the preservation the landscape and active environmental protection.

The clock museum "La Pendule" in Blieskastel mainly exhibits clocks from the Baroque period from the end of the 17th to the 20th century.

Blieskastel is the hometown of the former Bundesliga handball team TV Niederwürzbach . However, the club did not play its home games in Niederwürzbach , but in the sports center of Homburg-Erbach . In addition, the fistball department of TV Blickweiler played in the fistball Bundesliga in the indoor season 80/81 . The local soccer club Sc Blieskastel-Lautzkirchen ev. Was founded in 1893 and the first team of SC Blieskastel-Lautzkirchen plays in the Saarland Regional League East.

Since the timetable change on May 23, 1991, the main town of Blieskastel has no longer had any rail passenger traffic . The Bliestalbahn from Homburg ↔ Zweibrücken via Bierbach, Blieskastel to Reinheim was converted into a bicycle path over a length of almost 15 km at the end of the 1990s, which now extends to Saargemünd on the French side . From 1916 to 1945, Brenschelbach was the end point of the Hornbach Railway, which began in Zweibrücken .

The federal highway 423 runs through the city area. Coming from France and Mandelbachtal , it crosses Aßweiler and Biesingen, leads from the plateau down to Blieskastel, crosses the Blies and continues through the district of Webenheim to the federal motorway 8 and to Einöd .

Other important roads are:

The rehab clinic Bliestal Kliniken with 500 beds is the largest employer in Blieskastel. The largest industrial company is the Hager Group , which has around 11,000 employees worldwide.

Blieskastel is a branch of the found local court Homburg , which the district court and - OLG -Bezirk Saarbrücken belongs. The branch was closed on September 30, 2011.

Blieskastel is an important school location beyond the region. In addition to nine primary schools, there is the Von der Leyen Gymnasium , a community school (Geschwister-Scholl-Schule) and a special school (Franz-Carl-Schule) for students with learning disabilities.

Municipalities in the Saarpfalz district