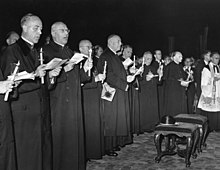 Cardinal Wendel at the 76th Katholikentag in Fulda (far left), 1954 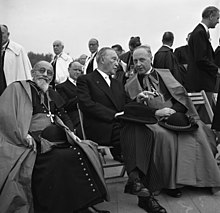 Joseph Wendel (right) next to Konrad Adenauer (center) and Bishop Karl Christian Weber at the final rally of the 77th Catholic Day in Cologne , 1956

Grave site in the Frauenkirche in Munich , 2012

Joseph Wendel was born in Blieskastel, then part of the Bavarian Palatinate . After high school and university he received in the October 30, 1927 Rome by Basilio Cardinal Pompili the priesthood .

In 1941 he was appointed by Pope Pius XII. appointed titular bishop of Lebessus (Lebissos) in Lycia and appointed coadjutor bishop of the Speyer diocese . He received his episcopal consecration on June 29, 1941, Bishop Ludwig Sebastian from Speyer ; Co- consecrators were the Bishop of Würzburg , Matthias Ehrenfried , and the Bamberg Auxiliary Bishop Joseph Otto Kolb . On May 20, 1943, Wendel took over the office of Bishop of Speyer. On November 7, 1952, he was enthroned as successor to Michael Cardinal von Faulhaber on the chair of the Archbishop of Munich and Freising.

On January 12, 1953, Pope Pius XII. Wendel as Cardinal Priest of Santa Maria Nuova in the College of Cardinals .

In 1956 he became the first military bishop of the newly founded Bundeswehr . In 1960 he organized the World Eucharistic Congress in Munich, which also marked the theological high point of his career.

He died of a heart attack after the New Year's Eve sermon in 1960 in the bishop's court.

Wendel was an honorary member of the KDStV Aenania Munich and the KDStV Tuiskonia Munich in the CV as well as the KSSt.V. Alemannia Munich in the KV . Joseph Wendel joined the movement of the same name as a chaplain after a retreat in Schoenstatt . In addition to his work as director of the Episcopal Study Home in Speyer, he led the Schoenstatt Movement in the Diocese of Speyer. The retreat for his episcopal ordination was held by the founder of the Schoenstatt Movement, Father Josef Kentenich .

The bishop's coat of arms shows in fields 1 and 3 a white cross on a blue field, the diocese coat of arms of Speyer. In fields 2 and 4 the personal coat of arms, on a blue background above a wavy band a white dove and below a crown. The crown stands for the kingdom of Christ (Christ the King), the water above it symbolizes the water of baptism through which one enters the kingdom of Christ. The dove stands above it twice: As a symbol for the Holy Spirit of love and truth.

The words of his coat of arms, "Veritati et Caritati", refer to the realm of truth ("Veritati") and love ("Caritati"), which Cardinal Wendel wanted to serve: especially in times of disregard for faith such as during the Third Rich when Joseph Wendel chose the saying.