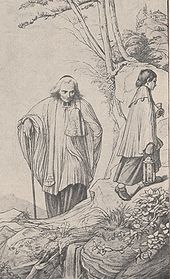 Country pastor carries the Viaticum across the mountains, drawing by Eduard Jakob von Steinle , 1864, the artist giving the depicted pastor the facial features of his friend Bishop Nikolaus von Weis

Nikolaus von Weis (born March 8, 1796 in Rimlingen (Lorraine), † December 13, 1869 in Speyer ) was a German theologian and from 1842 to 1869 bishop of the Roman Catholic diocese of Speyer . He was an important figure in the rebuilding of the diocese after the period of secularization .

Nikolaus von Weis was born in 1796 on the Schönhof in the municipality of Rimlingen in Lorraine . His mother did not want her child to be baptized by a pastor who had taken the oath on the constitution of the French Revolution . So his father, a shepherd, packed the newborn in his shepherd's bag at night and picked up the godfather in Obergailbach . They marched to the Niedergailbach church , where he was then baptized.

Nikolaus spent his early years in the parish of Habkirchen . After the death of his father, the family moved to Altheim in 1802 . There, as well as in Niedergailbach and Ormesweiler , Nikolaus attended elementary school and received Latin lessons. His school attendance was repeatedly interrupted because of the poverty of his family. From 1811 to 1818 he attended grammar school at the Episcopal Seminary in Mainz , then studied in the seminary there under Regens Bruno Franz Leopold Liebermann . Weis was ordained a priest on August 22, 1818 in Mainz by Bishop Joseph Ludwig Colmar and celebrated his first mass in the church of St. Stephan , assisted by "the worthy pastor Johann Peter Merz " . Weis and Merz knew each other from their time in Mainz and remained “close friends” throughout their lives.

During his studies he had already joined the Alsatian group, the so-called Mainz circle around Andreas Räß , who later became the bishop of Strasbourg. Together with him he founded the monthly Der Katholik in 1821 . Nikolaus Weis worked as a teacher at the Mainz seminar for three years. In 1821 he received the Dudenhofen parish . In 1822 the theological faculty of the University of Würzburg appointed him Doctor h. c.

In 1822 the cathedral chapter of the Diocese of Speyer was rebuilt and Nikolaus von Weis was promoted to cathedral capital . On January 1, 1839, he received the Knight's Cross of the Order of St. Michael . In 1842 he was appointed bishop by King Ludwig I of Bavaria and on July 10, 1842 he was consecrated as a bishop by Archbishop Lothar Anselm Freiherr von Gebsattel in Munich .

Bishop Nikolaus von Weis died on December 13, 1869 and was buried two days later in Speyer Cathedral. The funeral sermon, which was also published in print, was given to him by Cathedral Pastor Dietrich Becker . In his obituary he was described as the ideal of a Catholic bishop; one of the relevant passages read:

“ And in the most distant and poorest village in the mountains, the children who have seen him will remember him well into their old age and will believe that every bishop must look like him: so perfect was the image and nature of the Departed. "

Nikolaus von Weis worked as a writer together with Andreas Räß . They expanded and translated several apologetic , dogmatic and hagiographic works, brought out a German edition of Butler's Lives of the Saints (24 volumes, 1821–1827) and translated sermons from French. They founded the monthly magazine Der Katholik and published it from 1821 to 1841. They did not shy away from the harshest polemics, such as the tirade against Heinrich Heine and “Junge Deutschland” .

As early as 1839 as cathedral chapter he rebuilt the teacher training seminar in Speyer, promoting education was a major concern of his.

During his time as bishop he tirelessly devoted himself to the organizational, social and spiritual rebuilding of his diocese. In 1852 he founded the Institute of the Poor School Sisters of St. Dominic and in 1857 confirmed the establishment of the Poor Franciscan Sisters of the Holy Family in Pirmasens by Paul Josef Nardini . He founded a children's home in Landstuhl .

He brought the pilgrimage to a new bloom, in particular he promoted the pilgrimage to Maria Rosenberg in Waldfischbach . The chapel was closed in 1822 by the Bavarian state for alleged abuse and was reopened in 1844.

His efforts to found a theological seminary in Speyer were not supported by the Bavarian government. In June 1844, Weis visited the Synagogue in Ingenheim , a remarkable approach of a bishop to the Jewish population for the time, as it was only recorded again in Germany during the Weimar Republic . In the synagogue, he warned the school children to cling to the religion of their fathers.

In 1845, Bishop von Weis opened a convent of the Minorites in Oggersheim near Ludwigshafen to take care of the pilgrimage there.

Nikolaus von Weis founded the first cathedral building association in Speyer in 1853 . During his tenure, the cathedral was painted from 1846 to 1853 by Johann von Schraudolph and the west facade was renovated until 1858.

The Speyer priest Dr. Jakob Weis and his great-nephew, Prelate Dr. Norbert Weis both come from the family of Bishop Weis.

Chapel of the Nikolaus von Weis School of the St. Dominikus Institute in Speyer

Because of his proverbial hospitality and charity, the Speyer priest- writer Conrad von Bolanden describes him in his novel The Enlightened in 1864 as the "innkeeper of the Golden Cross, which the poor call their father."

In Speyer, a street and two schools (Nikolaus-von-Weis-Gymnasium, Nikolaus-von-Weis-Boarding School) are named after him. In Landstuhl , a street and the "Bischof von Weis Foundation" with three institutions (private vocational school "Haus Nazareth", St. Nikolaus children's home and Bischof von Weis school) are named after him.

During his time as bishop, Bishop Anton Schlembach used the bishop's staff that Nikolaus von Weis had received in 1867 for his bishop's jubilee.