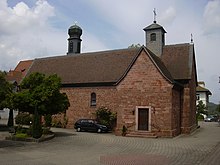 Maria Rosenberg is a place of pilgrimage in Waldfischbach-Burgalben , which includes a conference center for retreats and seminars ("Spiritual Center" of the Speyer diocese ). In addition, there is a Caritas old people's center on the Rosenberg as well as a house for child and youth welfare, which is sponsored by the St. Josef youth welfare association in Landau- Queichheim .

Whether the so-called “Rodenberg” was a sacred place in pre-Christian times is not documented. The Rosenberg fountain of grace, which has long been valued by pilgrims, gave rise to the assumption whether the Celts, as in many other comparable places, worshiped a spring dedicated to the storm god Donar , which was then consecrated to Mary after Christianization .

The Rosenberg Gnadenkapelle, which dates back to the 12th century, is the first historical evidence that suggests a pilgrimage tradition. But their origins also lie in the dark of history. It is unclear whether the construction was carried out from the Herbitzheim monastery near Bitsch, from the Hornbach monastery or from the Premonstratensian abbey of Wadgassen , which owned properties in Burgalben. Around 1150 the middle part of today's chapel, the so-called original chapel, was built. The shrine was probably consecrated to Our Lady even then. Two opposite, now walled-up doors in the north and south indicate that the original miraculous image of the mother with the divine child , which has disappeared since the Reformation, was the destination of processions. The choir was built around 1250 and the chapel was extended to the west in 1430. The increasing number of visitors to the chapel led to the establishment of a chaplaincy in 1430, the construction of which underlines the character of a Marian shrine.

After the setbacks during the religious split - the chapel fell to the Lutheran county of Hanau-Lichtenberg in 1570 , which prohibited pilgrimages and closed the church - and after the devastation of the Thirty Years' War , the Catholics were given their sanctuary back in 1684. From 1722 onwards the pilgrimages increased strongly. The name "Rodenberg" changed to "Rosenberg" based on the old invocation of Mary as "wonderful rose". In the thirties of the 18th century the chapel was structurally restored and expanded again to the west. A hermit took up residence on the gallery.

In 1822 the Bavarian state, with church support, ordered the chapel to be closed due to alleged abuses during the pilgrimage. At funerals in the neighboring cemetery, not even the chapel bell was allowed to ring. The pilgrims then continued their devotions, albeit outdoors in front of the closed chapel. From 1844, however, thanks to the support of Bishop Nikolaus von Weis , the pilgrimage could unfold again unhindered.

A new era began with the Rosenberg Foundation of Pastor Philipp Braun (Clausen), supported by the so-called Jörg Society. Georg Helfrich, born in 1830, known as "Bet-Jörg" because of his prayer in the chapel, a charismatic figure, made his home pastor's concern to establish a permanent priesthood on the Rosenberg his own. He joined the Third Order of St. Francis with a friend and some young women . In 1860 they formed a kind of lay spiritual community in the middle of the world. After much hostility and suspicion, the group first went to Paris in 1869. After the outbreak of the Franco-Prussian War, however, they had to leave Paris again. In 1873 the Jörggesellschaft emigrated to North America, also because there, in contrast to their poor homeland, they had more opportunities to save money to realize their plans. The Jörggesellschaft ran a farm in St. Benedict, a German colony in Iowa . In 1902, 180,000 marks from the company's savings were handed over to Bishop Joseph Georg von Ehrler with the aim of building a priestly position, a larger pilgrimage church and - according to the bishop's request - a girls' home. Georg Helfrich had died in the USA in 1895. Most of the donors were too old to return to Germany. Only two of them, Maria Anna Lickeig and Heinrich Depper, saw the completion of the buildings on site. 1912 Church and StifterHaus were Bishop Michael von Faulhaber inaugurated . The Queichheim pastor Ludwig Georgens was appointed the first director . Girls were brought up by a community of Mallersdorfer sisters who worked continuously on the Rosenberg until 2010.

The construction of the diocesan retreat house in 1931 by Bishop Ludwig Sebastian and the opening of Perpetual Adoration , which still exists today, in 1934 gave the pilgrimage new impetus. A large educational center has belonged to the pilgrimage site since 1973 and was expanded again in 1986. A new retirement and nursing home was inaugurated in 1994. In 2012, the unit that had been created over a hundred years from the retreat and education house, the house of child and youth welfare and the old people's and nursing home was separated and given to new church sponsors.

Maria Rosenberg is one of the places in which in 2015 and 2016 the “Extraordinary Holy Year ” proclaimed by Pope Francis was particularly celebrated. For this reason, on December 20, 2015 , Bishop Karl-Heinz Wiesemann reopened the long-locked Gothic portal on the south side of the Chapel of Mercy as the “Gate of Mercy” .

The core of the single-nave pilgrimage chapel dates back to the middle of the 12th century. The original Romanesque chapel was expanded around 1250 by a choir, in the 15th century by two additional nave axes and again to the west in the 18th century. At the beginning of the 1930s the chapel was completely renovated by Albert Boßlet (Würzburg). In the chapel there is the baroque Madonna made of oak, which probably came here after 1738 and was supplemented in 1934 by a halo with golden roses.

Rudolf von Pérignon (Würzburg) built the new pilgrimage church, a three-aisled hall church in the Bavarian homeland security style, and the donor's house between 1910 and 1912. The altar was made in 1925 according to designs by the Munich goldsmith Josef Seitz. The picture in the apse, dating from 1926, was made by the Munich painter Max Rauh.

Behind the pilgrimage church is the Chapel of the Cross with a statue of Christ by Dietrich Reger (Frankenthal), also designed by Pérignon and newly inaugurated as a prayer room in 2014. It is followed by an extensive park with historical trees. In the thirties of the last century the traditional fountain of grace was moved there; he is crowned by a statue of the Mother of God with outspread hands. In the park, the Lourdes grotto, built in 1913 in the old Rosenberg quarry, and a Way of the Cross from 1949 are also the destinations of pilgrims.

The guest house with the colonnades was built in the 1920s according to plans by Joseph Uhl (Pirmasens). Since 2015 there has been a large bronze relief of the Holy Family by Thomas Duttenhoefer (Darmstadt) in the pilgrimage courtyard at the “Platz des Gebets für Familien” ( prayer for families ).

Organ of the pilgrimage church

The organ of the pilgrimage church was built in 1936 by the Späth company . Your disposition: